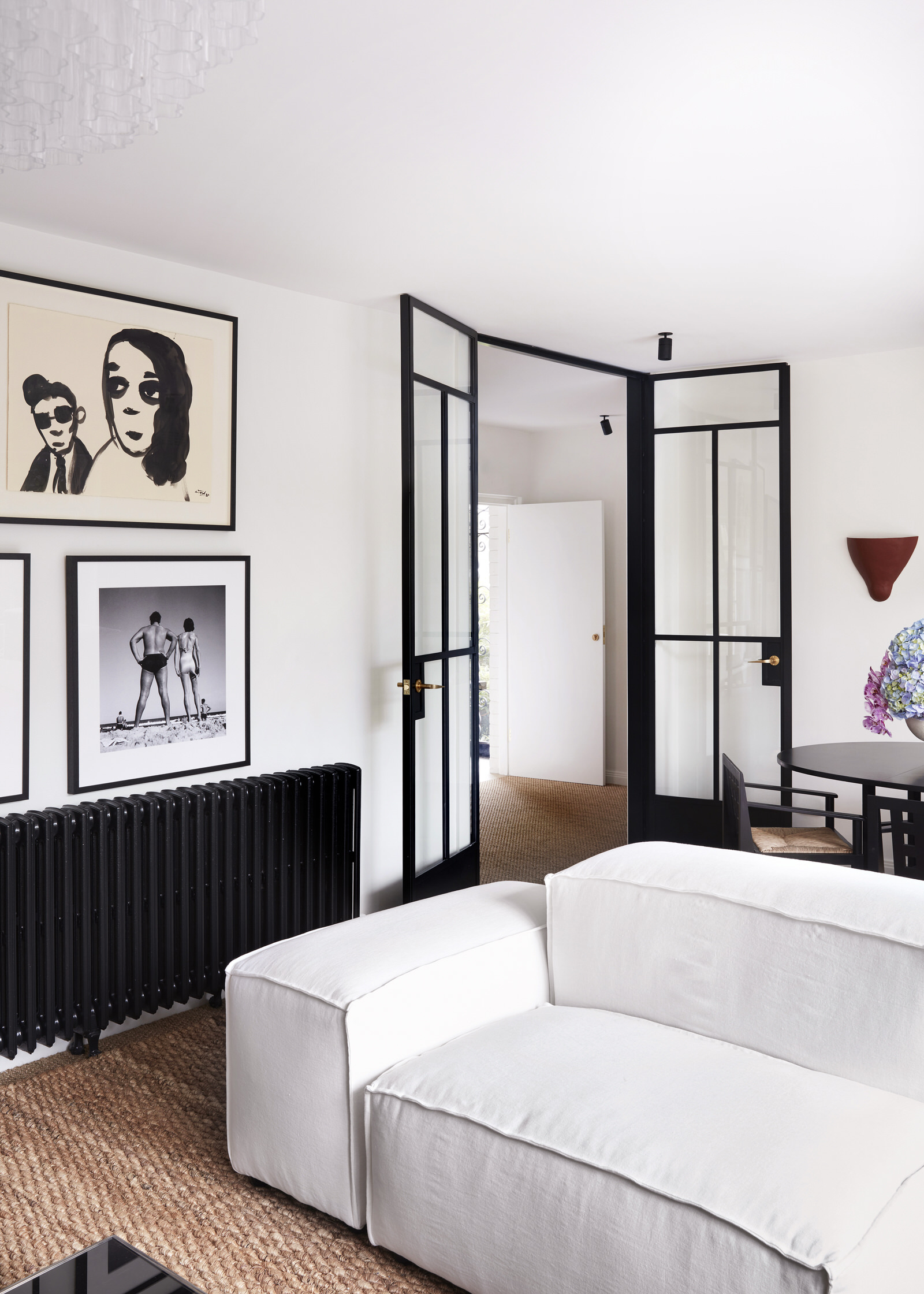 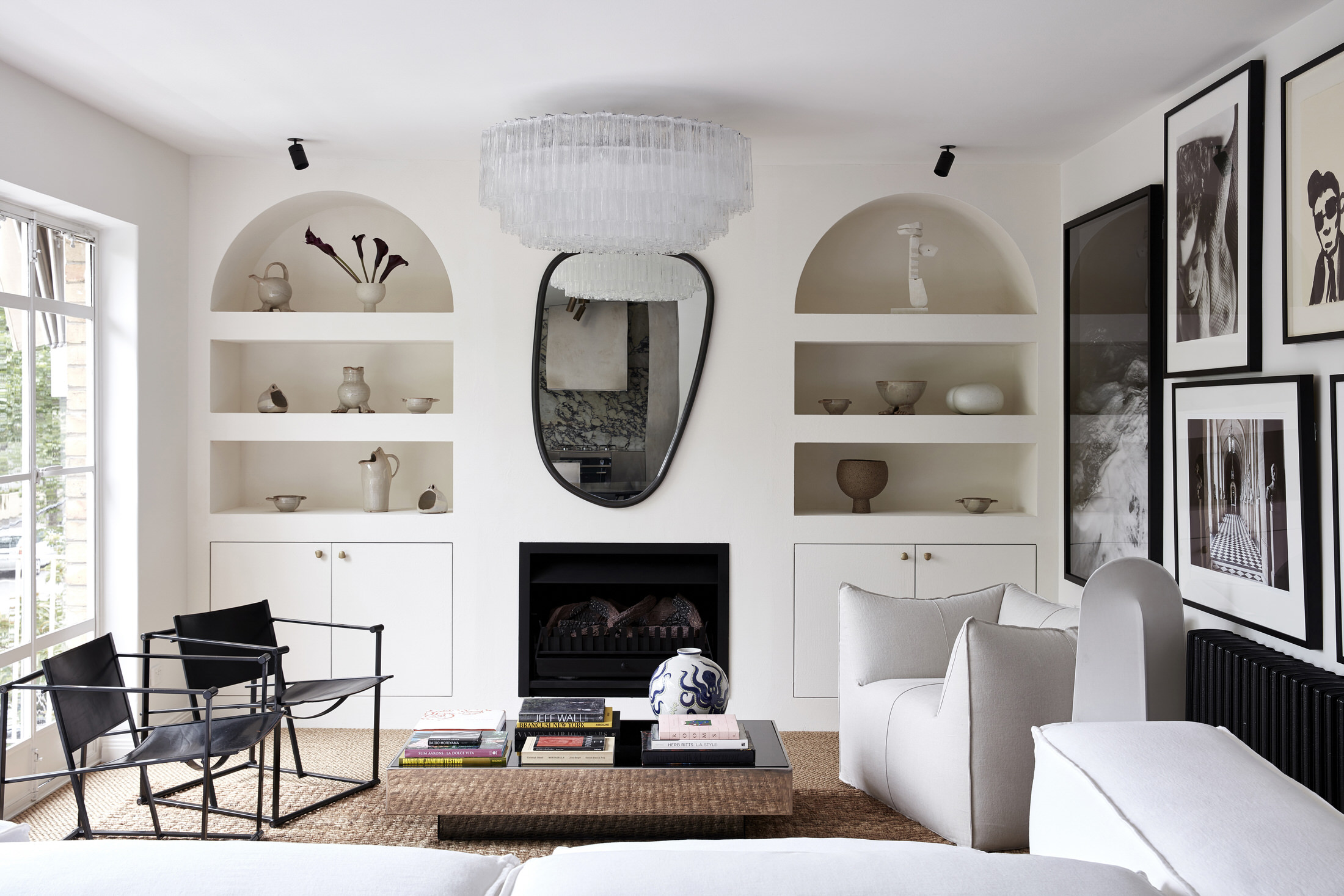 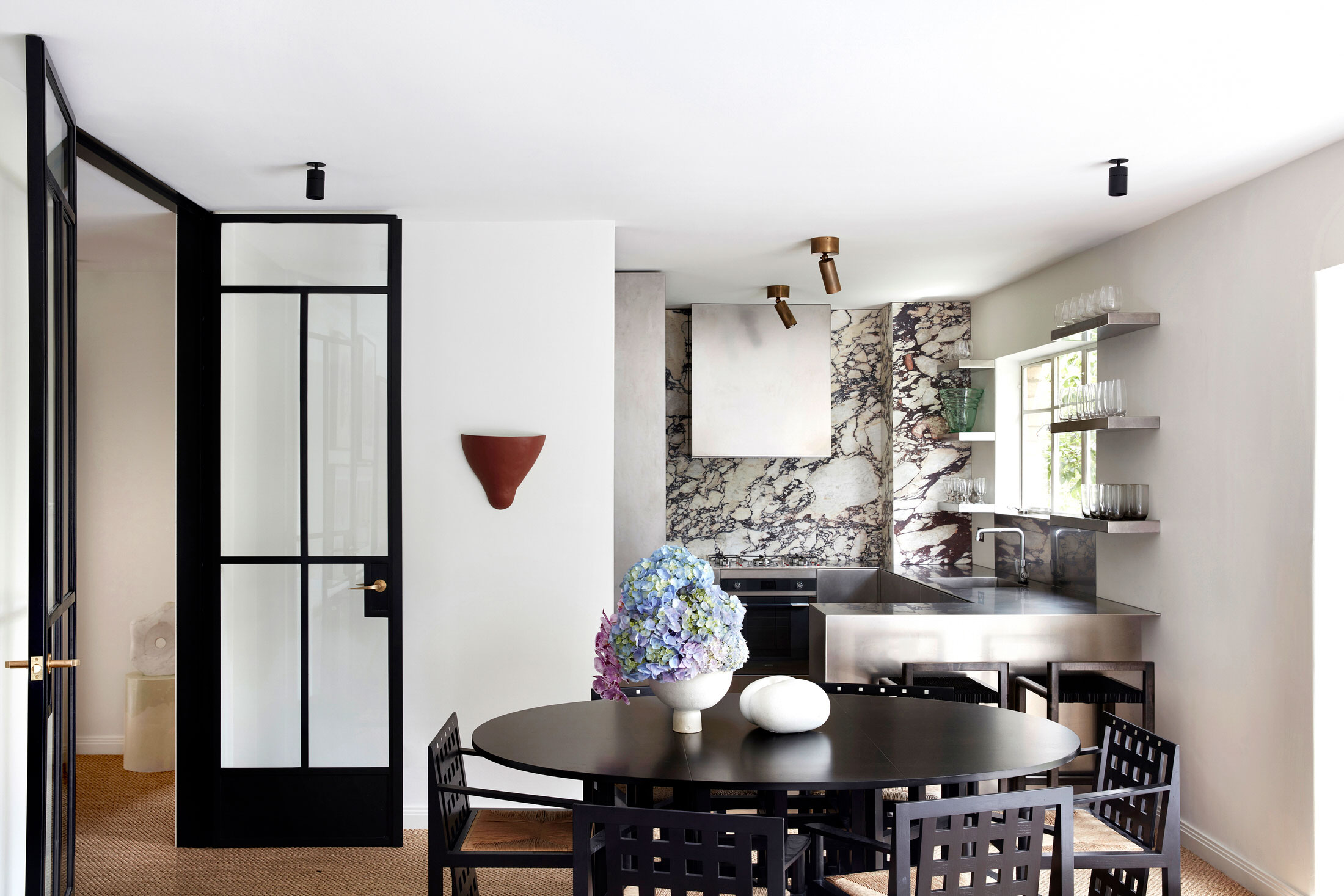 Tamsin Johnson’s international high-end residential projects reflect her signature ability to combine pieces from across decades and continents in ways that feel understated and natural. In her first book, Tamsin Johnson: Spaces for Living, the acclaimed Australian interior designer shares her ideas, images, and stories with readers, culminating in a publication that is both a rich visual resource and design reference. Written in collaboration with Australian freelance writer and book editor Fiona Daniels for Rizzoli, the book was released this September.

Johnson favours elements of surprise and a sense of play in her designs, as evident in contrasts of scale, the bold use of art, and the sculptural nature of the furniture she selects or commissions. Treehouse, one of the many projects featured in the book, is a celebration of comfort, character and user-friendly design can be felt as Johnson balances European heritage with characteristics of modern coastal Australia.

In the stylish Melbourne suburb of South Yarra, this three-bedroom apartment, at the top of a four-story art deco building, has the unique pleasure of looking out over the city’s Royal Botanic Gardens. A profusion of windows along one side follow the line of the tree canopy, their original steel frames capturing each delicate verdant vista. Even the other side of the apartment faces neighbouring greenery, so you really do feel as if you’re perched amid the treetops. Inside, the ambience was a lot less airy. The tired, old rooms looked very much the worse for wear, from shabby cupboards and carpet to major limitations such as a poky hidden kitchen, two tiny bathrooms, and a narrow entry hall leading to the living room via a gloomy solid door. “Gutting” may not be a pleasant word but it certainly conveys the scope of renovation needed here. Johnson reconfigured the kitchen, opened up and joined the two bathrooms to create a larger one, and made more of a landing at the front to create a better sense of entrance. For starters. 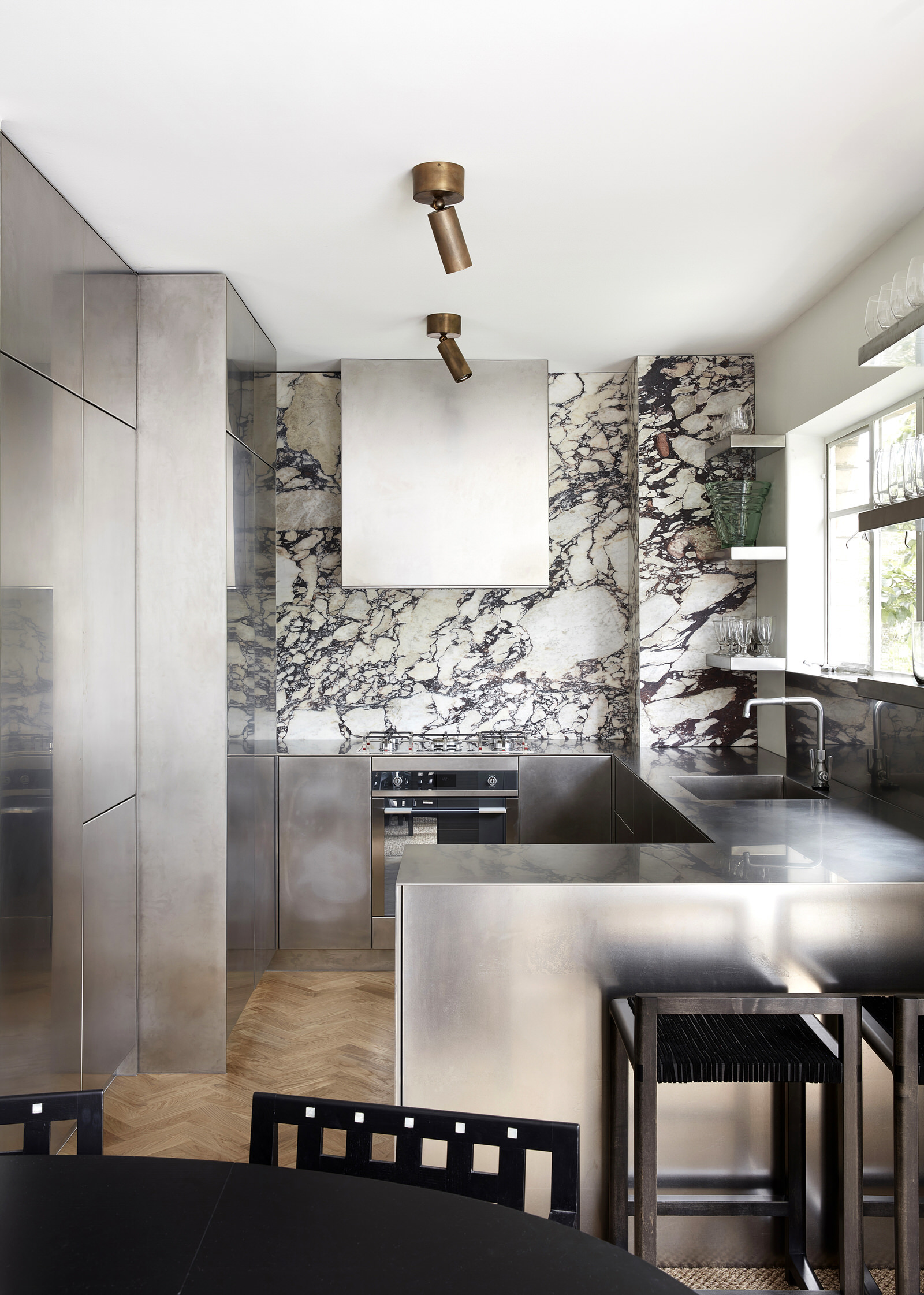 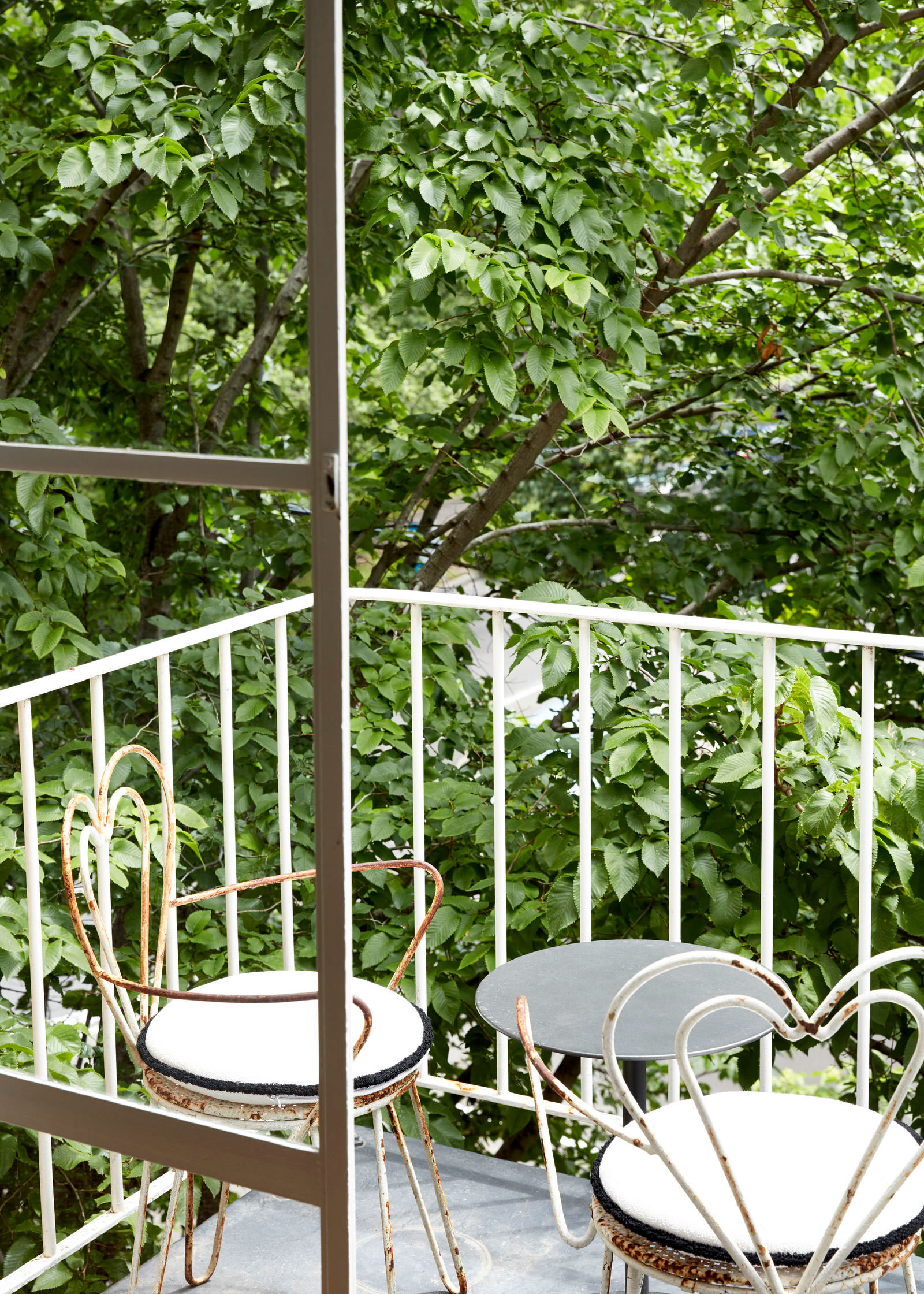 After treating the steel-framed windows to a little restoration — and restorative white paint — the solid door was replaced with a pair of steel-framed glass doors. While keeping with the style of the windows, this simple addition also created a more elegant transition between the entrance and living room, making the latter appear cozier, its own separate pace, while also letting in plenty of light. Their black frames give the doors definition and a sleek modern look that suits the owner’s lifestyle. Acting as both retreat and entertaining hub the space feels contemporary yet timeless, almost like a Parisian apartment with its elegant urban edge.

The greenery outside provided enough colour to allow for a strong monochromatic interior design, which is most fully realized in the living area. On one wall, four artworks present a vibrant grouping in black and white: a drawing by Australian actor and artist Noah Taylor, two photographs by the late Australian modernist Max Dupain and one by Sydney-based French photographer Felix Forest. The angles of their black frames echo those of the doors and meet a shapely contrast in the organic curves of a black-framed mirror on another wall. On either side of the mirror, More curves were added in the form of arched, recessed shelves in the white walls. The arches bring a little Art Deco element to the room and have a softening effect on the sharper angles elsewhere.

Below, the furniture presents another picture of contrasting shape and tone. The precise lines of a pair of 1980s Mario Botta black leather chairs echo the frames of the artworks opposite. Distinguished by their different silhouettes are the yielding, sumptuous folds of their neighbouring pieces: a Living Divani sofa in white brushed cotton and an iconic 1970s Le Bombole chair by Mario Bellini, upholstered in oatmeal linen. At the centre, the box-like design of a coffee table in stainless steel by Willy Rizzo is tempered by the natural texture of the new sisal flooring. This frisson between strong and soft, black and white, lines and curves plays out through the apartment, in different vignettes. There is a sense here that no aspect is either wholly feminine or masculine, that anything is possible. In the arched shelves sits a wonderfully unusual collection of 1920s French anthropomorphic ceramics, each with little feet and featuring a different facial part. 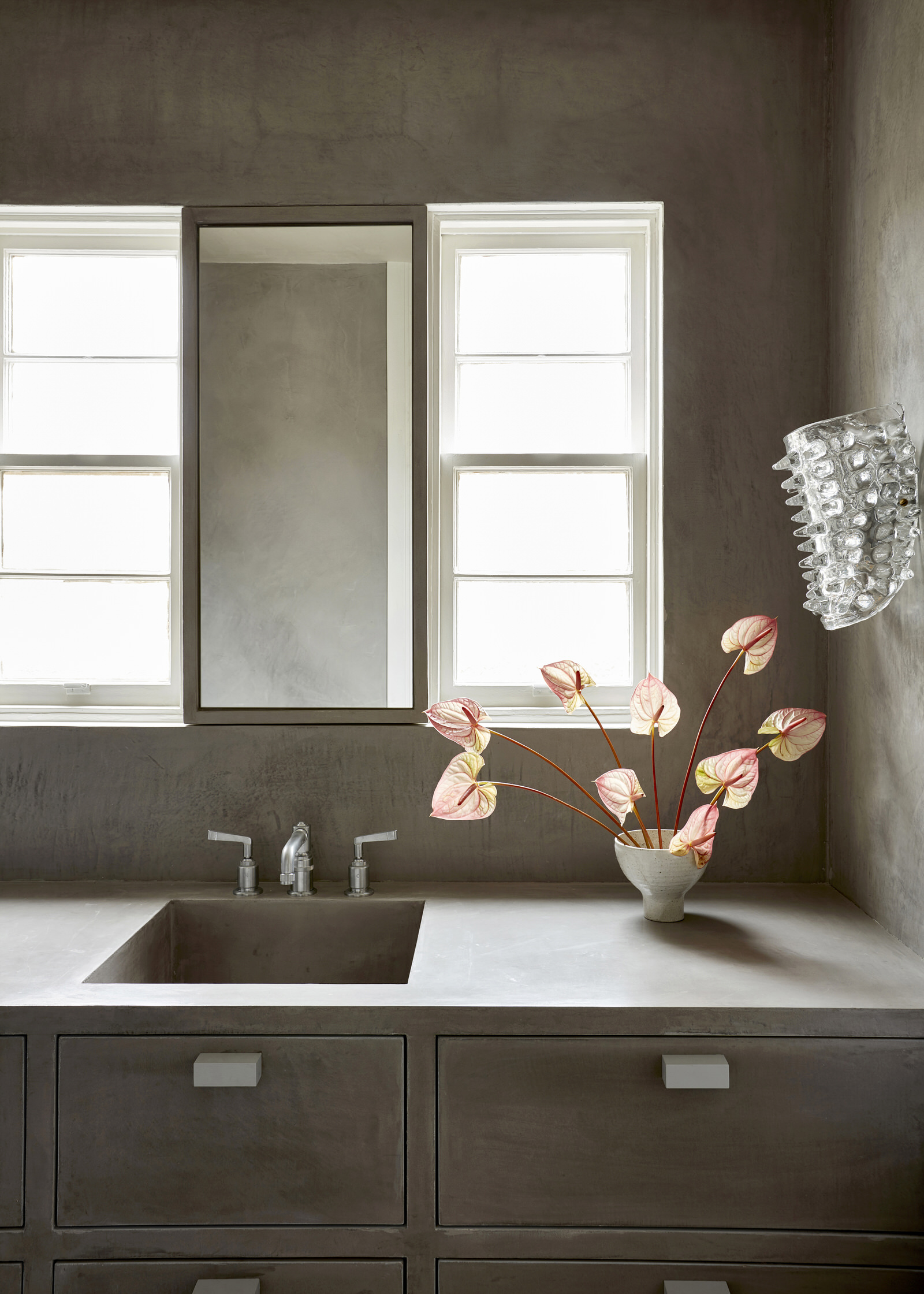 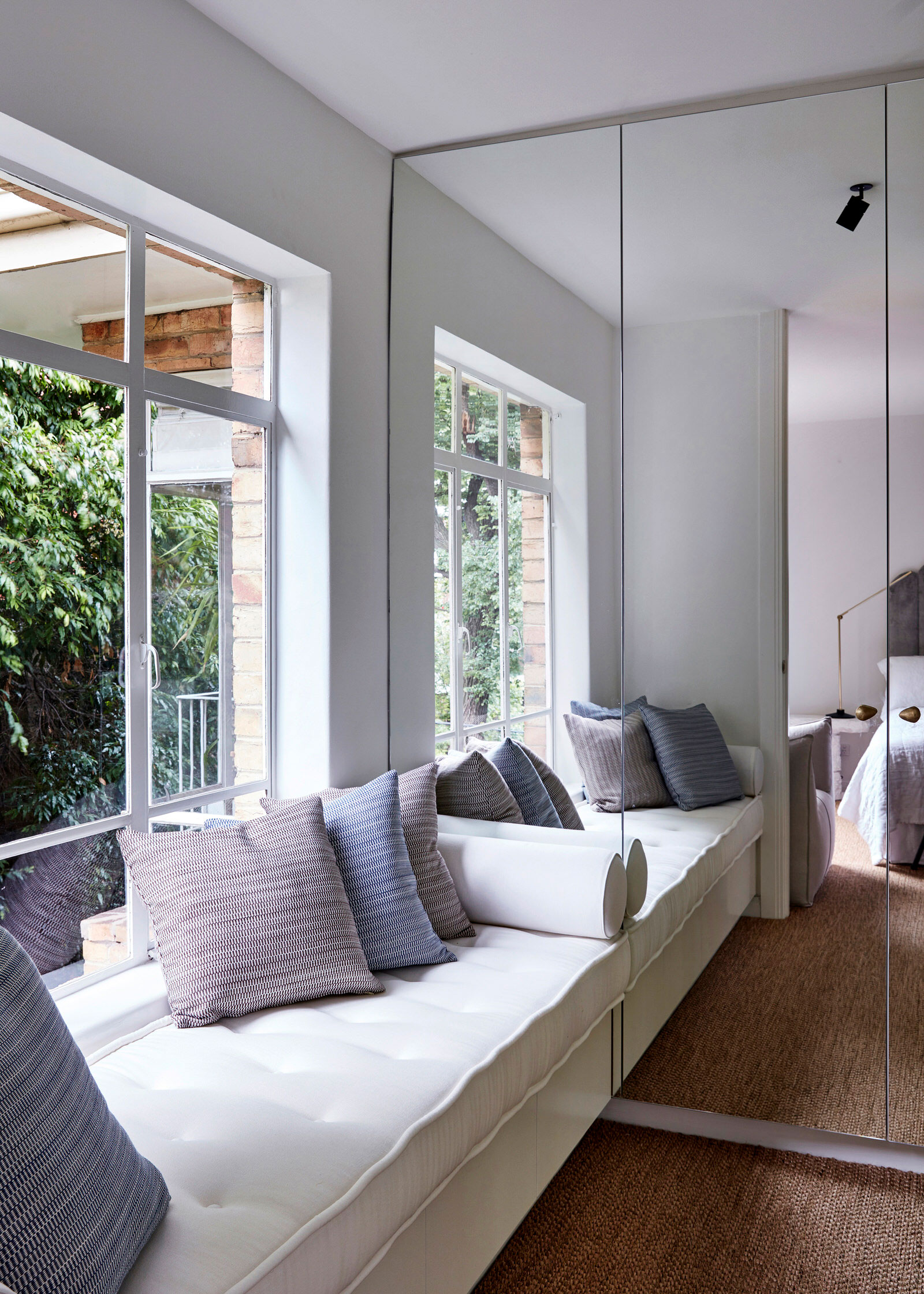 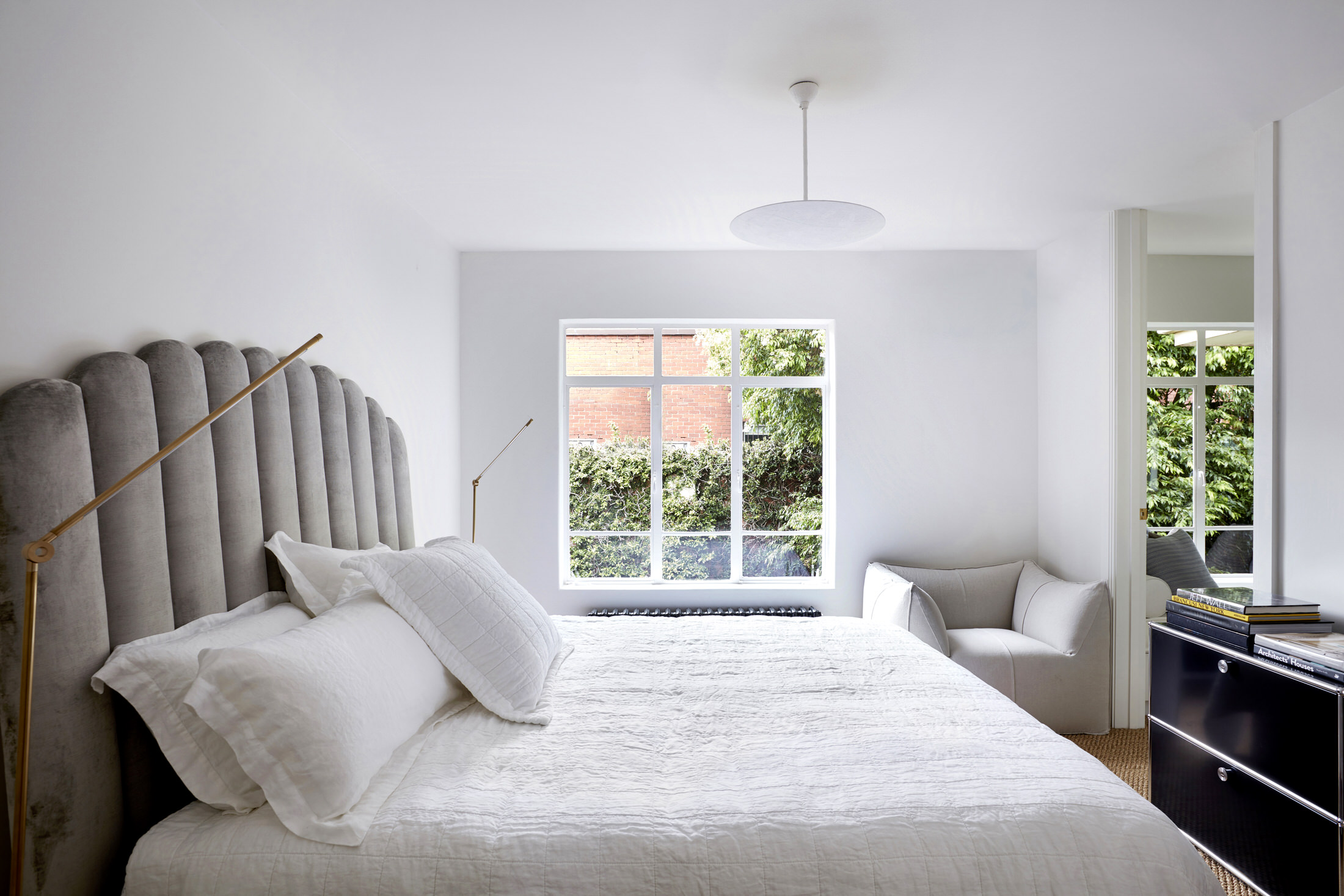 “I have always wanted to design an entirely stainless steel kitchen. I find the material beautifully understated and here it is a fitting accompaniment to the owner’s streamlined lifestyle,” says Jonson. In this kitchen, seamless planes of stainless steel envelop the countertop, rangehood, and even the floating shelves, with the pantry, fridge, and other appliances all concealed behind stainless steel doors that open via push latches. With no handles and a glamorous brushed finish, the hand-moulded joinery becomes an artwork in itself. Here, the softening elements are the parquet floor, with its warmth of tone and detail, and backsplashes in Calacatta Viola marble, its pinks, purples, and browns bringing a ripple of colour into the space. The leftover marble was to create the top of a small console table, balancing it with a blackened steel base. This sits in the new entrance space with an eclectic mix of objects arrayed on top two glass vases, a spiky Murano and a smooth Daum one, alongside a bold white marble breast sculpture and a black concrete torso, both by Kelly Wearstler. More plays on form and finish, in a place whose nuances extend far beyond the black and white.

Tamsin’s book Spaces for Living is out now, with copies available here, at all good bookstores and on Tamsin’s own website. 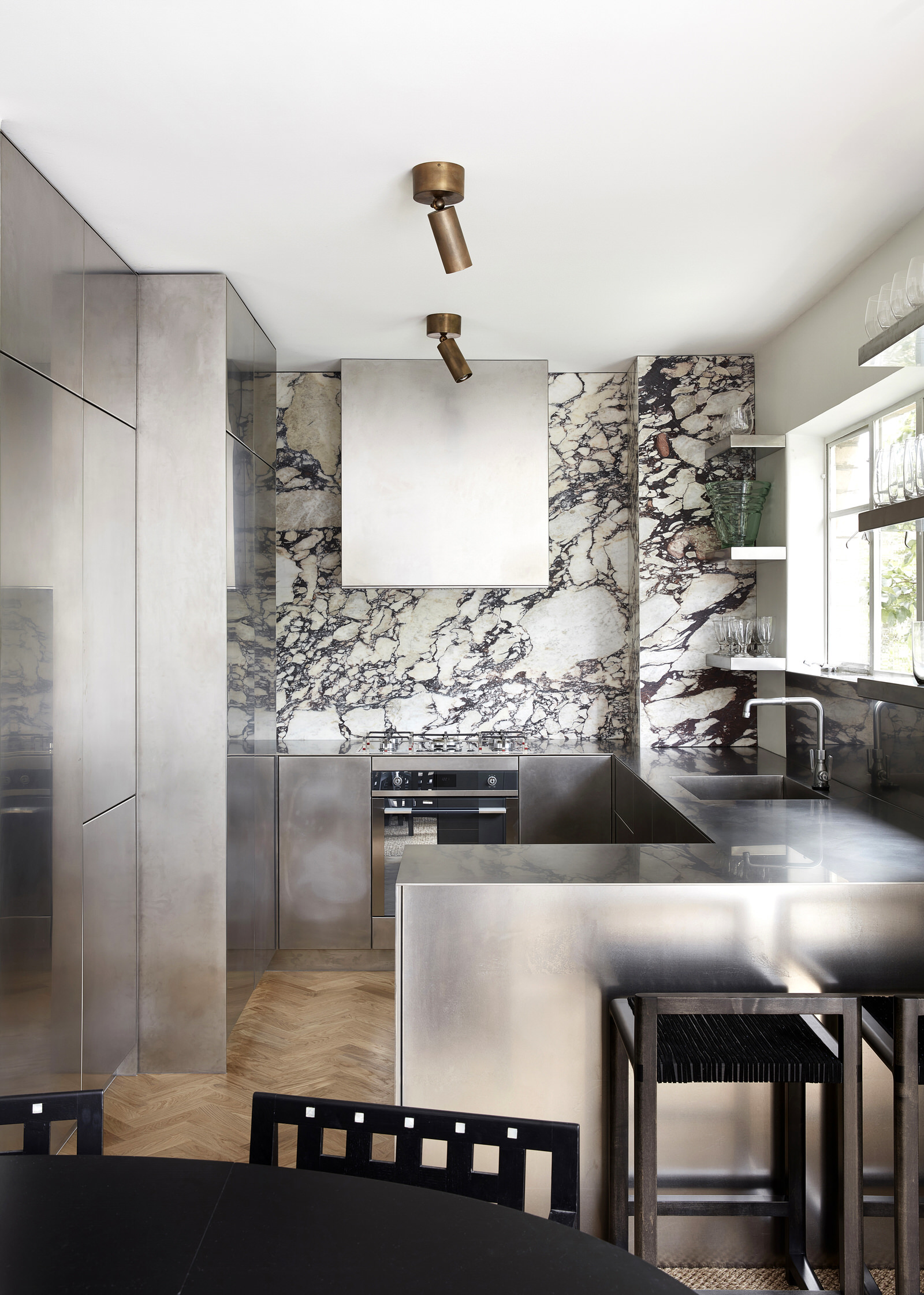