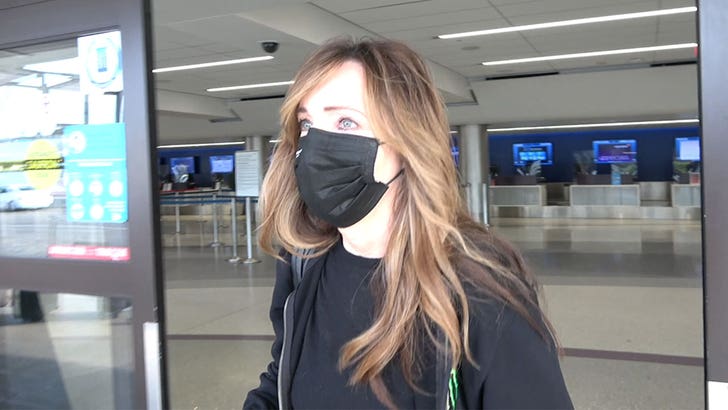 Britney Spears‘ bedroom was secretly bugged, and a former security employee claims the idea was hatched by a woman named Robin Greenhill, but Robin had no interest in answering the allegation.

Greenhill said nothing to a photog at LAX Monday, where she was asked about the claim in the latest New York Times documentary, in which Alex Vlasov claimed Robin, who was a member of Britney’s management team, came up with the idea of mirroring Britney’s iPhone to monitor her messages and calls.

Robin works for the Tri Star Sports & Entertainment Group, which denied the allegation.

Sources with direct knowledge of the conservatorship tell TMZ … Robin was the key person who managed Britney day-to-day, and often allegedly blocked Britney from spending her money, even for relatively inexpensive items.  Some people involved in Britney’s life/business say Robin had an iron grip on Britney, making onerous decisions that blocked her from vacations and various purchases.

Robin worked for Lou Taylor, who is a honcho at Tri Star whom Jamie Spears would often call “the smartest person in any room.” We’re told Jamie delegated a lot of day-to-day decisions to Taylor, who then delegated to Greenhill. We’re told Jamie wouldn’t hear criticism of the way Taylor or Greenhill were managing Britney … what they said goes.

Tri Star no longer handles Britney’s affairs, and her lawyer, Mathew Rosengart, has vowed to get to the bottom of allegations involving secret recordings and monitoring.