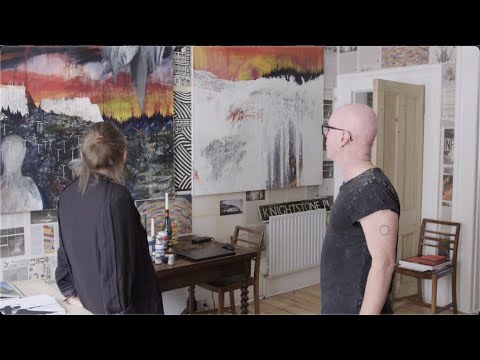 Donwood’s decades-long creative collaboration with Radiohead has been truly extraordinary — something he and the band’s frontman Thom Yorke talk about in the video above. Between 1999 and 2001, the artist created paintings in response to the albums Kid A and Amnesiac, six of which are now being offered for sale at Christie’s Stanley Donwood is the artist responsible for Radiohead’s mysterious album covers — all those strange, digitally manipulated images that speak of modern alienation. Born Dan Rickwood in 1968, Donwood first met the band’s main vocalist and songwriter, Thom Yorke, as a student at Exeter College of Art and Design in the late 1980s. He ‘looked like he was there by mistake’, recalls Yorke, remembering a fire-breathing hippy with red hair and a tweed cap. ‘I decided I didn’t trust him. Had a feeling I’d end up working with him.’ In 1994 the pair collaborated on the cover art for Radiohead’s third EP, My Iron Lung. Yorke remembers wandering around the basement of the John Radcliffe Hospital in Oxford with a video camera, looking for a tank ventilator. They found some resuscitation dummies instead, which gave rise to the image on the cover of the band’s second album, The Bends, released the following year. Learn More: https://www.christies.com/features/Meet-Radioheads-favourite-artist-Stanley-Donwood-11848-3.aspx

I Tried a $210 Eye Serum—Here’s What Happened

For the Love of God: Let Fictional Characters Go To Church and Have Sex