Billie Eilish is both apologizing for and clarifying a recent video that surfaced of the singer using an Asian slur and seemingly mocking Asian accents … saying the clip isn’t entirely as it appears.

Eilish came under fire last week after a TikTok showed her mouthing the Asian slur “c***k” as she sang along to Tyler, the Creator‘s song “Fish.” The song’s entire verse is, “Slip it in her drink and in the blink, Of an eye, I can make a white girl look c***k.”

The mashed-up video then shows Eilish speaking gibberish, which many believed to be her mocking an Asian accent.

In an apology Monday, Billie said the video was from when she was 13 or 14, “I mouthed a word from a song that at the time I didn’t know was a derogatory term used against members of the Asian community. I am appalled and embarrassed and want to barf that I ever mouthed along to that word.” 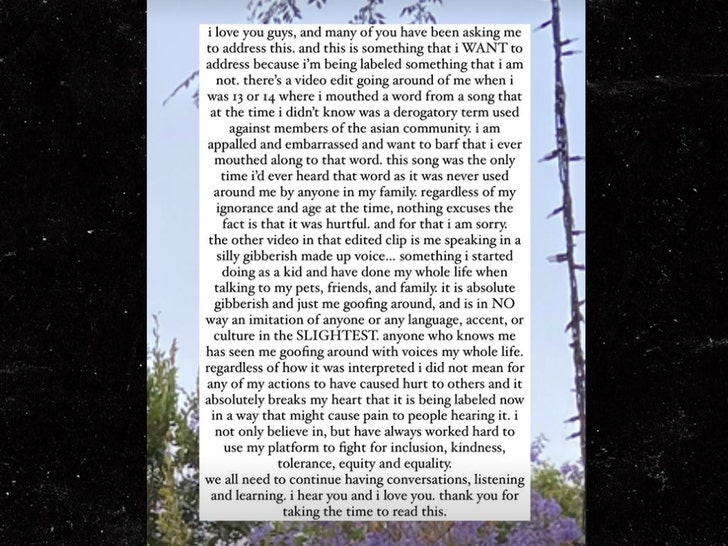 She says the song was the only time she had ever heard that word, and it was never used by a member of her family or anyone else around her.

As for the second part of the clip, Billie says she was absolutely in no way mocking Asian accents, and it was simply a language she made up — using it with pets, friends and family — she says, “Regardless of how it was interpreted, I did not mean for any of my actions to have caused hurt to others and it absolutely breaks my heart that it is being labeled now in a way that might cause pain to people hearing it.”

The Tyler, the Creator song was released in 2011 … and from what we can see, he never received serious backlash for using the slur.