The discovery of Spain’s hidden hammam 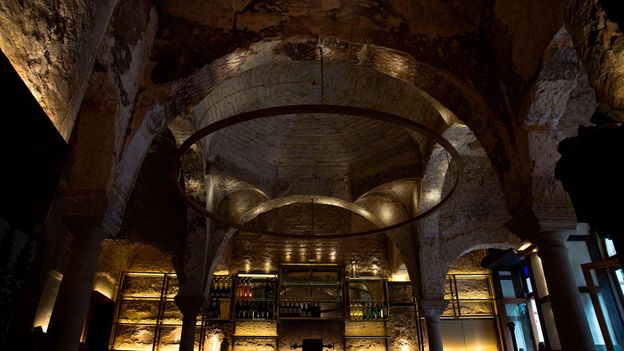 Last summer in Spain, as the coronavirus pandemic ground business to a halt at the Cervicería Giralda tapas bar in Seville’s historical centre, the owners of the 98-year-old eatery decided the time was right for some much-needed renovation. As workers began peeling back the plaster covering the bar’s soaring columns and chipping away at its vaulted ceilings, they were astonished by what they found.

Buried beneath the paint were the remains of a remarkably ornate Islamic hammam from the 12th Century, complete with skylights carved in the form of eight-pointed stars and elaborate red ochre paintings of geometric motifs representing the night sky.

This former Arab bathhouse dates from the days when the southern Spanish city was ruled by the Almohad caliphate, a Berber Empire that once reigned over much of North Africa and the Iberian Peninsula. Its discovery helps paint a better picture of urban Islamic life in 12th-Century Seville, and is the latest of several former bathhouses that have been identified around the city’s central Mudéjar-style mosque, the Royal Alcázar palace.

Historians believe these bathhouses were used by devotees to cleanse themselves before entering the mosque to pray. They also likely served as gathering places to socialise, talk business or just relax. Perhaps it’s fitting, then, that instead of being turned into a museum, this hammam-turned-tapas bar is still a place to meet, chat and let your cares wash away.

Never Have I Ever Season 2: Everything We Know

The $350 million carbon fiber superyacht concept with its own port

The couple who met on the beach at Boracay