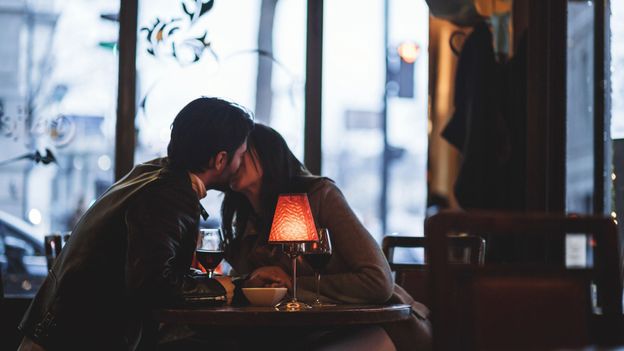 My French husband loves me. I know he loves me because he hands me a bouquet of flowers almost every weekend. And when I tell him I was at a party full of beautiful people, he charmingly says something about “birds of a feather”. I’m reminded that he loves me when we’re at a cocktail party with work colleagues and he reaches out to caress my arm. He calls me ma biche (my deer) and shows his love for me every day, even after more than a decade together.

Without being able to say “love”, the French have learned to show it instead

However, I can’t remember the last time he said “je t’aime” (I love you). This might be disconcerting if it wasn’t so normal in France, where no matter how head-over-heels a couple may be, they rarely utter those words.

It’s not about a lack of affection or the fear of commitment. As Lily Heise, a Canadian freelance writer and romance expert living in Paris, observed, commitment seems to come easy to the French. “After three dates, that’s it; they’re not seeing anyone else and they expect to be together all day, every day, except when work gets in the way,” she said.

Heise was inspired to write her first book, Je T’aime, Me Neither, when her French boyfriend left her saying, “Je ne t’aime plus.” The proclamation was all the more startling, she said, because how could he say, “I don’t love you anymore” when he had never said, “I love you”?

The French don’t say, “I love you” because they don’t have a verb to express heartfelt sentiments for the people they care about. There is only the verb “aimer”, which means both “to like” and “to love”. As a result, a French person is not exaggerating when they conjugate “aimer” to explain their relationship to rugby, a warm baguette or the smell of lilacs. Naturally, then, it feels trite and rather mundane to use the same word when describing intense feelings of love for one’s newborn baby, a childhood friend or a life partner.

Looking at Larousse’s online French-English dictionary helps understand how the French do talk about love. Here, the transitive verb is defined as “aimer”, but the examples listed of how to express that love show how rarely it is used. According to Larousse, when talking about love for a sport or a food, the proper French term would be passion. Love at first sight is a coup de foudre (lightning strike); letters are signed affectueusement (affectionately); and the love of your life is simply the homme ou femme de ma vie (man or woman of my life).

Without being able to say “love”, the French have learned to show it instead. “Flattery”, “chivalry” and “romantic” are all words that found their way into the English language through Old French. Giving compliments is something of an art form here, coming just as easily from a new lover as the butcher preparing your leg of lamb. Men don’t think twice about carrying a woman’s suitcase down the metro stairs, and, as for being romantic, it’s ingrained in a culture that perfected chocolate, invented Champagne and built the opulent Art Nouveau Pont Alexandre III bridge.

It’s not just about romance, either. Marie Houzelle, French author of the novel Tita, who writes exclusively in English, says French parents may say “je t’aime” to their children but they are more likely to call them ma puce (my flea), mon chou (my cabbage) or ma mignonne (my cutie) – all common pet names in France. According to psychoanalyst Robert Neuburger in the French edition of Slate magazine, “Like a greeting, or a kiss, pet names are part of the intimacy of a couple, a ritual that distinguishes the person you’re addressing from everyone else, and that’s what makes it precious.”

You may also be interested in:
• Why the French love to say no
• Is this the most perfect love story?
• The nation that loves complaining

In France, pet names are specific to the individual or their role in your life. A man may refer to his female colleauges as mes chats (my cats). A close friend greeting a woman is likely to call her ma belle, or my beauty. An online search of women’s magazines produces lists of hundreds of pet names for mum, dad, the kids, a friend or a lover: ma chéri; mon coeur (my heart); mon trésor (my treasure); ma perle (my pearl).

The French don’t have to say it, either. They are happy to communicate their feelings with hugs, cuddles and kisses wherever and whenever they feel the need to express love. There is no debate about public displays of affection in France, where PDAs are celebrated as a fortunate consequence of love. A Paris summer is full of couples sitting hip to hip along the Seine, kissing so passionately that they don’t notice the encouraging cheers of tourists on the passing Bateaux Mouches river boats.

Parigramme Press has published a guidebook on the best places to kiss in Paris, Où s’embrasser à Paris. ELLE Magazine suggests the Medici Fountain in the Luxembourg Gardens or a bench in the tiny Square Jehan-Rictus at Montmartre, facing a wall where “je t’aime” is written in every language. My Little Paris, a popular website for locals, recommends a make-out session at the Montparnasse Cemetery, near Brancusi’s sculpture of The Kiss.

Kisses also replace “I love you” when saying good-bye to friends and family. The French say “je t’embrasse” (I kiss you) at the end of phone calls with loved ones. My children end their text messages to me with bises (kisses), while my good friends sign off with a slightly more formal bisous, both describing a kiss that comes from the Latin word baesium, a salute that falls between a sacred rite and a romantic gesture.

A bise is not just for saying good-bye, either. It’s part of the French greeting ritual. In Paris, the bise is a simple peck on each cheek. In parts of the south, people greet each other with three pecks, while in the north-west, four pecks can be the norm. The bise is for family, friends, friends of friends and sometimes even co-workers.

This ritual, like the American hug or the Rwandan handshake that involves both hands, came into question during the pandemic, which inspired the French to test socially distanced alternatives. French President Emmanuel Macron likes the fist bump, but that puts people a little too close for comfort. The foot shake made famous by late Tanzanian president John Magufuli is a threat to the high heels and highly polished shoes the French cherish. The elbow bump became the easiest to integrate, but bonjours still feel awkward and au revoirs incomplete without a bise.

In May 2021, France finally relaxed Covid restrictions: the curfew was rolled back to 21:00 and restaurants can now serve food outdoors. The French celebrated and were seen greeting each other – sometimes masked, sometimes not – with the bise in front of Parisian cafes, at chalets in the Alps and in beach shacks on the French Riviera. Vaccinated adults are once again exchanging bises at weddings, baptisms and b’nai mitzvot, and everyone suspects it’s just a matter of months before the bise is back in full. Because in a country where it’s not easy to say it, everyone is anxious to get back to showing their love.

Why We Are What We Are is a BBC Travel series examining the characteristics of a country and investigating whether they are true.

25 Delicious Keto Sides to Round Out a Low-Carb Meal

40 Delicious BBQ Salads to We Can’t Wait to Eat