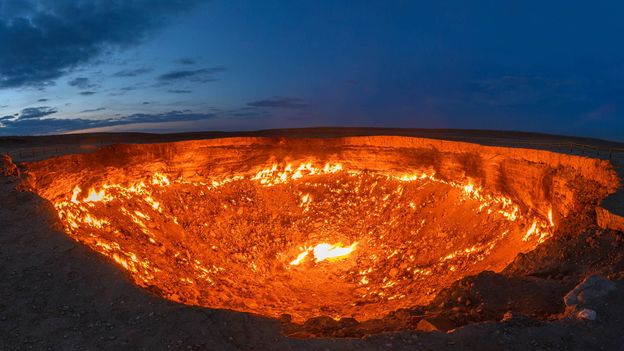 The Karakum Desert is a massive expanse of sun-scorched sand dunes covering roughly 70% of Turkmenistan. You could wander through this parched 350,000sq km badlands for days and only see the endless crests and valleys of the Karakum’s barren wilderness. But if you make your way to the desert’s north-central plain, you may stumble upon a truly surreal site: the Darvaza Crater, a molten gas pit that has been spewing fire for decades and is known as “The Gates of Hell”.

The story goes that in 1971 Soviet geologists were drilling for oil in the desert when they hit a pocket of natural gas. This caused the earth to collapse, forming three large sinkholes. In order to prevent the methane from leaking into the atmosphere, it’s rumoured that geologists lit one of them on fire, thinking it would burn out in a matter of weeks.

But after Canadian explorer George Kourounis set off on the first expedition to plumb the crater’s depths in 2013, he discovered that no-one actually knows how this hellish inferno came to be. According to local Turkmen geologists, the gaping 69m-wide-by-30m-deep crater formed in the 1960s and wasn’t lit until the 1980s. Yet, because gas and oil were highly prized commodities in Turkmenistan during Soviet rule, it appears any record of the crater’s creation is now classified and top-secret information.

What is certain is that this unlikely methane-belching fire pit has become one of the most popular tourist attractions in a country that only sees about 6,000 visitors per year. For much of the past decade, as the sun dips below the Karakum’s sea of sand dunes, wide-eyed wanderers from near and far have come to witness this blazing colosseum of fire light up the desert sky.

This video is part of BBC Reel’s Classified playlist.

Fear and Longing: Online Dating As an Asian Woman Got Even Worse After Atlanta