The Indian food sold for a pittance 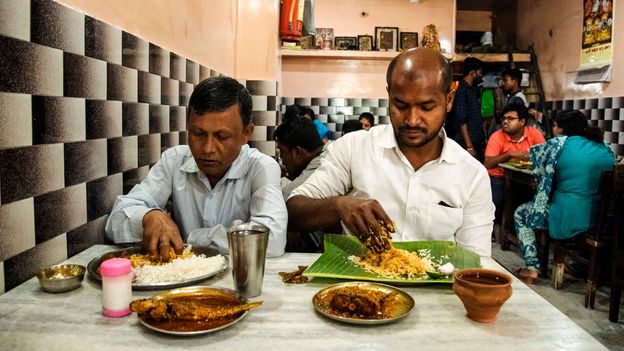 It’s easy to miss the narrow entry to Hotel Sidheshwari Ashram, tucked in the alley behind Kolkata’s St Hogg’s market, but it’s the fragrant whiff of fish seared in mustard oil that directs customers to the door. It’s rush hour and the restaurant, one of Kolkata’s few remaining pice hotels, is packed to the gills: waiters in bright orange livery dart in and out of the kitchen; bowlfuls of vegetables, fish and meat preparations accompany mounds of rice laid out on banana leaf plates. An accountant perched between the staircase and the dining room keeps score of every serve. The seats lining the marble-top tables fill up in quick succession as hungry office workers break for lunch.

Rita Sen, the fourth-generation owner of this pice hotel, rushes to manage the floor. “We’ve been running the place for the last 93 years, and our stream of customers has not ceased. Even the former Mayor of Kolkata used to get his lunch from our hotel,” she said.

Pice hotels derive their name from the Hindi word “paisa” – the lowest denomination of the Indian rupee. Named for their ability to provide wholesome, home-like meals for cheap, scores of pice hotels littered Kolkata’s cityscape in the early 1900s when the city was a bustling metropolis, swarming with migrants who came here to work. These workers were mostly middle-class single men who did not know how to cook and missed the comforts of their family kitchens. Pice hotels offered both familiarity and nourishment to these homesick young men.

Pice hotels are unique in their service; meals would be served on banana leaf plates to customers seated on mats on the floor. The recipes were strictly traditional, and often included dishes such as alu posto with poppy seed paste, kumro phool bhaja made from pumpkin blossoms, and the mildly spiced prawn chingri macher malai curry in coconut milk. The price and menu would change daily, depending on what was available in the market that morning. To keep the overhead costs low and to avoid waste, everything down to the last lemon sliver (and including the banana leaf) was priced individually.

Although tables and chairs have now replaced the floor mats, the service at these pice hotels has not changed. Visitors still get to revel in the customary experience of eating on banana leaf plates, and a regular three-course meal is still cheap at about Rs 200 (a little more than ₤2). Even today, everyone from Indian workers to international tourists can step into these traditional eateries that follow age-old rules and recipes to savour what is arguably the most authentic Bengali cuisine in Kolkata.

“There is a lot of urban romanticism attached to pice hotels now, but for close to a century, their place in Kolkata’s gastronomic universe has been to provide balanced meals at a low cost to a lower income population,” said food historian Tanushree Bhowmik. Coffee houses catering to British residents were the first retail eateries in India. But pice hotels stand out as “the first commercial indigenous eating places in the city”, Bhowmik added. “People moved from rural to urban areas as the economy shifted from agrarian to industrial, and these hotels sprung up to meet its needs.”

Many pice hotels started as the kitchens of messbaris, cheap boarding houses for students and office workers. Sandeep Dutta, who inherited Hotel Mahal from his grandfather, Nandalal Dutta, spoke of his pice hotel’s beginnings as a part of the famed Presidency Boarding House on North Kolkata’s Ramnath Majumdar Street. “In 1917 my grandfather started this boarding house for students who came to study in the premier institutions nearby,” he said. “When the boarding house eventually shut down, I turned the kitchen into a restaurant.”

Hotel Sidheshwari Ashram, too, started as a messbari for workers who came from nearby towns and rural areas in the early 1900s. “By 1936, my father decided to open its doors to outsiders as well to increase his business during lunch hours,” said Sen. “When we set the menu, we decided to include options for office-goers who were looking for something not too heavy. Kobhiraji jhol – our speciality – is a light fish curry with a medley of vegetables. In summer, we serve aam shol machch, a tangy mango and mustard curry fish that is low on spices.”

Pice hotels are known for the astounding range of dishes that they serve for both lunch and dinner. Hidden in a quaint corner of South Kolkata’s Rashbehari junction is the 106-year-old Tarun Niketan Hotel, which serves 15 different fish dishes daily, including bhetki paturi, marinated fish fillets steamed in banana leaves; chitol kosha, a spicy clown knife fish curry; and the famous Bengali delicacy iIlish macher jhol, hilsa fish cooked in a mellow mustard gravy. Arun Dev, who has been running the establishment for the last 42 years, says the fish-egg fritters are particularly popular.

Eating at a pice hotel is different than most Kolkata dining experiences. A list of items and their prices for the day are neatly written on a blackboard at the entrance of each hotel – and the waiters can rattle off the whole list from memory. Tables are usually shared but each seat has a separate bill. Most hotels only accept cash.

Bengali meals are an elaborate affair with at least seven dishes. “Food here is eaten in courses – you are first served rice with shukto, which is a bitter vegetable curry. Then come the leafy greens. Next in line is a lentil curry to which you can add extras like fritters and a simple vegetable. This is followed by fish and then meat and finally a sweet chutney to cleanse the palette and bring you to your dessert,” Bhowmik said. According to her, the courses move from lighter to heavier curries, from smaller to bigger fish preparations, and from bitter to sweet tastes. For a visitor, these choices may seem daunting but a little help from the waiters goes a long way toward finding the right combination. “Pice menus give you the flexibility to keep adding dishes depending on your own tastes, while keeping the cost pocket-friendly,” Bhowmik noted.

During the Indian Independence Movement in the 1940s, pice hotels offered more than just cheap sustenance. Gautam Basu, a history enthusiast and regular at the Young Bengal Hotel in Kolkata’s Kidderpore area, spoke of how these hotels contributed to the freedom cause by offering cheap or free meals to freedom fighters during this time. A stone’s throw away from the busy College Street junction, Swadhin Bharat Hindu Hotel, originally known as the Hindu Hotel, was both a hideout and a venue for clandestine meetings.

“The hotel upfront was a ruse. The inside room had a back exit that led to a secret passageway outside,” said Vivek Kumar Singh, who now runs his grandfather’s establishment. Stalwarts of the movement, including Netaji Subhas Chandra Bose, were regular visitors.

Some owners even named their hotels to show their political leanings. After independence, Singh’s grandfather MN Panda added “Swadhin Bharat”, or “Free India”, to the hotel’s name. And Tarapada Guha named his hotel Young Bengal Hotel after a radical Bengali free-thinkers movement that contributed to social reform.

Though steeped in history, most pice hotels have been unable to keep up with rising food prices and the changing demands of the modern city. Many have closed, and with them has gone an important part of Kolkata’s food history. Guha once ran three pice hotels in the city – only the Young Bengal Hotel has survived. Pritha Ray Bardhan, Guha’s granddaughter, told me of the challenges that come with keeping the place running at a time when food and overheads costs are soaring. “We have had to increase our prices to make sure that the quality of our food is not compromised, and we can stay afloat,” she said.

For Sen, who runs Hotel Sidheshwari Ashram with her sister-in-law Debjani, the road has not been easy either. “The office crowd has thinned down over the years as several government offices have been shifted to the outskirts of the city… We once had twice the number of customers – things are different now,” she said. While some have tried to move to digital food delivery platforms, especially during the pandemic months, often the commissions charged by such services are not cost-effective.

Despite the hiccups, most of the remaining pice hotel owners remain resolute. Sen still hopes that both her daughter and her niece will continue this matrilineal inheritance. And Singh at Swadhin Bharat Hindu Hotel explained, with a mix of determination and sorrow, “Even if we run at a loss, we wish to carry on the legacy of my grandfather. Some things are invaluable.”

How I Took Down Bill Cosby