A UK isle where the pub never shuts 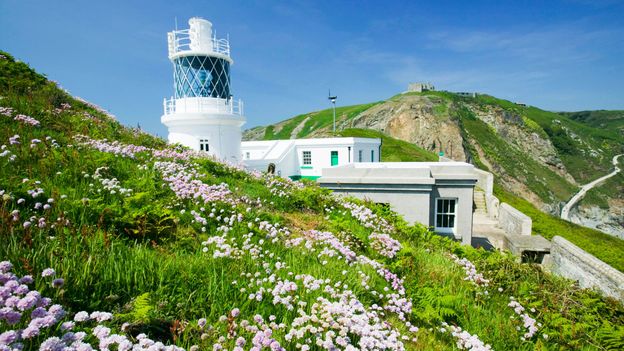 Just three miles long and half a mile wide, and with puffins outnumbering people 15 to one, the island of Lundy seems an unassuming place. This tiny sliver of England, however, lying just north of Devon in the Bristol Channel, has endured a long and volatile history that belies its modern-day incarnation as a protected nature reserve, bird-watchers’ paradise, and, for the 26 people who live here, idyllic island home.

Lundy’s past is peopled with crazed pirates, renegade knights and crooked MPs, while several of the island’s former custodians have attempted to establish it as an independent kingdom with its own laws and currency; all expressions of a rich seam of great British eccentricity that remains in evidence on Lundy today.

“The beauty of Lundy is that it hasn’t changed for many, many years; it’s like stepping back to the 1950s,” explained Derek Green, the island’s general manager. “There are very few vehicles, no pollution, no noise, lots of wildlife. It’s a place that is untouched by the modern world.”

I was talking to Green aboard Lundy’s supply ship, the MS Oldenburg, as it departed the Devon harbour town of Ilfracombe on an ice-blue April morning. The Oldenburg itself is something of a throwback; built in 1958, it wears its heritage elegantly in its polished wood and brass-fitted saloons. In addition to ferrying provisions for Lundy’s shop and pub, it carries hundreds of passengers to the island every week. Tourists are drawn by Lundy’s spectacular coastal landscapes and its sense of serene otherness from the mainland, and by its wildlife, long recognised as a characteristic feature of the island.

You may also be interested in:
• Britain’s lawless ‘fourth’ country
• The nation being swallowed by the sea
• The least British of the British Isles?

“The name Lundy means ‘puffin island’ in Old Norse,” Green said, explaining that this is a legacy of the Viking raiders who used Lundy as a base of operations from the 8th Century AD, though they were far from the first inhabitants. “Lundy’s history is long and colourful,” he said. “There’s evidence of Bronze Age occupation in the remains of hut circles in the north, there’s a 13th-Century castle and there’s a long history of shipwrecks. There are three lighthouses; that’s unique for such a small island.”

We disembarked on Lundy’s south coast in the shadow of one of the three. As I traipsed up the steep, rock-cut path to the top of the island, the scent of coconut wafted over the cliffs from prickly bushes of gorse, which crackle year-round into a riot of yellow flowers. Civilisation on Lundy amounts to a collection of historical stone buildings in the south of the island known simply as the village, home to staff and visitor accommodation, a pub, a shop and a 19th-Century Anglican church. A handful of other characterful buildings are scattered across the rest of the island, including the old castle, a former naval signal station and the ruins of a Victorian quarry, but for the most part it is a wilderness, with grassy meadows in the south and rugged moorland in the north. The cliffs on the east coast are green, gentle and peppered with wildflowers, while those on the west – the domain of the seabirds – are sheer and spectacularly rugged.

Once in the village, I made for the well-stocked Lundy General Stores. For sale were Lundy stamps bearing the image of the island’s famous seabirds – a legacy of Lundy’s last private owner, Martin Coles Harman, who ran afoul of the mainland authorities in 1931 after declaring himself King of Lundy and minting his own currency, the Puffin.

Sue Waterfield, who manages the shop, moved to Lundy six years ago after 30 years living in Cornwall. “Living here is less stressful, away from the pressure to be busy all the time,” she said. “Being surrounded by the sea and at the mercy of the elements makes you feel closer to nature, and the light here is phenomenal. You can easily be shaken out of a bad mood just with a short walk from your front door.”

Perhaps somebody should’ve told Lundy’s medieval inhabitants to go for more walks, for during this period events on the island became distinctly bad-tempered. In 1155, the new King Henry II handed the island to the Knights Templar, although, true to form, their association with Lundy is shrouded in mystery and it’s unclear whether they ever took possession of the island. Regardless, the king’s decree added fuel to the anti-English fire of the island’s stewards, the Marisco family, whose allegiances lay with the French and Scots. “The Marisco family used Lundy as a base for piracy before William de Marisco was implicated in an attempt to murder King Henry III [in 1238],” explained Michael Williams, Honorary Secretary of the Lundy Field Society. “The King sent his men to Lundy and William was captured, found guilty of treason and hung, drawn and quartered.”

In the centuries that followed, Lundy became a wild and lawless place. Its sheltered bay and strategic position in the shipping channel between England and Wales drew in a ragtag succession of pirate bands. A company of Barbary pirates, the Salé Rovers, flew the Ottoman flag over Lundy for five years from 1627, capturing Europeans who would then be sent to Algiers to be sold as slaves.

By the mid-1700s, Lundy was in ostensibly more legitimate hands, but goings-on remained just as unseemly. “In 1750, Lundy was leased to Thomas Benson, a shipping merchant and MP for Barnstaple, who concealed smuggled goods on the island,” Williams explained. “He was also contracted to transport convicts to America, but instead he landed some of them on Lundy where they were used as a slave work force.” Benson’s Cave, where he stored smuggled pewter and linen, sits on a southern cliff.

The beauty of Lundy is that it hasn’t changed for many, many years; it’s like stepping back to the 1950s

Lundy’s parade of eccentric owners continued undimmed. Sir Vere Hunt, an Anglo-Irish aristocrat and acutely terrible businessman, acquired Lundy in 1802 and established an Irish colony on the island. Populated with workers from his estate in Curragh, County Kildare, it had its own coinage, stamps, taxation and divorce laws. Then followed the ownership of William Hudson Heaven, whose family built the island’s church. The “Kingdom of Heaven” was far from angelic, however – it was paid for with compensation received after the emancipation of slaves from the family’s sugar plantations in Jamaica.

It wasn’t until 1925, with the coming of the Harman family, that Lundy began to become the place it is today: “A haven of peace and natural beauty,” as Martin Coles Harman described it in his mission statement for the island. He was a passionate naturalist and introduced many of the unusual species that now call Lundy home; Japanese sika deer, Soay sheep from Scotland, Highland cows and feral goats with vast, scimitar-like horns roam the island at will.

“The island’s topography and habitats are really quite special,” said Lundy’s warden, Dean Woodfin Jones. “Thousands of seabirds come here in the summer to breed: puffins, guillemots, Manx shearwaters, storm petrels. There’s also a really important Atlantic grey seal colony.” The flora, too, includes many rare species, including the endemic Lundy cabbage, which grows nowhere else. Being a protected species, you can’t eat it – not that you’d want to. “Triple-distilled Brussels sprouts” is the anecdotal verdict.

I was talking to Woodfin Jones in the beer garden of the Marisco Tavern, the lively hub of Lundy life where flotsam from shipwrecks decorates the walls and the menu features Soay burgers and sika venison. As the only building on the island with electricity after the generators shut down for the night, the Tavern never closes its doors; campers can take shelter from the rain, and people are always welcome to use the payphone. (Phone signal on Lundy is very hard to come by, plus use of personal devices in the pub is punished with a “swear jar”-style £1 fine.)

I was struck by the vibrancy of the community, and by how many young people have chosen to live on this remote island. Woodfin Jones is 33 and has lived on Lundy for four years. “I don’t miss an awful lot from the mainland, to be honest,” he said. “We have such a vibrant social community here.” Alice Waterfield, 29, who works at the tavern, agreed. “We all get on really well; if it’s a nice day we can go down to the beach, or we go scrambling around the island. People come here because it’s a bit of an adventure.”

History suggests that flux is the only constant on Lundy. The island’s future looked in peril when tourist income fell off a cliff during the coronavirus pandemic. Thanks to a mixture of donations and government grants, though, Lundy’s future is now secure and the islanders can resume their work conserving its precious wildlife and timeless atmosphere.

“My task is to keep Lundy as a world apart, and to try and keep the 21st Century from knocking on our door,” Green told me.

On the current evidence, he’s doing a good job.

Hidden Britain is a BBC Travel series that uncovers the most wonderful and curious of what Britain has to offer, by exploring quirky customs, feasting on unusual foods and unearthing mysteries from the past and present.

Is this Europe’s most inclusive city?

An ancient bath found in a bar

The discovery of Spain’s hidden hammam

The birthplace of a new ocean

Focus: Travel and the new normal