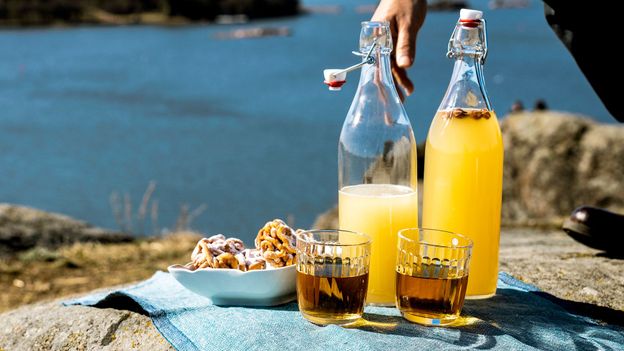 Finland is known for its triple “s” – sisu (resilience), sauna and Sibelius. But for centuries, there has also been a fourth, more subtle “s”: sima, a fermented drink made with water, sugar, lemon and yeast. Today, effervescent and virtually non-alcoholic sima is beloved across the nation, most often consumed by children and adults alike as a special drink to celebrate Vappu, or May Day, a time when Finns flood the outdoors to embrace the coming of spring.

I had my first taste of homemade sima, its soft bubbles sparkling in the spring sunshine, 35 years ago in my friend’s garden in the Finnish city of Pieksämäki. It was the eve of Vappu, and the drink’s sweet acidity left a memory in my brain that has stayed with me to this day. As it also happened to be my fourth birthday, it took some time for me to realise that the celebratory refreshment had nothing to do with my special day, but instead was part of a rich piece of Finnish history that stretches back centuries.

Sima’s roots stem from the ancient alcoholic drink mead, or honey wine, which was widely drunk in early Bronze Age Europe. Mead, which in its simplest form is fermented honey and water, wasn’t specific to Europe – it’s also mentioned, for example, in India’s Rigveda, an ancient collection of Vedic Sanskrit hymns. But, perhaps due to TV series such as Game of Thrones and The Vikings, mead’s modern-day fame lies on the shoulders of 8th-Century Vikings, who enjoyed a highly alcoholic mix of water, honey and herbs such as meadowsweet and harrow. For them, mead was a drink from the gods that gave people strength to win battles. In fact, Vikings held mead in such a high regard that aspiring chieftains would build their own mead drinking halls to gain their followers’ respect.

Nevertheless, the citrusy mead that more closely resembles today’s sima didn’t dock on Finnish shores such as those of the seaside city of Turku until the 16th Century, imported from the Hanseatic Northern European towns in what is modern-day Germany and Latvia. This 16th-Century drink – which, contrary to today’s low-alcohol sima, contained up to 17% alcohol due to a longer fermentation process – was a more desired drink in Finland than beer.

One of the busiest 16th-Century Finnish importers was savvy merchant and shipowner Valpuri Erkintytär Innamaa, a strong-willed woman who helped make sima the iconic Finnish Vappu beverage it is today.

In Innamaa’s day, Turku was still part of Sweden. When Gustav I was crowned king in 1523, he recognised the city’s strategic importance, renovated its dilapidated castle and occasionally visited. While in town, he enjoyed Turku’s sima, making it a fashionable drink among the bourgeois. According to Seija Irmeli Kulmala, author of the recipe book Sima – a festive drink made with nature’s ingredients, “King Gustav I of Sweden loved the sima he tasted in Turku. He created a sima boom,” she said. “Sima was imported [from Riga and Lubeck] in vast quantities and its popularity grew.”

Innamaa’s first husband had received a royal warrant of appointment from the Swedish court residing at Turku Castle to provide goods he had imported. When he died in 1563, Innamaa took over the merchant business, becoming the wealthiest Turku merchant with the city’s biggest fleet of ships. Spurred by the craze for sima that Gustav I had created in Turku, Innamaa started importing more of the increasingly popular drink from Baltic ports, spreading it at least as far as Stockholm. In the Swedish capital at the time, sima was nearly as expensive as wine.

Innamaa’s success in business was remarkable, as traditionally her late husband’s inheritance would have been transferred to her new spouse. Instead, she took control of the business herself – even after marrying three more times. Her success made her an easy target during the 1560s political turmoil that followed Gustav I’s death, and she was attacked and looted more than once. Yet, according to Kristiina Vuori, author of the historical novel Western Winds based on Innamaa’s life, Innamaa wasn’t afraid of enemies. “She even travelled to Stockholm to tell the king himself about the injustices she suffered,” Vuori said. “Despite being a woman, [Innamaa] wouldn’t be silenced.”

You may also be interested in:
• How the Finnish survive without small talk
• The Swedish chef who cooks solely with fire
• Norway’s far-flung isle with a Viking spirit

It took more than two centuries for sima to drip from high society’s goblets to working-class glasses in Finnish homes. In Innamaa’s day, sima remained an expensive upper-class beverage because both of the drink’s main ingredients, honey and lemon, were still a rarity in the region. “Because of honey, sima was very expensive and only the richest bourgeois and Turku Castle’s court could afford it,” said Vuori.

By the 18th Century sugar had replaced honey, but was a rare commodity as well, dependent on imported sugarcane until Europe began producing sugar from beets. Once Finland’s first sugar refinery was established in Turku in the 1750s, increasing numbers of Finns were able to make and afford sweet luxuries like sima. During this time, working class people could get a taste of sima at special events like the local vicarage’s springtime gatherings. Decades later, that changed, and people could enjoy it more often, “when sima’s ingredients – sugar and lemon – became more readily available in the 19th Century,” said Kulmala.

In the 1880s, Finland also began commercially producing yeast, making sima even easier to make on a large scale. Local companies could suddenly produce the drink with more consistency, and it was sold in kiosks and cafes across Finland. By the early 20th Century, sima, now virtually non-alcoholic, became the go-to beverage of Vappu, the festival to celebrate spring’s arrival.

According to Tiina Kiiskinen, curator at Helsinki’s Hotel and Restaurant Museum, the connection to Vappu came about thanks to the Finnish Temperance Movement, which first gained popularity at the end of the 19th Century and swelled to become an ideological social crusade that resulted in a full ban of alcohol between 1919 and 1932. “Around the turn of the 20th Century, there was a strong will to find a non-alcoholic alternative to drink at the celebrations,” Kiiskinen said. “Sima was popular because it was cheap and resembled sparkling wine. Advertising further solidified sima’s status as a May Day drink.”

More than 100 years on, the temperance movement has lost momentum but sima remains a quintessential part of Finnish Vappu. The annual celebrations stretch from 30 April to 1 or 2 May, during which market squares fill with stalls selling food and balloons, people dress up in quirky costumes like colourful wigs and fake red noses, and young and old alike gather to sip sima and enjoy a spring day out with friends.

The reach of sima also extends beyond the festivities. Young students learn to ferment sima in schools; restaurants offer sima on their Vappu menus alongside herring, potato salad and sweet pastries; and big breweries bottle and sell their own versions of the drink. Each spring, shop shelves fill with varieties of sima, and newspapers review the best brands. Furthermore, artisanal food culture has turned homemade sima into a trend, with creative home brewers experimenting with new flavours ranging from spruce to cucumber to rhubarb.

I, too, have dabbled in making my own. Following Kulmala’s sima recipe from her book, I added pineapple and orange to the traditional lemon rind and juice, mixed everything together with sugar, then poured over near-boiling water, adding a pinch of yeast when the water had cooled down a little. After waiting eight hours, I strained the sima into bottles and topped each with a few raisins. Once a day for almost a week, I opened the bottles to let the pressure escape, and, once the raisins rose to the surface, I knew the fermentation process was complete.

This spring, while tracing the path of sima from Viking drink to a Finnish spring tipple, I ventured to Turku with a bottle of my homemade sima. In the Turku castle’s cobblestone courtyard, I imagined being back in Innamaa’s days, when barrels of sima would be hauled into the castle and enjoyed by the court. I popped the cork, my fingers getting sticky as the lightly pressured drink fizzed onto my hands. A lemon scent surrounded me and pulled me back to childhood. I took the year’s first sip of sima, let the citric sweetness roll on my tongue and made a toast to the rich history of Finland.

A reminder of the Srebrenica genocide

How a bean came to define Brazil