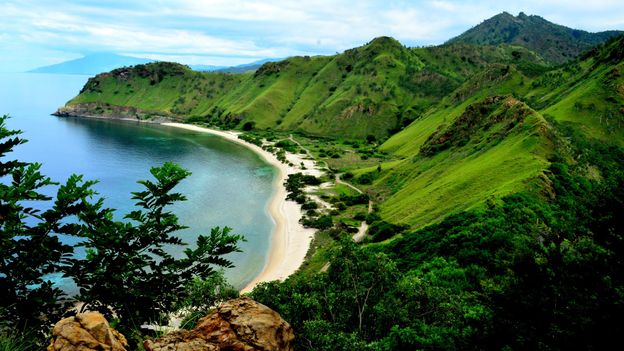 Estevao Marques was barefoot, kitted out in a salt-stained football shirt with a well-worn mask and snorkel pushed high on his forehead. A sharp-looking knife was in one hand and speargun in the other. Marques encouraged me to snap a photo before he dashed off to the beach while there was a break in the monsoon clouds above.

Marques’ local fishing ground has one of the highest concentrations of reef fish species ever recorded in a marine ecosystem, but this isn’t one of the world’s best-known diving destinations (although it should be). This is Atauro Island, a 25km stretch of volcanic rock located off the north coast of Timor-Leste, Southeast Asia’s youngest and least visited nation.

There’s no mass tourism on Atauro, but Marques, a local fisherman and homestay host, still faces the challenge of overexploited marine populations and dwindling island resources. Timor-Leste has a unique solution, though. In Atauro, communities are resurrecting traditional Timorese land management laws known as Tara Bandu while developing community-based tourism initiatives to preserve the most biodiverse coral reef in the world.

Marques and his wife Lourdes had welcomed me into their homestay the previous day with fried bananas and strong Timorese coffee; a welcome relief after the rain-soaked ride on the open deck of the Laju Laju car ferry from Dili, Timor-Leste’s coastal capital. The Marqueses were confident the sun would be shining the next day and organised a spot for me on a snorkelling trip the following morning.

“Timor-Leste has some of the most significant marine resources in the world,” Manuel Mendes later told me enthusiastically over the phone from Dili as I conducted post-trip research on Atrauo’s extreme levels of biodiversity. Mendes is the Timorese director for Conservation International, the organisation that carried out the first extensive marine survey of Atauro in 2016.

Marine scientists from Conservation International concluded that Atauro has the highest average of reef fish species in the world after recording an average of 253 unique reef species across 10 dive sites during their research. In total, 642 distinct species were recorded. A few months later, another survey recorded 2,287 migratory whales and dolphins from a total of 11 species off the coast; there’s also a population of dugongs, three species of sea turtle, and the odd saltwater crocodile that crosses the Ombai-Wetar Strait from mainland Timor.

“They found a lot of important reef systems and a lot of fish species,” Mendes said humbly. “But the total species count has increased since then. We have beautiful, resilient corals, and now a large part of them are in Marine Protected Areas.”

Since the 2016 survey, 12 Marine Protected Areas have been established on the reef to protect the astounding levels of biodiversity for future generations, while homestay initiatives and tourism activities successfully provided additional income (pre Covid-19) to local fishermen.

Although my homestay host was spearfishing that day, Marques had arranged for me to join another group of snorkellers already heading out onto the reef with other fishermen. After pushing the fishing boat off the beach, I was soon on my way to one of Atauro’s Marine Protected Areas, where Tara Bandu prohibits fishing.

“Tara Bandu is a treaty between the people, the ancestors and the environment that manages natural resources, social conflicts and spiritual relations at the same time,” explained Birgit Hermann, country manager for Blue Ventures, another conservation group working on Atauro. “The people of Timor-Leste have a strong animist identity and have lived in harmony with nature for thousands of years. And now, the Tara Bandu customary law is currently enjoying a resurgence.”

You may also be interested in:
• The ‘degenerate’ city lost in the sea
• An island with a ‘sea of seven colours’
• A nation without access to its own sea

Tara Bandu is used to enforce a prohibition on a particular resource. Literally, Tara Bandu means the “Hanging Law” because to signify that a Tara Bandu is in force, a ceremonial symbol that represents the prohibition is hung from a wooden stake. Tara Bandu is flexible, and a prohibition can be placed on a single endangered species or used to create an entire no-take Marine Protected Area on the reef.

Hermann explained how the data supplied by local fishermen and conservation groups like Blue Ventures helps communities to manage their underwater resources and decide which Tara Bandu to implement, and where. “We help to put data in the hands of fishers so that they can enact their own approaches to marine protection and fisheries management, such as temporary and permanent coral reef closures,” she said.

Tara Bandu might be historical, but local communities have only had the power to implement Hanging Laws themselves since Timor-Leste gained independence from Indonesia in 2002.

“Tara Bandu is the way our ancestors protected our nature and natural resources, but the Tara Bandu system was really adopted by Timor-Leste after independence,” said Mendes, who saw a resurgence of traditional conservation techniques in the early years of independence. “During the Indonesian time, there were strict laws, lots of civil servants, forest guards, police, military. The Indonesians had sufficient people to control the natural resources.”

Timor has suffered centuries of colonisation and exploitation. The Portuguese arrived in search of sandalwood and spices in the 1500s, and when the Dutch began colonising the western half of Timor a century later, the island would be carved in two by the competing colonial powers. West Timor became an Indonesian province when the Dutch were thrown out after World War Two, but the eastern half of Timor remained a Portuguese colony until 1975 when an abrupt revolution in Lisbon led to a declaration of independence in Dili.

Timor-Leste enjoyed just nine days of freedom before the encroaching Indonesian military launched a devastating invasion from the west in December 1975. Timor-Leste wouldn’t see independence again until 2002, after years of occupation and guerrilla warfare.

“After independence, we had limitations on the number of forest guards and police; it was really difficult for us to control the natural resources, especially the forests and fisheries,” said Mendes, who helped establish Timor-Leste’s first national park in 2008 in the far west of the country. “So that’s why we promoted this traditional ceremony. We wanted to give more power to the community. Tara Bandu became a way to bring the community together again after the occupation, and a way to protect the natural resources.”

The current was strong as I rolled into the water. Atauro is located on the southern edge of the Coral Triangle, a vast area of ocean that encompasses coastal areas in Indonesia, Malaysia, the Philippines, Papua New Guinea, the Solomon Islands and Timor-Leste. The Coral Triangle is known as the “Amazon of the Seas”, but even here, Atauro’s biodiversity is considered exceptional.

Atauro’s biodiversity is a result of its location between two deep-water straits, which are fed by the Indonesian Throughflow, a warm (but strong) current that pushes water from the Pacific to the Indian Ocean, creating rich feeding grounds for marine life along the way.

The same strong currents and deep water that bring marine life to Atauro also keep fishermen like Marques close to shore, leading to overfishing in the most accessible areas. It’s these areas where Tara Bandu have been used to establish Marine Protected Areas, and where I was spending the rest of the morning snorkelling.

Rainy season run-off from the island had reduced visibility, but the coral still shone through the sediment. A sea turtle fed lazily off the reef and huge shoals of tropical fish darted around the corals, filling the view from my mask in all directions. I drifted over micro and macro sea life, duck-diving beneath the waves for a closer look at a tiny nudibranch or holding my breath to peek under the corals in search of lobsters, groupers or any other sea-wonders that awaited me. In the dry season, the sea is much calmer, visibility more extensive, and passing whales can be seen from the beach.

Tara Bandu became a way to bring the community together again after the occupation, and a way to protect the natural resources.

When the storm clouds above inevitably opened, it was a choppy ride back to shore. At the homestay, Lourdes was cooking rice while Marques gutted the fish he’d caught. The Marqueses were excitedly planning homestay extensions and new hiking routes (more rooms, and more activities for more tourists) when I caught the ferry back to Dili after a few days of snorkelling.

It’s hoped that in the near-future Atauro’s Tara Bandu managed Marine Protected Areas can be united to form Timor-Leste’s second national park. In Southeast Asia’s least visited nation, however, the pandemic has demonstrated the fragility of tourism in a place where tourists were already relatively rare.

“Community-based marine tourism offers huge potential to help diversify coastal livelihoods away from a reliance on fishing,” Hermann told me. “However, with the borders being closed, there are not so many tourists anymore. But the communities on Atauro are looking forward to welcoming international tourists again once it’s possible – you will not be disappointed!”

While travelling in Timor-Leste can be a challenge due to a lack of infrastructure, there’s plenty to draw the adventurous traveller. Timor-Leste’s highest mountain is 2,986m tall and can be summited on a weekend trip from Dili; there are sombre but moving tales of guerrilla warfare and student protests to uncover in the capital’s Resistance Archive and Museum; there’s excellent snorkelling around the undisturbed waters of Jaco Island in the far west of Timor-Leste; plus at least 20 languages and dialects to get to grips with as you voyage across the young nation.

Tourism is in its infancy here though, and a politician I met in Dili summed up the difficulties faced by Timor-Leste when he told me how the government rejected an offer from a Las Vegas-based company to build a casino resort on Atauro. “We want to keep it beautiful,” Harold Moucho said. “There is some of the best diving in the world there, and we don’t want another Bali.” But with oil reserves in the Timor Sea drying up, lucrative resorts could become an appealing source of revenue for a cash-strapped government.

Mendes reminded me of what’s at stake in places like Atauro: “When we lose the beauty of our underwater reefs, it’s not only about Timor,” he said. “It’s a loss for the whole world.”