Are these the new ‘superfruits’? 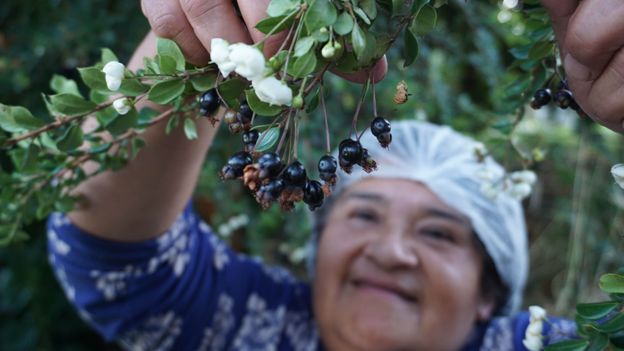 When José Luis Calfucura looks back on his childhood trips to the ancestral Mapuche heartland of La Araucanía – a lush landscape of emerald lakes and puffing volcanoes in the south-central part of Chile – his memories often involve purple teeth.

“The adults would tell us kids to go look for maqui berries just so they could laugh at the results,” he recalled. “After we’d eat them, we’d end up with our whole face painted purple.”

As a kid, the maqui was merely a curiosity found near his parent’s hometown – something that indigenous elders told him would give you the energy needed to last the day. Now, as the most renowned Mapuche chef in the Chilean capital of Santiago, Calfucura has made maqui and other native berries from the Southern Cone of South America some of the main protagonists at his restaurant Amaia.

“We have cakes with maqui, pisco sours with maqui, we use it as a natural dye in the bakery and we also make a maqui mayonnaise that we put on top of fried fish or alongside native potatoes,” he explained, noting that the berry has a sweet flesh with a slightly bitter seed.

Calfucura is hardly alone in his newfound appreciation for this endemic berry. It turns out the reason his teeth turned purple as a kid is because maqui is an exceptionally rich source of anthocyanins, a natural pigment and potent antioxidant. In fact, maqui berries contain one of the highest ORAC values (the most common method of measuring antioxidant quantities) of any known fruit – higher than so-called “superfruits” like the pomegranate or açaí.

Of course, the Mapuche have long known that these native foods carry special properties. Scientists are now catching on. The maqui is but one of more than two dozen Patagonian berries they’ve begun to study – and with good reason. One of the most famous berries, the strawberry, traces its origins here (what we eat today is a cross between the Virginia strawberry and the Chilean strawberry). The hope is that, as more people learn about the powerful properties of Patagonian berries, they might just find new homes on supermarket shelves outside the region.

Of all the berries native to Patagonia, the maqui (Aristotelia chilensis), murta (Ugni molinae) and calafate (Berberis microphylla) have received the most attention for both their distinct flavours and potential health benefits. The juice of these powerful berries was like an ancient form of Red Bull used to fuel battles and power expeditions of the Mapuche, Tehuelche, Selk’nam and other indigenous groups.

You may also be interested in:
• Mexico’s lost pre-Hispanic ‘superfood’
• Japan’s unknown indigenous cuisine
• How the West got turmeric wrong

Visitors to popular Patagonian parks like Torres del Paine in Chile or Los Glaciares in Argentina, may be most familiar with calafate, as the small, blue berry is widely found alongside hiking trails. It’s also deeply rooted in local folklore: legend has it that anyone who eats the sour-sweet calafate berry will find themselves transported back to Patagonia’s rugged landscapes in the near future. The story has its origins in a tale from the indigenous Tehuelche, who inhabit the southern tip of the continent and believe an ancestor turned herself into a calafate bush to give elders the energy needed to survive long journeys.

The murta, meanwhile, is a more aromatic and herbal fruit found a bit further north, mostly on the Chilean side of the Andes. Of the same botanical family as the guava, it’s actually closer in both size and colour to a cranberry. Queen Victoria is said to have been so taken by this South American delicacy that she had it grown in Cornwall in the 19th Century specifically for her table. These days, you’re more likely to find murta outside of South America in New Zealand, where it is marketed as a “New Zealand cranberry”, or Australia, where it goes by the name “Tazziberry”.

Murta and maqui are the star ingredients of Maqueo Sabores Étnicos, a wild fruits business based at Lago Maihue, a fjord-like lake encased in the temperate rainforests of the Andean foothills near Futrono, Chile. This female-led Mapuche initiative is run by the mother-daughter team Gladis Lefin and Claudia Manquepillan.

Because her ancestors didn’t have refrigerators, she says they would preserve the berries found in the surrounding forests by making jams, dehydrating them under the sun or macerating them in aguardiente alcohol. Today, Manquepillan and her mother freeze-dry the berries into snacks and powders, press them into juices, cook them into jams and ferment them into a syrupy liqueur. They offer 17 products in total, but still sustainably forage the berries as a community just like in generations past.

“We’re doing what we have always done for the home, but on a much larger scale,” she said.

Each season, they collect 5,000kg of maqui, as well as a combined 2,000kg of murta and another local berry called arrayán (Luma apiculata), which Manquepillan says is relatively tasteless until you cook it, at which time it becomes extremely herbal – “almost like eucalyptus”. The 27 families who help with each harvest celebrate afterwards by drinking chicha, a beverage made by fermenting the berries.

“Our ancestors also used these berries as a natural dye for textiles and in medicines,” she said. “The fruit can help with stomach ulcers, and you can grind the leaves into a paste to heal wounds or for dental problems.” Berries like maqui were also used historically for their antiseptic, antidiarrheal and antipyretic (fever-reducing) properties. As it turns out, the native fruits may have even more uses still.

Researchers Guillermo Schmeda Hirschmann and Cristina Theoduloz, both of the University of Talca in Chile, first got interested in regional berries by studying native strawberries (Fragaria chiloensis), which come in both red and white varietals. Those studies segued into new ones on Chilean raspberries (Rubus geoides) and other wild fruits with more common cousins, including native currants (Ribes magellanicum).

The husband-and-wife team – she’s a biologist and he’s a chemist – have travelled throughout Patagonia from their home in Talca to the far corners of Tierra del Fuego in search of forgotten berries, many of which are disappearing alongside native forests.

Theoduloz has dedicated so much of her life to these berries that she describes them in the way a sommelier might talk about wine. “The calafate is sweet and a bit astringent with a more acidic taste,” she said. “If we talk about the native raspberry, it is very similar to the commercial one, but its more acidic with a stronger aroma, almost like a perfume… If you compare this to murta, it’s a completely different aroma and flavour; there’s nothing else in South America that tastes like it.”

Hirschmann says that beyond tasting good, the substances contained in many of these native berries are able to inhibit the enzymes associated with the uptick of sugars or from lipids, making them useful for those with metabolic diseases like diabetes, high blood pressure or chronic inflammation.

Theoduloz and Hirschmann’s research has also shown that some of these berries have anti-inflammatory effects, while other researchers have found that they may help with the management of cardiovascular diseases and respiratory disorders, as well as counteract skin aging.

Even with all this recent research, there remains little interest in commercialising the endemic berries, despite the fact that Chile (which has the greatest quantity of them) is the largest fruit exporter in the southern hemisphere.

For now, the only berries you’re likely to find outside of the region are maqui, murta and calafate. Maqui is marketed in teas, powders, dietary supplements and anti-aging cosmetics. Calafate also comes in powder supplements, as well as jams. Murta is sold as a fresh fruit in Australia and New Zealand, and is a key botanical (alongside maqui) in the gin-like Patagonian spirit Trakal, which is available in the US and Canada.

Of course, there are many other wild berries that could be equally valuable.

“The question is, what do we want?” Hirschmann asked. “Do we want to develop our own fruits and offer them to the world, or do we want to produce here for the rest of the world what other people are asking for?”

Ancient Eats is a BBC Travel series that puts trendy foods back into their ‘authentic’ context, exploring the cultures and traditions where they were born.

Prince Philip’s Cause of Death Listed as ‘Old Age’

Airbus to Resume Work Upgrading A320 Family FAL in Toulouse