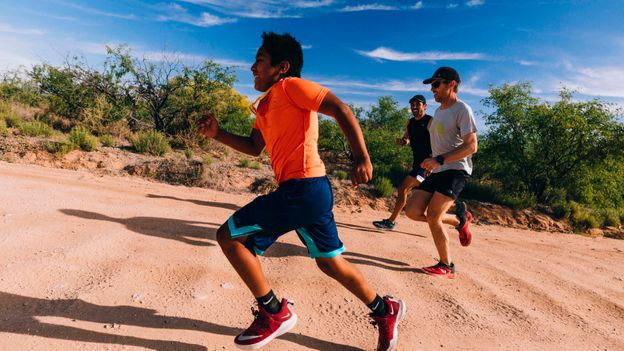 On a sunny day in April 2019, three elite long-distance trail runners – an American, a Mexican and a Mexican-American – met in a deep, red rock canyon on the banks of the Rio Grande in Texas. Together, they waded into the muddy waters that separate Mexico and the United States.

This was the beginning of the trio’s “Invisible Wall” expedition, a 10-day running journey to explore the desert landscape and meet the people who live along the border. Mike Foote, Mauricio Carvajal Llaca and Mario Mendoza Jr travelled from Big Bend National Park in Texas to the Pacific Ocean at Tijuana, running more than 200km of desert trails and border roads alongside ranchers, kids, tribal members and urban jogging clubs.

“The border is such a lightning rod of opinion and that opinion is often black or white. I was curious about what was really going on,” said Foote, a freckled, fair-haired Midwesterner who now lives in Missoula, Montana. He figured the best way to learn about the region and its often-politicised immigration issues was to listen to the people who straddle both countries – and to connect to those people through the simple act of placing one foot in front of the other.

Foote most enjoys exploring wild landscapes under the power of his own legs. Contrary to his surname, he wasn’t always a professional runner. He played baseball while growing up in Ohio rather than hoofing it over hundreds of kilometres of rugged terrain. But when he moved to Missoula in 2004, Foote began running the trails that lace across the mountain town.

Five years later, he started winning some of the toughest ultra-marathons in the world. In 2012, Foote set a new course record for the Bighorn Mountain Trail 100, a remote 162km course that includes more than 12,500m of elevation change and whose website jokingly informs participants that the course will be marked by “orange flagging tape frequently attached to trees, bushes, rocks, rattlesnakes and black bears”. That same year, The North Face asked Foote to join its team of global athletes.

Foote thrives on navigating to alpine ridgetops. He once held the world record for the most vertical feet climbed skiing in a single day. In 2015, he organised a three-week running expedition across 966km of harsh, icy mountain ranges to draw attention to conserving the Crown of the Continent ecosystem in the Canadian and US Rocky Mountains.

When a fellow North Face athlete called to ask if he wanted to run with the Invisible Wall expedition, Foote didn’t think twice before accepting. “It’s right in line with what I enjoy – experiencing culture and landscapes in a slow manner.”

Foote, Mendoza and Carvajal Llaca christened their trip with a swim in the Rio Grande River, called the Rio Bravo on the opposite bank in Mexico, which serves as the international border.

You may also be interested in:
• The world’s most exclusive travel club?
• The war correspondent walking the world
• The US’ remote northern outpost

Carvajal Llaca lives in Mexico City and works in insurance and risk management when he’s not running. He became hooked on long-distance races after finishing his first marathon in 2006. Now he competes in ultra-races, running days in a row to achieve distances of up to 320km. In Texas, he regaled his two new friends about a recent race in Oaxaca that took four days, during which he slept on the ground for a total of two hours and 55 minutes, got bitten by a tarantula and rubbed his skin raw from the sand inside his shoes.

“This kind of distance, it breaks your mind,” Carvajal Llaca said.

While running, driving and camping together, the athletes had plenty of honest conversations among themselves about their own experiences in American and Mexican cultures, since all three have spent time in both countries. They agreed that immigration and its social and economic impacts is complicated. But they also agreed that running is the same, no matter the country.

After Texas, the trio drove west to the boot-heel of New Mexico, where they met up with Rocky, a Mexico-born bull-rider who now runs a cattle operation in the US. Foote felt sombre as he ran through the desolate, exposed sands of the Chihuahuan Desert and pictured the thousands of people who have attempted to cross its unforgiving contours in search of a better life. “It is significantly harder to survive out there,” said Foote.

Mendoza agreed. “These people are trying to come to a country where the ‘grass is greener’, but then they’re stuck in this tough 110-degree desert.”

Mendoza started running during high school and has since won half a dozen national championships for trail races ranging from 10km to 167km. He grew up on an avocado ranch in central California where his dad worked. Each year, his family drove south to spend one month with his grandparents in Michoacán state, usually crossing the border at Tijuana.

Partly because he struggled with his bicultural identity growing up, Mendoza now uses running as a platform to help people bridge different cultures. He coaches at a high school near his home in Bend, Oregon, and puts on running events to bring together the local youth who are white, Latino and Indigenous.

“Diversity for diversity sake doesn’t bring people together. You have to get to know each other,” said Mendoza.

After his experience running with Foote and Carvajal Llaca, Mendoza says he has a broader picture of the border than the one he had before. “I like the natural geographic barrier of the river in Texas. But the walls in Tijuana don’t sit well with me – they just keep getting bigger. It’s hard because I love both sides, and the answer is not as simple as adding more walls.”

The highlight of the expedition for all three runners was visiting the Tohono O’odham Nation in southern Arizona (tohono means “desert” and o’odham means “people”). Anthony Francisco Jr, a member of the O’odham Nation who also competes in marathons, welcomed them with a traditional ceremony that honours the important role of runners in the O’odham community.

“Running has always been very much a part of who we are as a people. It’s more spiritual than simply a hobby or a way to stay in shape,” explained Francisco Jr.

He described stories of past coming-of-age ceremonies where girls would run to meet the sun, or a young man would run all the way to the ocean. For the O’odham, runners also traditionally carried messages and goods between dispersed communities. These runners were held in high regard.

The Indigenous O’odham inhabited the desert for thousands of years before either Mexico or the US were nations, migrating between the mountains to hunt and the lowlands to farm. But their land was artificially divided between the two countries in the 1853 Gadsden Purchase (or Treaty of La Mesilla) when the US acquired present-day southern Arizona and south-western New Mexico from Mexico.

Today, 10% of the O’odham Nation’s 34,000 members live south of the border. Although tribal members are supposed to be able to pass freely between the two countries, the border has become a barrier for migration. Francisco Jr cited several instances of O’odham members who were detained and deported back to Mexico while trying to access services in their Nation’s northern communities.

The three visiting athletes ran beside O’odham youth, learning more about what it’s like to live in a community bisected by an international border. Foote described seeing many US Border Patrol agents on the O’odham Nation as well as evidence of people crossing illegally from the south, since their land is a section of the border with no walls and few fences.

“We ran past discarded water bottles, camouflage clothing and even pieces of carpet that immigrants wear as booties to disguise their footprints,” said Foote. “I felt sympathy for the O’odham living at this crossroads, but also appreciated their activism and their willingness to show up to make a better world and a better life for themselves.”

The physical barrier between the two nations grew larger and more imposing as they moved west, turning into a two-storey-high double wall near San Diego. Here, the runners crossed the border into Tijuana and met up with Latinas a Correr, a group that supports and motivates women who run in the Tijuana/San Diego area.

The ultra-runners jogged the last 10km along the border with a dozen members of the club, following the graffiti-tagged, rust-coloured wall as it paralleled a busy highway. They ended their journey at the Pacific, letting the cool waves lap at their toes. But the wall kept going.

“It was really surreal to see that barrier continuing out into the ocean,” said Foote.

Now back in Montana, Foote keeps in touch with his fellow border explorers and hopes to visit Carvajal Llaca in Mexico City. His takeaways from the Invisible Wall expedition are even more meaningful amid the current spotlighting of racial injustice in the US.

“Learning from others, really listening and seeing what they’re doing, was so powerful,” said Foote. “It’s not wall or no wall. It’s not black or white. It’s not yes or no. It’s more important than ever to slow down and have nuanced conversations.”

BBC Travel celebrates 50 Reasons to Love the World in 2021, through the inspiration of well-known voices as well as unsung heroes in local communities around the globe.

The Chinese county famed for its double-yolk duck eggs