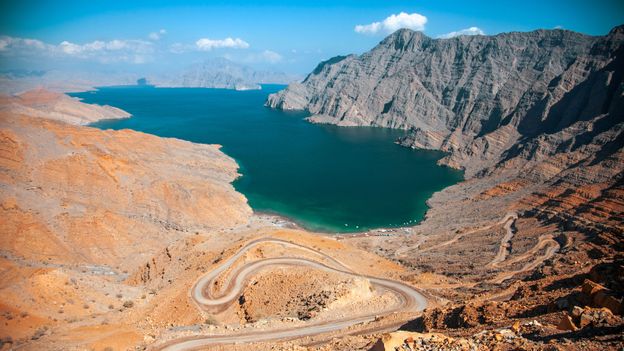 Hidden among the wild fjords of northern Oman, between the mountains and the sea in a quiet bay, sits the small village of Kumzar. This is the country’s northernmost frontier, but Kumzar has a distinct atmosphere from the rest of Oman. In fact, its glorious isolation – the village is accessible only by an hour-long speedboat ride or a 2.5-hour trip on a sailing dhow from the nearest city, Khasab – has led Kumzar to develop a language and culture all of its own.

Kumzar’s unique character owes much to geography. The village sits on the Musandam Peninsula, a tiny coastal exclave of Oman separated from the rest of the country by 100km of the UAE’s rocky desert. Musandam’s nickname – ‘the Norway of Arabia’ – derives from its wildly dramatic coastline, ravaged by fjord-like khors – although, unlike their Scandinavian counterparts, these rocky inlets were formed not by the steady slithering of glaciers but rather by the collision of tectonic plates, which crack the Earth’s crust from beneath like terrible creatures vying to emerge from an egg.

Beyond Kumzar’s fjord lies the Strait of Hormuz; beyond that, Iran. For some 700 years, the villagers have been absorbing a farrago of influences from the Strait, long a crucible for foreign trade, culture and geopolitical high drama.

This is reflected most strikingly in the Kumzari language, which is unlike any other. “Kumzari is a mixture of old Persian and Arabic, and other languages like Akkadian, Assyrian, Turkish, English and Hindi,” said Makeyya Al Kumzari, a local who studies Kumzari language and culture. “It is spoken here and nowhere else.

Kumzari is our mother tongue, and when we’re together we don’t speak anything else

The language is a matter of fierce local pride. Moyath Al Kumzari, who captains dhow tours around Musandam, told me: “Kumzari is our mother tongue, and when we’re together we don’t speak anything else ­– even though we all know Arabic, too.”

Many Kumzari words may sound familiar to English speakers. A star becomes a stārg, lotion is lōšan and a dar is a door. A niglis is a necklace, and, rather pleasingly, a plank becomes a pling. Many of the words that Kumzari takes from Arabic and Persian, meanwhile, sound closer to how they would have been pronounced in the medieval era than in the modern day. The language’s unique melange of influences, along with its survival in an overwhelmingly Arabic milieu, has long intrigued linguists like Christina van der Wal Anonby and Erik Anonby, who lived and worked in Kumzar for a year.

“Kumzar has been at the centre of a socially and historically vibrant regional ecosystem for centuries, so although it can only be reached by boat, it would be a mistake to think about it as ‘isolated’,” Erik said. “Kumzar was very important historically: one of the few places with a well with plentiful, fresh water, between the trading centres of Basra, Muscat, Zanzibar, India and beyond.”

The Anonbys were welcomed into the village as members of the community, joining the Kumzaris in their daily routines alongside carrying out their linguistic research. Christina described mornings chatting with the local women over tiny cups of cardamom coffee, and afternoons spent processing dates and fish or weaving palm leaves. She believes this hospitality derives from Kumzar’s unique location. “I think they are so welcoming because historically they would regularly take in sailors that had survived shipwrecks in the Strait, hide ships in the fjords when they were fleeing pirates, or replenish passing ships’ fresh water supply from the well in Kumzar,” she said.

You may also be interested in:
• Japan’s forgotten indigenous people
• The Syrian sound that causes ecstasy
• Where people speak Elizabethan English

Kumzaris make their living from the fish that live in the khors for nine months of the year, relocating to Khasab to harvest dates when the searing summer heat empties the water of fish. The sea gives Kumzar life, and consequently, Erik explained, Kumzari is a language shaped by the sea. “We’ve found 200 distinct names for types of fish in Kumzari,” he told me, “and many of these words aren’t similar to the names of fish found in any other language in the world.”

Kumzar’s unique geography, packed between sheer mountain walls on three sides and the ocean on the other, has shaped not just its language, but the way its people interpret the world around them. “Rather than using the cardinal directions north, south, east and west,” as we do in English and Arabic, “their world is oriented to the directions of ‘up’, toward the mountains, and ‘down’ toward the sea,” Erik said. Maritime matters are never far away from social interactions either: Kumzaris greet each other with the phrase “či kawlā?” – “What wind is it?” Even the goats here are said to taste of fish; they eat sardines when there is nothing else on dry land.

The sea looms large over local folk tradition. Cowrie shells hang from the sterns of dhows, said to ward off the evil spirits that threaten to pull sailors to shipwreck. Kumzari folk stories also often revolve around the ocean and Kumzar’s unique location. “After a long day of fishing, it’s time for some entertainment. Tales and storytelling are very popular in the village,” explained Makeyya. “Stories are mostly impacted by the environment; they are about the sea and its creatures. There are also stories about the well that made Kumzar a significant place for travellers to stop and resupply with drinking water.”

“Kumzaris have their own complete oral library of traditional songs and folk stories,” Erik added. “Aliko Shobubo, who died recently, was one of the great Kumzari storytellers. In his memory, he held a whole oral collection of folktales every bit as rich and detailed as One Thousand and One Nights but which he always told with a flair of his own, setting the stories in Kumzar using authentic local characters.”

Other aspects of Kumzari culture are similarly vibrant. “Kumzari people are known across Arabia for their lively, colourful, week-long weddings filled with days and nights of dancing, traditional songs and lavish feasts where the whole community gathers together,” said Erik.

Kumzar may be far from anywhere, but it is no backwater. The village is self-sufficient, with its own school, hospital and desalination plant. Local pride burns strongly here, and is perhaps nowhere better expressed than Kumzar Football Club, which, remarkably, overcame teams of far greater resources, both human and financial, to win Oman’s regional cup in 2016. “It was a great achievement for our club, and all Kumzari people are proud of that moment,” said Moyath. “It definitely encouraged our sense of local identity.”

By keeping Kumzari alive, they’re enriching the cultural heritage of the whole world

The future for Kumzar, though, is far from clear. “Kumzar is changing,” said Moyath. “The new generation are very invested in their education, and they often move away to Muscat for their studies.” The days of generations past, when locals would exclusively speak Kumzari and not countenance learning Arabic, are over, and young people often seek employment on the mainland or in the UAE after graduating.

“Thanks to commercial fishing, fish stocks are depleted, and the livelihood of Kumzari fishing crews is precarious,” said Erik. “With the advent of universal education, TV, and now the internet, Arabic finds its way into every moment of the Kumzaris’ day. Over the last 10 years there’s been a big change, with most families now teaching their children Arabic as a first language. Children can still understand Kumzari but they don’t speak it well, and the passing on of the language between generations is disappearing quickly.”

There are grounds for optimism, however. A group of local experts and enthusiasts are working with academics like Christina and Erik to establish a Kumzari writing system and help preserve their language and culture.

“Thankfully, there’s a group of dedicated Kumzari people who don’t want to lose all the history, cultural knowledge, their ability to survive and thrive against daunting environmental odds, and their uniquely Kumzari identity that the language keeps alive,” Erik said. “By keeping Kumzari alive, they’re enriching the cultural heritage of the whole world, since there’s no other language like Kumzari.”

What’s more, despite young people moving away for university, a high birth rate means there should be no shortage of young Kumzaris to keep the language alive. “The population is increasing, and new houses are being built in the mountains above Kumzar,” said Moyath.

Just as important to the Kumzaris’ future will be their passionate sense of local pride. “We Kumzaris always say ‘Kumzari maafi couf’ (Kumzaris never fear) because our tradition is to fight, whether against nature or other enemies,” said Moyath. “We are all proud to be from Kumzar. We have a responsibility to grow alongside modern challenges, but we will never leave our culture and language behind.”

Our Unique World is a BBC Travel series that celebrates what makes us different and distinctive by exploring offbeat subcultures and obscure communities around the globe.

How to Prune Bigleaf Hydrangeas