The former governor of Indiana feels ‘blessed by the work of these dedicated healthcare professionals’ after undergoing successful procedure to implant a peacemaker.

AceShowbiz –
Former Vice President Mike Pence is recuperating after undergoing a heart procedure. The 61-year-old went under the knife on Wednesday, April 14 to implant a peacemaker after experiencing symptoms associated with a slow heart rate.

The office the former VP addressed his health condition in a statement released on Thursday. Noting that the former governor of Indiana has in the past disclosed his medical history, including a diagnosis of asymptomatic left bundle branch block, it revealed, “Over the past two weeks, former Vice President Pence experienced symptoms associated with a slow heart rate.”

Upon consultation with his doctors, Pence “underwent a procedure yesterday at Inova Fairfax Medical Campus in Falls Church, Virginia, to implant a peacemaker,” the statement continued. “The routine surgery was successful, and he is expected to fully recover and return to normal activity in the coming days.”

In the statement, Pence also expressed his gratitude toward the medical team who has been taking care of him. “I am grateful for the swift professionalism and care of the outstanding doctors, nurses and staff at Inova Heart and Vascular Institute, including Dr. Brett Atwater and Dr. Behnam Tehrani,” he said.

He added, “I also appreciate the consultation of my longtime Indiana physicians, Dr. Michael Busk and Dr. Charles Taliercio at Ascension St. Vincent. My family has been truly blessed by the work of these dedicated healthcare professionals.” 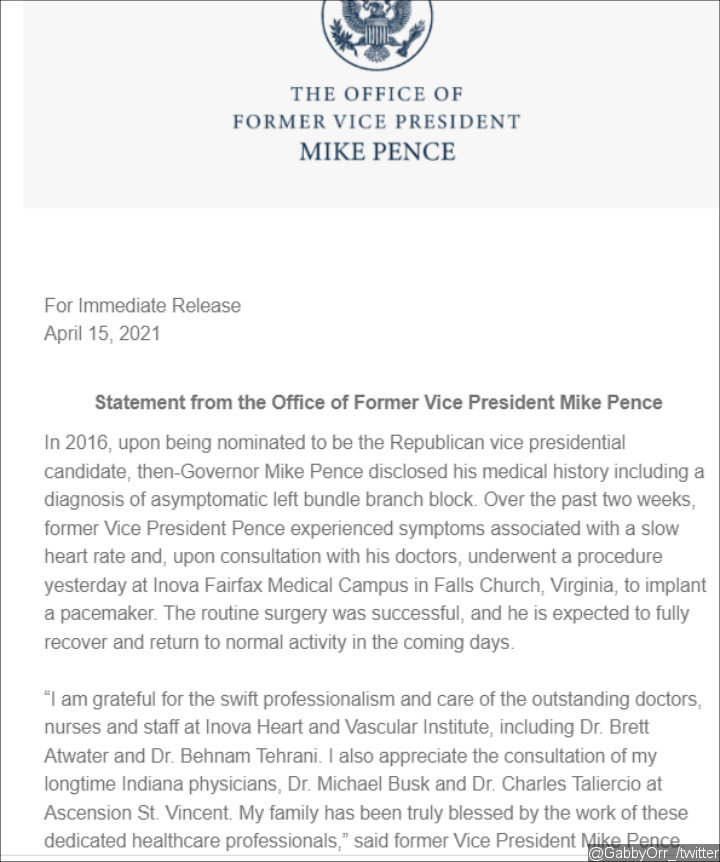 Back in January, Pence and his wife Karen were reported to be homeless after leaving the office. Allegedly having no permanent residence, the former second couple was said to be “couch-surfing” at the residences of various Republican politicians in the state at the time.

According to Business Insider, some of the places the Pences were crashing in included a cabin that current Indiana Governor Eric Holcomb uses for a retreat and the former second-in-command’s brother’s home in Columbus.

Earlier this month, Pence launched “Advancing American Freedom,” a political advocacy group. The former lawyer has been touted as a potential candidate for the GOP’s presidential nomination in 2024, but he has yet to officially declare if he intends to run for office.