The noodle taking the world by storm 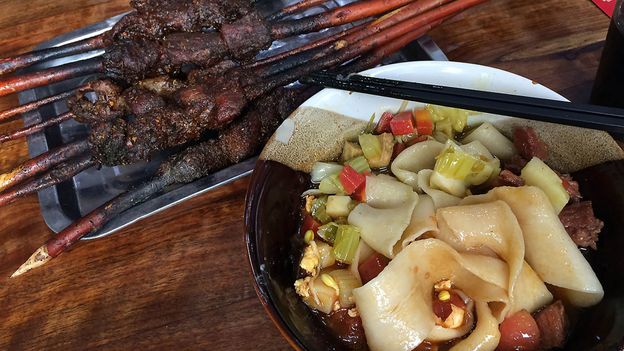 A rhythmic thumping sound echoed through the restaurant-lined street in north-west China, emanating from multiple directions, their cadences briefly falling into sync before disbanding once again. I reflexively turned my head in the direction of the nearest thud to see a chef working in front of his shop, swinging a hefty rope of dough between his hands.

The noodles were as wide as a belt

He raised the strand and, firmly, deftly, slapped it repeatedly against the countertop, each dexterous motion coinciding with a resounding thwack. As he continued slamming it, the dough stretched and elongated to the length of his wingspan. Pinching the centre of the strand, he then split the dough down the middle to form a loop, before tossing it nimbly into a waiting pot of bubbling water.

Curiosity piqued by this display, I approached the chef to request a serving and, minutes later, tucked into a bowl of thick noodles drenched in hot chilli oil and vinegar and sprinkled with spring onions and garlic. The noodles were as wide as a belt and nearly as long as one too, their firm texture offering a satisfyingly substantial bite. The slapping technique, as it turns out, generates a chewy consistency that absorbs the rich flavours of the seasonings.

Here in Xi’an, the capital of China’s Shaanxi province and one of the country’s oldest cities, the craft of noodle-pulling is so intertwined with that slapping sound that the distinctive noise ended up inspiring this dish’s curious name: biang biang noodles.

The “biang” character is onomatopoeic, meant to mimic the sound of dough hitting a counter. It is also more complex to write than any character in the Chinese language, with a whopping 58 strokes (though, depending on whom you ask, this number may vary slightly). Given how much thought must go into writing it, I was surprised to discover that the character doesn’t actually exist – at least, not according to official dictionaries. That’s because the character is entirely a folk creation. Upon closer inspection of the symbol, I realised that it is also comprised of many distinct elements that, together, paint a picture of Xi’an’s rich history.

Hiding in this intricate biang diagram, for example, is the Chinese character for silk. Xi’an was the eastern terminus of the Silk Road, the vast ancient network of East-West trade routes that facilitated the exchange of goods, ideas and technologies for centuries. Along those roads, horses not only provided a primary means of transport, but were traded as a commodity. It makes sense, then, that the biang character additionally contains the symbol for horse and appears to pay homage to these animals’ important historical role in the region. On either side of the horse symbol, the Chinese character meaning “long” or “length” also appears; whether interpreted as a reference to the Silk Road or to the noodles, both would seem appropriate.

It’s unclear exactly how the complex biang character originated, but its creation is steeped in legend. One widely told story credits it to a young scholar from the Qin Dynasty (221-207 BC) who didn’t have enough money for his bowl of biang biang noodles and offered to invent a character in lieu of payment. Today, there are amusing poems and riddles people can recite to help recall of the complicated character’s numerous strokes.

You may also be interested in:
• Sichuan peppercorn: A Chinese spice so hot it cools
• How kimchi rekindled a decades-long feud
• Hong Kong’s rare noodles made by seesaw

“[They’re] kind of a mnemonic of how to write it,” explained Jason Wang, whose family originates from Xi’an and owns the New York City restaurant chain Xi’an Famous Foods. “But [the riddles are] also just quirky. It’s just for fun. I think people in Shaanxi have a good sense of humour.”

The mystery of the character, coupled with the shape of the noodle – whose sheer girth sets it apart from the predominantly thinner noodle varieties in China – has given biang biang a permanent place among Shaanxi province’s so-called “Eight Curiosities”, as Wang refers to them. These are regional penchants and customs that have historically been commonplace among Shaanxi residents, but may have been puzzling to outsiders. Among them is the practice of building houses with half a roof, the habit of squatting on top of stools and a tradition of eating noodles as wide as belts.

“It’s kind of like this self-mockery, but in a positive way. And that’s just part of the culture,” said Wang.

In 2005, Wang’s father, David Shi, began cooking this culinary “curiosity” at what was then a small bubble-tea shop in New York City. His food items, rather than the drinks, began to steadily amass a loyal following. Over the years, Wang and Shi grew their little eatery into what is now an eight-restaurant empire across the city, specialising in dishes from their hometown.

“There’s a lot of pride in our traditions and in our heritage,” said Wang. Over the years, their restaurants have not only attracted fellow immigrants from north-west China, but also more and more diverse patrons. “The food is not just for people who know it. It’s for people who want to know it and want to try it.”

Today, restaurants like Xi’an Famous Foods that specialise in regional dishes like liangpi (“cold-skin” noodles), spicy cumin lamb burgers and – of course – biang biang noodles are giving international diners an increasingly nuanced and sophisticated understanding of Chinese food. While many Chinese restaurants overseas serve familiar Cantonese favourites like dim sum or Shanghai-style dishes like braised pork belly and xiaolongbao (soup dumplings), Shaanxi is one region whose flavours have not seen as much global representation. In fact, for many diners who have never set foot in China, Xi’an Famous Foods may be their first taste of Shaanxi cuisine, which is known for its potent and complex aromas, partly influenced by the sour, spicy food of Sichuan province to the south-west and the salty cuisine of the neighbouring Shanxi province to the north-east – as well as its wide array of noodles and lamb and mutton dishes.

Wang believes that increased tourism (before the pandemic) and an expanding Chinese diaspora has generated a burgeoning international interest in China’s diverse regional cooking styles. Travellers enjoy certain dishes in China and want to experience them in their home countries; simultaneously Chinese students and immigrants move abroad and search for the flavours of their hometown. The result has been a growing awareness about the multifarious regional differences in Chinese cuisine.

“Sichuan cuisine has become a lot more popular,” said Sarah Leung, who lives in New York and has recreated many regional recipes for her family’s Chinese food blog The Woks of Life. In recent years, restaurant chains like Malubianbian and Haidilao have brought the famously numbing spiciness of Sichuan-style hot pot to hundreds of locations across the globe. Shimiaodao, another well-known establishment, serves Yunnan Province’s “crossing-the-bridge” noodle dish at locations in North America, introducing the flavours of that Chinese region to diners overseas. “It was interesting to see that [development], to see a wider swath of people becoming aware of these foods,” said Leung.

Now, biang biang noodles may be serving as a similar entry point for international eaters to discover the gastronomic specialties of north-west China.

Another chef spreading Shaanxi-style cuisine is Chao Zhang, owner of London’s Xi’an Impression and its sister restaurant Xi’an Biang Biang Noodles. “People now are getting more globalised than before,” he told me. After moving to London for school, Zhang wound up opening his own restaurant in the capital. “I felt really, really homesick for the food,” he recalled.

In past centuries, Shaanxi’s biang biang noodles were little more than a humble local dish, mostly consumed by time-strapped workers who didn’t have occasion to artfully pull thin noodles. Compared to other noodle varieties from north-west China, biang biang were less known outside of Xi’an. But they were a comforting and beloved staple among locals, for whom the backstory and written character were common knowledge.

As a Xi’anese, you will talk about [biang biang] all the time when you’re a kid, and your grandma will tell you stories about it

“As a Xi’anese, you will talk about [biang biang] all the time when you’re a kid, and your grandma will tell you stories about it,” said Ruixi Hu, who founded Lost Plate, a tour company that organises food excursions around Xi’an. “You know how to write the character from the beginning.”

Now, the dish is traversing land and sea from its humble beginnings to reach the hearts and mouths of diners the world over – a breakthrough that, for many, has been as unexpected as it has been delightful.

“My hometown food brought to the UK – that’s my dream, actually,” said Zhang.

Committed to recreating the dish the way he grew up with it, Zhang explains that biang biang noodles can never be made in advance, and shortcuts aren’t an option. “This is the only noodle [from Shaanxi] that is still handmade,” he said.

The act of pulling these noodles by hand is, after all, a craft that requires practiced skill

Wang seconds this. “It’s freshly made, it has to be freshly made,” he said. “We’re not far enough in tech right now for robots to make this stuff yet.”

The act of pulling these noodles by hand is, after all, a craft that requires practiced skill – something that the noodle shop cooks in Xi’an who, shaping their dough outside in the open air, continually remind passersby. As they demonstrate the artistry of the age-old technique, the repetitive “biang” sound readily cuts through the aural hubbub of busy pedestrian avenues. It’s the constant through-line of the urban symphony, its command over pedestrians’ senses second only to the piquant scent of chilli oil in the air, summoning hungry diners from far and wide.

The Chinese county famed for its double-yolk duck eggs