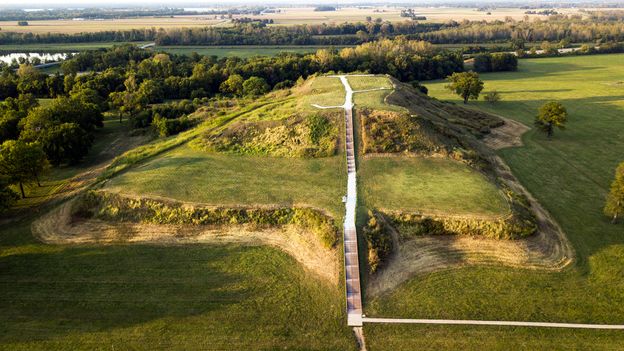 Pity the event planners tasked with managing Cahokia’s wildest parties. A thousand years ago, the Mississippian settlement – on a site near the modern US city of St Louis, Missouri – was renowned for bashes that went on for days.

A cosmopolitan whir of language, art and spiritual ferment

Throngs jostled for space on massive plazas. Buzzy, caffeinated drinks passed from hand to hand. Crowds shouted bets as athletes hurled spears and stones. And Cahokians feasted with abandon: burrowing into their ancient waste pits, archaeologists have counted 2,000 deer carcasses from a single, blowout event. The logistics must have been staggering.

Things are quieter these days at Cahokia, now a placid Unesco site. But towering, earthen mounds there hint at the legacy of the largest pre-Columbian city north of Mexico. A cosmopolitan whir of language, art and spiritual ferment, Cahokia’s population may have swelled to 30,000 people at its 1050 AD peak, making it larger, at the time, than Paris.

It’s what Cahokia didn’t have that’s startling, writes Annalee Newitz in their recent book Four Lost Cities: A Secret History of the Urban Age. The massive city lacked a permanent marketplace, confounding old assumptions that trade is the organising principle behind all urbanisation.

“Cahokia was really a cultural centre rather than a trade centre. It still boggles my mind. I keep wondering ‘Where were they trading? Who was making money?’,” Newitz said. “The answer is they weren’t. That wasn’t why they built the space.”

You may also be interested in:
• The enduring allure of lost cities
• The wickedest city on Earth
• A mysterious US desert civilisation

Newitz isn’t alone in their surprise. Assumptions that commerce is the key to urban life long shaped a Western view of the past, explains archaeologist Timothy Pauketat, who has studied Cahokia for decades.

“It’s definitely a bias that influenced earlier archaeologists,” he said. When excavating cities in Mesopotamia, researchers found evidence that trade was the organising principle behind their development, then turned the same lens on ancient cities across the globe. “People thought that this must be the basis for all early cities. It’s led to generations of looking for that kind of thing everywhere,” Pauketat said.

They didn’t find it in Cahokia, which Pauketat believes may instead have been conceived as a place to bridge the worlds of the living and the dead. For many cultures with roots in ancient Cahokia, “water is this barrier between the world of the living and the world of the dead,” Pauketat said. Sprawling across a landscape that combines solid earth with patches of swamp, Cahokia may have served as a kind of spiritual crossroads.

“It’s a city built to straddle water and dry land,” Pauketat said. Living residents settled in the driest spots, while burial mounds rose up in wetter places. Lidar scans of the site have revealed elevated causeways linking the “neighbourhoods” of the living and the dead, physical walkways that literally joined the realms.

And if living at the cusp of the two worlds sounds rather sombre, Cahokians seem to have seen their hometown as a festive place. In Four Lost Cities, Newitz writes that Cahokia’s planners crafted structures and public spaces devoted entirely to mass gatherings, places where individuals would be swept up by the joy of collective experiences.

Most spectacular of all was the 50-acre Grand Plaza, where 10,000 or more people could come together for celebrations in a monumental space flanked by earthen pyramids.

“It’s hard to capture the intensity, the grandeur, the multi-dimensionality of an event like that,” Pauketat said. For days, food and drink would be carried into the city, where a phalanx of cooks fed people arriving for the festivities. Stockpiles of wild game, berries, fruits and vegetables became shared feasts. Visitors would sleep in temporary housing or the homes of friends, heading to the plaza for dances, blessings and other events.

On the plaza, the crowd’s buzzing energy turned to a collective roar when spectators bet on bouts of chunkey. The game kicked off when a player rolled a stone disk across the smooth surface of the ground. Taut with focus, hundreds of athletes hurled their spears even as the stone still bounced and rolled. The winner was the one whose spear stuck nearest to the chunkey stone, like a massive game of bocce played with deadly projectiles.

Towering poles lining the Grand Plaza may have provided another spectacle of athletic grace, Pauketat said. He imagines men may have climbed the poles or tied themselves in for soaring, airborne dances, a ritual still practiced in some Maya parts of Mesoamerica. “In the Mesoamerican ceremony, you have these big, tall cypress poles put in, and four guys who dress up as bird men and fly around those poles,” he said. “We’ve got those poles at Cahokia.”

Shell beads, feathers and fine leather caught the sunlight as everyone donned their most elaborate costumes for such events, Pauketat explained. Cahokians loved a palette of red, white and black; people styled their hair into elaborate buns, mohawks and plumes. Tattoos adorned some bodies and faces.

When the parties ended, Cahokians swept waste into pits that now serve as accounts of what the citizens ate and drank together. A decade ago, analysis of pottery beakers archaeologists found at Cahokia revealed biomarkers for a species of holly, known as yaupon, that’s the only caffeinated plant native to North America.

Cahokians, it seems, kept the festivities going in part by catching a buzz. And since the native range of yaupon is hundreds of miles from the city site, we know they put significant effort into obtaining it.

That, in turn, may have cemented the plants’ place in ritual life. “Part of their value is in the difficulty of acquiring them,” said anthropologist Patricia Crown, who led the analysis of the beakers. “You had to have the networks to be able to get the substance if it was really important to your religious system.

Today, the site of ancient Cahokia is preserved as Cahokia Mounds State Historic Site, a Unesco World Heritage Site where archaeological work is ongoing. Seventy of the original mounds are protected there, and a long staircase leads to the summit of Monks Mound, with views across the Grand Plaza. Toting audio guides, visitors walk a 10km path winding through grassland, forest and wetlands.

Once again, as in ancient times, a constellation of tall poles aligns with the rising sun to measure passing seasons. The onsite interpretive centre features recreated scenes of life here, along with displays of stone tools and pottery shaped by skilled Cahokian hands.

They fit right into American history

Modern life is not far away: Cahokia is framed by a middle-American sprawl of interstate highways and suburbia. But it wasn’t modern development that ended Cahokia’s thrilling story.

Eventually, Cahokians simply chose to leave their city behind, seemingly impelled by a mix of environmental and human factors such a changing climate that crippled agriculture, roiling violence or disastrous flooding. By 1400, the plazas and mounds lay quiet.

When Europeans first encountered the remarkable mounds at Cahokia, they saw a lost civilisation, explains Newitz in Four Lost Cities. They wondered if some faraway people had built Cahokia, then disappeared, taking with them the brilliant culture and sophistication that had once thrived in the soil of the Mississippi bottomland, where the earth is enriched by riverine floods.

But the people of Cahokia, of course, didn’t disappear. They simply left, and with them Cahokia’s influence wove outward to far-flung places, where some of their most beloved pastimes are cherished to this day.

The yaupon they loved to drink is making a mainstream comeback as a sustainable, local tea that can be harvested from the forest. Chunkey – Cahokia’s favourited game – never went away either. In some Native communities it has attracted a new generation of young athletes and is on the roster with stick ball and blow guns at Cherokee community games.

But it’s more than that. Cahokians loved to kick back over good barbecue and sporting events, a combination that, Newitz noted, is conspicuously familiar to nearly all modern-day Americans. “We party that way all across the United States,” they said. “They fit right into American history.

The trek that’s forbidden to speak of