The places that no longer exist 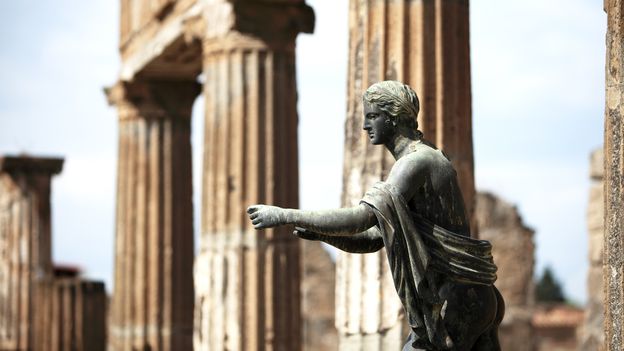 Lost and abandoned places have a powerful pull on the imagination

Late afternoon sun cast long shadows across hundreds of stone faces carved into Bayon Temple as I scrambled deeper into the 12th Century shrine at the heart of Cambodia’s sprawling Angkor site. The trippy portraits swelled from towers and walls, each one with plump lips curved into an unnerving smile.

It was my first day at Angkor, and I knew little of the city’s history then. But wandering through temple after temple, I slipped easily into imaginative reverie. In my mind’s eye, throngs of worshippers carried bright offerings. Chisels rang out as artisans created the exquisite masterpieces around me, while grandiose kings paraded through wide avenues lined with statuary.

“For the very reason that somewhere no longer exists, it can be transformed into the ideal city, the city of one’s dreams,” wrote Aude de Tocqueville in her 2014 book Atlas of Lost Cities: A Travel Guide to Abandoned and Forsaken Destinations. “The lost city is thus poetry, dream world and a setting for our passions and meanderings.”

Indeed, lost and abandoned places have a powerful pull on the imagination. They’re catnip for avid travellers, inspiring a sense of adventure that’s fuelled grand expeditions and tall tales.

We see our lives reflected in the stones, imagine our intimate dramas against their romantic, crumbling backdrops. And if a pall of disaster hangs over many lost cities, even that is softened by passing time.

You may also be interested in:
• The ‘Atlantis of Wales’, rediscovered
• The wickedest city on Earth?
• A $20bn treasure lost at sea

While yarns about lost cities make compelling travel tales, Newitz argues that those narratives too often obscure the real stories behind humanity’s most magnificent places.

That happened at Angkor, where I’d spent sunny afternoons amid the ruins. Newitz explains that the city was actually inhabited when French explorer Henri Mouhot arrived there in 1860 – indeed, had never been fully abandoned – but the visitor couldn’t imagine Cambodian forbears were capable of such grandeur.

“At first view, one is filled with profound admiration, and cannot but ask what has become of this powerful race, so civilised, so enlightened, the authors of these gigantic works?” Mouhot wrote of the sprawling jungle site. He speculated that Angkor was built by ancient Greeks or Egyptians. In France, Newitz explains, his visit was hailed as a “discovery”.

“Lost city stories became so popular in the modern era – starting in the 19th Century or the 18th Century – because they were really good ways of disguising colonialism,” Newitz said. “It allows you to justify all kinds of colonial incursions. To say ‘this is not a civilisation that’s doing well on its own. And the evidence we see from this is that they’ve fallen away from some great, mysterious lost past.'”

Finding lost cities and civilisations was an obsession for some European explorers and colonisers. Their frenzy was fuelled, in part, by a quest for history’s most famous lost city: the island nation of Atlantis, which first appeared in Plato’s writing. His fictional Atlantis thrived before moral decline brought divine punishment. The philosopher’s contemporaries would have recognised the story as an allegory, said ancient historian Greg Woolf, author of The Life and Death of Ancient Cities: A Natural History.

“Telling a myth to illustrate some greater truth was widely understood,” Woolf said. “I don’t think that anyone seriously believed [Atlantis] existed, but it was a convenient myth.” When Plato’s writing about Atlantis was distributed in modern translations, however, it found a more credulous audience.

“People were reading this at exactly the same time as people are founding colonies in the New World,” explained classicist Edith Hall in a recent interview with BBC’s History Extra Podcast. Misunderstanding Plato’s work, many read the allegorical tale literally, Hall said. “It blew their minds. Everyone said it has to be in America.”

That’s what happened in Cahokia, an ancient metropolis located near the modern-day US city of St Louis. Towering earthen mounds there rival the Egyptian pyramids in height, and at Cahokia’s peak in 1050 AD, the city was bigger than Paris. European newcomers would find it hard to take in.

“Travellers and adventurers would tell themselves all kinds of crazy stories, like it must have been ancient Egyptians who came here to build these,” Newitz said. It was a myth that served to justify stealing Native lands widely described as “empty”, she explained. Meanwhile, as in Angkor, the descendants of Cahokia’s builders were dismissed as incapable of such projects.

Tales of lost cities can hide other truths, too, Newitz writes, such as the ways ancient people reinvented themselves when they left a place behind. Disaster and collapse are often presented as the end of the story, but in Pompeii and Çatalhöyük, Newitz finds the glimmer of new beginnings amid social upheaval.

After superheated volcanic gas turned Pompeii into a graveyard in 79 AD, traumatised Pompeiians at once began rebuilding new lives in nearby Naples and Cumae. Citing the work of classicist Steven Tuck, Newitz relates that many refugees known to historians had names that marked them as liberti, freed slaves. While Roman naming conventions were often conservative, keeping the same names generation after generation, Tuck observed an interesting pattern among Pompeiian refugee families. Shedding their old, liberti names, some opted to call their children after the new places they’d arrived in, such as the busy harbour town of Puteoli. There, some newly arrived families named their sons Puteolanus.

It’s like moving to London from a refugee camp and calling your kid “The Londoner”, Tuck explained to me via email. “The relocation gave them this opportunity and they took it.”

And in the declining cities themselves, Newitz presents relatable people vivid with agency, not ancients held at the whim of history. That’s what she sees in the remains of Çatalhöyük, a Neolithic settlement that flourished 9,000 years ago on the Konya Plain in central Turkey.

Homes there are pressed together like cells in a honeycomb, she wrote in her book, with paths veering over rooftops and entryways dropping through ceilings. Warm evenings would find residents gathered on their roofs, making meals and crafts together. But for all the creative ferment of city life, it’s a trade-off. Over time, it just got harder to stay in Çatalhöyük: the climate became less favourable and social tensions grew.

While many stories about lost cities seem fuzzy and mythical, Newitz pictures the abandonment of places like Çatalhöyük as the result of a well-reasoned process. Over time, the people of Çatalhöyük simply chose to return to more rural places, a process familiar to any city-dweller today who has wistfully scrolled through real estate listings conjuring country life.

“We’re going to go look for a better place and try it again, try a new experiment, try to build differently, try to live differently,” Newitz said, evoking conversations that may have taken place around Neolithic hearths. Families departed one by one, until finally, Çatalhöyük was empty.

But when inhabitants left, each took what mattered most to them. Art, ideas and material culture radiated across the Konya Plain as families made new lives away from the dense settlement.

While Cahokia and many other cities may be abandoned, in an important sense, they’re not lost to us at all. “We still have all these cultural memories of where we’ve been,” Newitz said. “It’s continuity all the way down.”