Taking to Instagram Live, the singing contestant opens up about how she wishes her time on the show showcases her voice and skills as a performer instead of her ’embarrassing’ moment.

AceShowbiz –
Funke Lagoke struggled to make peace with how she was portrayed on “American Idol“. After the scene of her falling forward onto the stage was aired in the Monday, March 22 episode of the competition series, the singing hopeful got emotional talking about her fear over the embarrassing highlight.

She went on saying, as quoted by Good Housekeeping, “I come with so much more, those that know me know that, and I pray that America and whoever saw this saw that even when we fall in life we’re gonna get back up again, and we’re going to fight for another day.”

Aside from her address via Instagram Live, Funke posted a photo of herself oozing off strong aura in a purple outfit and big golden necklace. ” ‘WE ARE ALL SO MUCH MORE THAN OUR FALL’ – Funmike W Lagoke #IamMoreThanMyFall,” so she captioned the Tuesday, March 23 post.

Friends and fans have since commented on Funke’s Instagram post. “Shoutout to my bestfriend @funkelagoke You sound amazing tonight, Never forget #immorethanmyfall,” one comment read. Another screamed out Funke’s hash-tag, “‘WE ARE MORE THAN OUR FALLS!’ @FUNKELAGOKE. ” 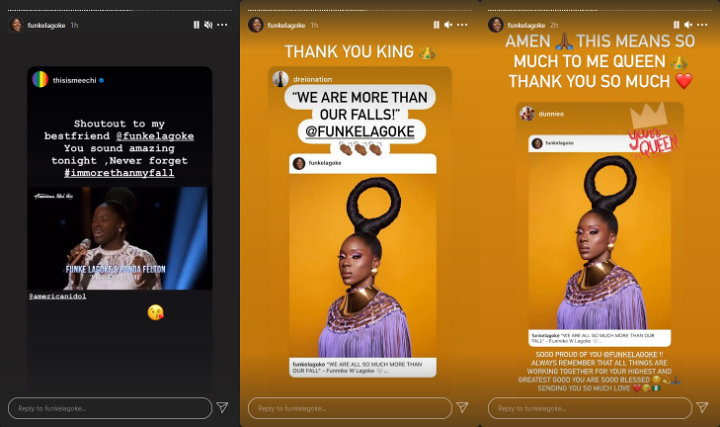 Funke Lagoke showered with encouraging comments by fans and friends.

Funke’s mortifying moment unraveled after she and fellow hopeful Ronda Felton delivered a duet performance of “Tell Him”. When Katy Perry, Luke Bryan and Lionel Richie began to give their feedback to the duo, the 28-year-old suddenly fainted onstage, prompting the judges and producers to rush to her aid. It was later revealed that she got treated for dehydration in the hospital.

A Nearly New Gardener in the UK