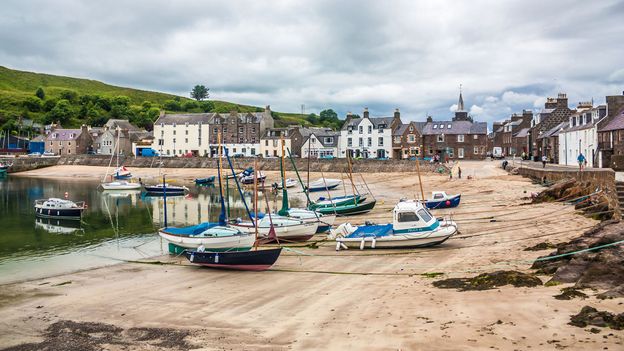 Sheena Blackhall, a celebrated laureate from Garthdee, a suburb south of Aberdeen, was in her element performing the opening stanza of her poem. She was reading “Allt Darrarie”, her lyrical tribute to a stream in the East Grampians of Aberdeenshire, straining each syllable with a gruff rasp. “Now, did that make any sense to you?” she prompted, gently. “Ach, I widnae be surprised if it didn’t.”

Blackhall, the author of more than 1,400 poems, songs, stories and ballads – or “a creative screivin fellow”, as she puts it — is a native speaker of Doric, Scotland’s little-known fourth “language” after English, Gaelic and Scots. Colourful yet guttural, the rural north-east dialect is a subset of vernacular Scots, officially protected by the European Charter for Regional or Minority Languages.

But it is also the one most Scotland natives have problems deciphering. Its ragged tones, cadences and irregular verbs are often mocked as unsophisticated and socially awkward.

This “mither tongue” (mother tongue) is spoken widely from Peterhead in Aberdeenshire to Nairn in the Highlands, where one in two people speak it, according to the University of Aberdeen. And yet it remains a paradox: it was once forbidden to be taught in schools and its currency is such that plenty of Scots do not even know Doric exists.

In simple terms, Scotland is a country divided by common languages. Everyone speaks English, but the farther north you travel, the more Scots, Gaelic and Doric lilts fill the air. Scots is spoken by around a third of the population – with pronunciation, grammar and vocabulary differing from its English-language cousin – while indigenous Gaelic is a Celtic dialect of Irish descent and predominantly the tongue of the Outer Hebrides.

Doric, however, is nudged to the north-east of the map, taking the building blocks of Scots, but rearranging them in its own inimitable manner.

“Doric doesn’t have nearly the same prestige as English or Gaelic and it’s common for people to be embarrassed to speak it publicly,” Blackhall told me. “We’re often accused of linguistic hypocrisy by switching to English to be understood, but this is more linguistic courtesy. I’ve been laughed at too many times to count for speaking Doric and that’s something we’ve all experienced in Aberdeenshire. It is snobbery and it is enough to make me want to give someone a ‘cloot aroon the lug’ (clip around the earhole).”

But it turns out the Doric-speaking community currently have plenty to shout about. For the dialect, maligned for so long, is undergoing a revival.

The green shoots to empower Doric speakers are plentiful. There is a new online TV station. A new undergraduate university degree course. A North-East Scots language board. And an interactive cultural map to help visitors discover Doric’s living oral, cultural and social history.

Creating art, music, literature and TV is about growing the Doric world and there is also a Doric Film Festival, as well as Doric-themed food and drink tours with Bothies and Bannocks, Doric hip hop (courtesy of Aberdeen rapper Jackill), and Aberdeen Art Gallery, a proud champion of Doric culture, which reopened in November 2019 after a four-year restoration project.

Even so, for visitors with an untrained ear, it is feasible to walk up and down Union Street in Aberdeen, admiring its silvery-grey granite steeples and spires, or hunt down the perfect Cullen Skink (smoked haddock soup) in Moray, and wonder if the dialect even existed. At times, this is a language lost inside most homes in the north-east.

Doric speakers aren’t like normal Scots language speakers, so many claim. No, their attachment to their dialect runs deeper. Blackhall describes it as a “tongue to be spoken around home and hearth in local communities”. Chris Foy, CEO of Visit Aberdeenshire, says the local lexicon is “tricky to understand but woven with complexities, glorious variances and brimming with the most wonderful, colourful expressions”. Dr Thomas McKean, director of the University of Aberdeen’s Elphinstone Institute, a centre for the study of ethnology and folklore, says it is “a window into who people in the north-east are”.

You may also be interested in:
• One of the last wild places in Britain
• A language people don’t want to speak
• Scotland’s little-known Highlanders

Indeed, McKean talks of being “captured by Doric ballads” while growing up half a world away in Boston, Massachusetts. Rarely do people talk about their love of the English language this way. “I grew up listening to Doric accents because of my parents’ love of traditional folk music, which is especially strong here,” McKean told me. “That’s what first drew me to the north-east of Scotland – I wanted to see the places and little villages that I knew so well from the songs I loved.”

If you want to shout about your culture, it’s helpful to have a plentiful supply of ballads, poems and folk stories. McKean’s favourites include The Jolly Beggar (“There wis a jolly beggar man, and he wis dressed in green, And he wis seekin’ lodgins in a hoose in Aiberdeen”) and The Bonnie Earl o’ Moray (“Ye heilands and ye lowlands, O whaur hae ye been? They hae slain the Earl o’ Murray, And laid him on the green”). But the academic believes there is a wealth of Doric material, even if its value as a language in public life has been devalued. That’s one reason, he told me, why the Elphinstone Institute has launched the first ever undergraduate academic course in Doric and is in the throes of developing further plans.

Doric’s resurgence mirrors a heightened awareness around preserving indigenous languages. Over the past few years, increasing attempts to halt or reverse the decline of indigenous languages have been made, from First Nations societies in Canada to Saami communities in Norway, Sweden, Finland and Russia. As a result, oral culture is being increasingly safeguarded and becoming more accessible in ways never possible before. The Elphinstone Institute’s Elphinstone Map, for instance, is opening up a whole new world of Doric songs, supernatural tales and folk stories through its interactive multimedia map for visitors.

“Doric is a language that is both a response and interaction to the landscape and history of north-east Scotland,” said McKean. “The way we speak and words we use are such a vital way to connect with our emotions, and when learning another language these deeper thoughts aren’t as accessible to you. We don’t just lose words and sounds – we lose different world views. So Doric is a huge asset for the area, and it adds another dimension to people’s tourism experience.”

Part of the North Germanic language family, Doric shares commonalities with Friesian and Norwegian, but also with Ancient Greece. The name “Doric” was originally applied in Ancient Greece to help distinguish the pure, rural lingo of Doric from the Athenian dialect, and it has sometimes been suggested that the name was adopted by Scots because of the predominantly urban-rural divide between the Lowlands and Highlands.

Another theory is that it stuck because Edinburgh was once nicknamed “Athens of the North” in the early 19th Century due to its neo-classical architecture, and the name “Doric” for this rural dialect was a bit of a snub by Lowlands Scots. But gradually, Doric fell out of use as many places experienced Anglicisation and strong industrial growth, particularly during the oil boom of the 1970s. Indeed, attempts were made 30 years prior to suppress Doric in schools, with a public education report branding it as “not the language of ‘educated’ people anywhere”.

Such linguistic history is documented at the village of Turriff’s Doric Neuk cultural museum, with its beginners’ language classes and book collection, including Blackhall’s Doric version of The Gruffalo and Spikkin Doric, a dictionary of 600 selected words.

But while coronavirus restrictions continue to impact international travel, it is still possible to be transported into the language of Scotland’s north-east to glimpse Doric communities from afar. Doric TV is one such entry point, having accumulated more than 100 videos on its dedicated YouTube channel since launching last March. Its focus lies not in the tales of farmers and fisherfolk, who once worked the fields and coastline of Aberdeenshire, but rather in the vibrant, contemporary stories of today and tomorrow.

“One of the driving forces is for our voices to be heard for centuries to come,” Doric filmmaker Jill McWilliam told me. “I want to capture our way of life, to pass on our cultural history as a digital archive to the next generation. It’s an oral, living, social history that helps connect people and places – and hopefully it lets others feel something of the privilege we have in living where we do.” To her great surprise, viewers have so far tuned in from Australia, New Zealand, South Africa and Canada.

Tune in yourself and you might hear phrases like “Fit like?” (How are you?) and “gie’s a bosie” (give me a hug). Or words such as fair forfochan (exhausted), loon (a boy), quine (a girl), contermaschious (argumentative) or vratch (a nuisance). A personal favourite is foggie bummer (bumble bee). Then, in keeping with the north-east’s damp climate, there are at least 20 words to describe rain (pick from dreich, drookit and smirr, also frequently used in Scots), sough (for the sound of the wind), plooter (for splash in mud), hummel dodies (for fingerless mittens) and curious terms like cappie (ice-cream cone), fooge (play truant) and hallyrackit (disorganised).

Doric terms and stories are everywhere, if one looks hard enough. They can be found in the dramatic coastlines from Balmedie to Boddam. In the paths that meander in and out of Aberdeenshire’s spectacular cliffs. In the clay grounds, tended and nourished into the fertile farmlands found today. This sense of visceral connection with the land is vital in Scotland’s north-east. It is a memory of the people Doric speakers once were, but also a reminder of what they could become again.

Lost in Translation is a BBC Travel series exploring encounters with languages and how they are reflected in a place, people and culture.

Now open: From the Bahamas to the Leaning Tower of Pisa and more

The truth about cruise ships in Venice