Offering fans a look at the bouquet of fuchsia and purple flowers sent by Queen Bey, the ‘Willow’ singer declares on her social media account, ‘Suddenly it’s the best Friday EVER.’

AceShowbiz –
Taylor Swift could not hide her excitement over Beyonce Knowles‘ sweet present. Revealing that the “Crazy in Love” hitmaker has sent her a bouquet of flowers as a gift to celebrate her win at the 2021 Grammys, the “Willow” singer hailed the former the “queen of grace.”

Taking to Instagram Story on Friday, March 19, the 31-year-old tagged Queen Bey as she offered fans a look at the fuchsia and purple flowers she received. In the following post, she put out another snap of the bouquet in addition to a note from the R&B star. “Woke up to flowers from the queen of grace & greatness @beyonce and suddenly it’s the best Friday EVER,” she first gushed.

Taylor went on to rave, “Thank you B and congratulations on your epic achievement Sunday night!!” She added that her cat “Olivia likes [the flowers] too.” For the handwritten note from the R&B star, it read, “Taylor, Congratulations on your Grammy. It was great seeing you on Sunday night. Thank you for always being so supportive. Sending love to you & your family. B.” 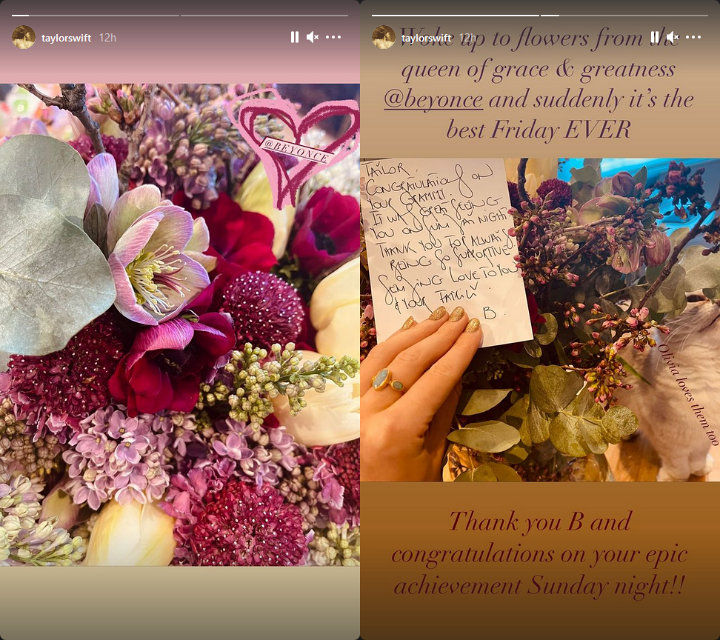 At the 2021 Grammys which took place on Sunday, March 14, Taylor made history by becoming the first female artist to win her third Album of the Year trophy. In her acceptance speech, the “Cardigan” songstress gave credit to boyfriend Joe Alwyn, who co-wrote “Exile” and “Betty” with her on “Folklore” album.

“You guys met us in this imaginary world that we created, and we can’t tell you how honored we are forever by this,” she further stated. “Thank you so much, and thank you to the Recording Academy.” She concluded her speech by saying, “We will never forget that you did this for us. Thank you so much.”

Beyonce, meanwhile, made her own history by becoming the artist who won most Grammys with a total 28 wins.