Getting into the St. Patrick’s Day spirit, the ‘Deadpool’ star additionally shares with his followers that he invented a new Lantern’s Light cocktail using his Aviation gin brand for the occasion.

AceShowbiz –
Ryan Reynolds got into the St. Patrick’s Day spirit on Wednesday, March 17 by watching his 2011 superhero movie “Green Lantern” for the first time – and tweeting his commentary.

The “Deadpool” star also invented a new Lantern’s Light cocktail – made with his Aviation gin brand – as he took in the movie.

“It’s apparently the only f**king movie in existence that’s not streaming anywhere so you’re SOL [s**t out of luck] if you want to watch along,” Ryan shared with his fans ahead of his private screening. “But I’m going deep. #GinnerAndAMovie #AviationGin.” 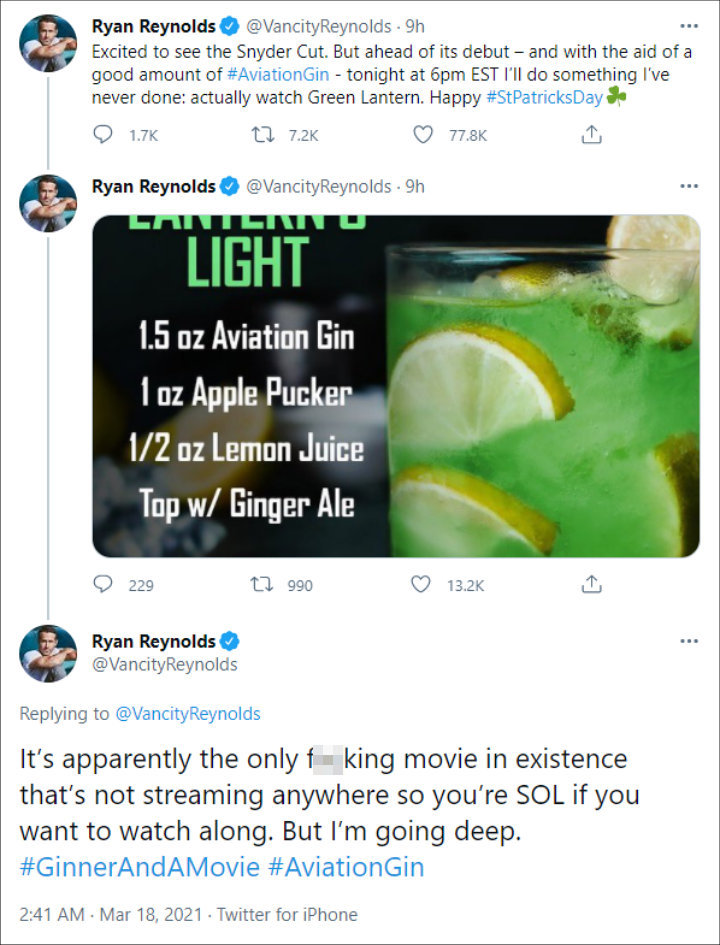 He added, “I only ever read my parts of the script so this is genuinely exciting for me to watch… [the] protagonist seems reckless but likable”.

His tweets continued with, “I swear I’m drinking to Grammy winner and international ambassador of joy, @TaikaWaititi. Not to numb any pain I might be in,” before he noted his now-wife, Blake Lively, is in the film.

Ryan’s nuggets included, “Oh boy. Tragic childhood flashback sequence killing a beloved parent. Designed to instill a level of depth and hard fought empathy for our hero. Disney perfected this move”, “Do you have any idea how weird it is to act while being attacked by invisible space energy?” and, “There’s a lot of heavy hitters in the movie. Not always used in the right way… but still… heavy hitters.”

He also dished out compliments to his co-stars, stating, “Love Stanley Tucci“, “Angela Bassett is stunning. Period,” and “Goddamn I miss Michael Clarke Duncan.” And he posted video of himself sipping his Lantern’s Light while wearing his character’s prop ring.

Will Smith and Antoine Fuqua Pull ‘Emancipation’ Filming From Georgia to…