Rowan Blanchard Is a Little Different Than You Might Remember

Rowan Blanchard was woke before we even knew what being awake meant. By the age of 13, the bubbly actress was a keynote speaker at UN Women’s HeForShe conference. In 2014, she openly discussed her struggles with depression, creating a public discourse around destigmatizing mental illness, and in 2017, she spoke at the Women’s March in L.A. She spent the better part of her teens using her social platform to advocate for the LGBTQ+ community and rally for intersectional feminism, and to put things simply, she became the de facto face of youth activism in the late 2010s. With every tweet, she strayed further from the Disney box that propped her up. But as she enters adulthood, Blanchard is looking to reconstruct that box, to some degree, in the form of setting boundaries—and asserting herself on her own terms.

A longtime friend of H&M, Blanchard is using her time in quarantine to help launch the brand’s new collaboration with Simone Rocha. In celebration of the collection (much of which is sold out worldwide), and in lieu of an in-person party, they created a digital experience with British painter Faye Wei Wei that offers an AR experience of the collection and features a diverse cast of artists, including Blanchard herself. 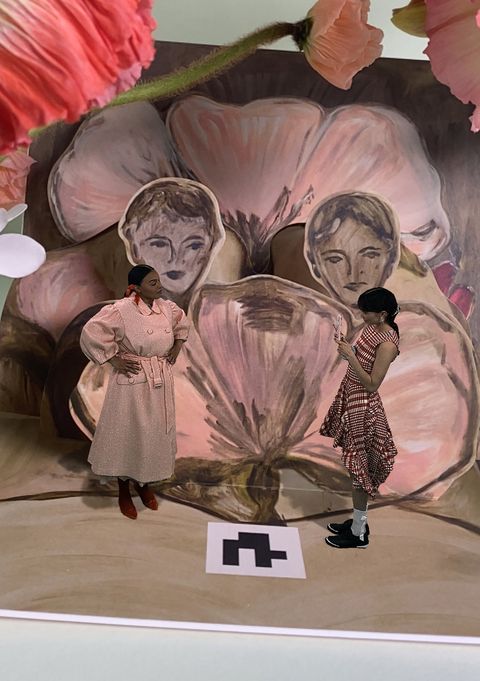 The digital experience is a virtual pop-up book, using AR technology to let see all your faves, including Kaia Gerber, Paloma Elsesser, and Kelsey Lu, trying on the H&M x Simone Rocha collection.

Since her early years of social advocacy, Blanchard’s sunshine-y positivity as the star of Disney Channel’s Girl Meets World has mellowed. We watched her grow up before our eyes, but we forgot what happens during that process: She grew up. Her current Instagram feed is a stark contrast from her days as a child actor—sometimes mullet-wearing, often corseted, occasionally rolling in mud or posing for steamy selfies. She hasn’t lost the zeal nor the vocabulary she wielded when she spoke in front of the United Nations; she simply took those conversations behind closed doors and now wears vintage Vivienne Westwood.

We caught up with Blanchard to discuss how she navigates modern-day activism, embracing her own sexuality, and working with H&M x Simone Rocha.

What made you want to partner with H&M and Simone Rocha?

I’ve been a really big fan of Simone Rocha since I started accessing fashion and understanding what kinds of clothes made me feel like they bridged storybooks—like Alice In Wonderland—into high fashion. I’ve partnered with H&M a lot before and that’s always been wonderful, so connecting with them and Simone just seems like such a cool opportunity. I love how wearing these clothes makes me feel very magical. Anything that makes me feel creative, I really appreciate.

A lot of the collection has already sold out. Is there an item in your fashion history you regret not buying?

No. My problem is I buy everything I want and I need to stop. The other day I went into like this little store and I regretted not buying these rainbow angel wings. I know where they are though. I’m probably going to go get them today.

You’ve mentioned before that Britney Spears is a source of inspiration for you. Have you seen the documentary?

I actually have not. I think I’m just inspired my Britney Spears. I love her and I’m really grateful for her.

I think that I, on a much smaller scale, relate to being sexualized my whole life. I relate to being a child actor. I also relate to everyone calling you crazy. I have so much love in my heart for her in the same way I hope I have forgiveness for myself. I have been avoiding [the documentary] because I know it’s going to bring up stuff for me.

How has that led you to embrace your own sexuality?

I have come into a part of my life where I want to. I know I can’t ever own my image or own myself for a number of reasons, but a lot of it has to do with working as a kid and always being in the spotlight and not having a lot of consent involved in how people talk about me or look at me or sexualize me. Now that I’ve kind of stepped into my adulthood in the past couple of years, I think it’s natural for me to want to have some authority over that. Because people are going to sexualize me no matter what I do. I’ve found that it’s easier for me to wrap my head around it if I have control or an awareness of it, if I’m in on the joke.

Is there specific outfit or item of clothing that makes you feel empowered and most in control?

I honestly love all clothes. I have a clothes hoarding problem. I have always been obsessed with fashion. With Simone, I used to save her collections when I was like 11, 12, and make poster boards. Fashion is just such an extravagant, exciting, fun language to me. Clothes make me so happy, and that’s the whole fucking point of them. I think Simone really gets that.

Has your style changed at all during lockdown?

I’m in a different country where I don’t know anyone. I am pretty much home all day, so I will change my outfit six times during the day for different FaceTime dates with people. Because there are less opportunities to wear clothes in places you’ll be seen, it makes me want to wear all my clothes at once. Like, I want to wear my body chain with my belt, with my garter, with my thigh-highs, with my miniskirt, with my sweater, with my necklaces. I just want to wear everything.

I mean, when I’m working I wear sweat pants and a tank top all day long, but if I’m trying to keep the energy light, I will change my outfit a lot.

Are there any other forms of art, whether it’s music or books or anything you’ve engaged with recently, that moved you?

I just started reading Sleepless Nights by Elizabeth Hardwick last night that was pretty beautiful. What else have I been doing? I’ve started this, like, workout journey that I’ve never done in my life I’ve been doing pole dancing classes, which has been really nice and rewarding. I have so much respect for dancers and I have so much respect for the strength, and I have the most respect for anybody who knows how to objectify themselves. Pole dancing a really amazing combination of all of those art forms.

You were so young when you became one of the faces of youth activis, five or so years ago. How has your relationship to activism politics changed since then? Obviously, the world is a lot different now.

Yeah, I think it’s pretty visible that I stopped myself from speaking out online. My life now is actually about how I’m dealing with all of these things I said I cared about when I was fifteen. I have a really strong community and I feel like I’m actually just trying to show up for them in real life rather than show up online, to make comments so that people think I’m not being passive.

We just have to move past this point where we translate everything online. I realized that I spent so much time on the internet answering to people. I think it’s really important for me now to practice it in my real life, to show up for your community, and to find out what access you have that other people in your community don’t. How can you help give them that access? What can you offer? Whether that’s housing or money, what can you do in real life that’s going to make a tangible change on someone? The thing about the internet and what I hated so much about online activism is that it—and I literally hate that word now—it makes these things seem so out of touch and far away. And really like, we can all start by helping our friends on a physical level. This has been drilled into our brains that if we’re not doing it online, then it’s not real or something. So it’s bridged a huge disconnect.

I’ve distanced myself from it. Social media isn’t as important to me. Articulating a message online is not really that important to me. I’ve found it really healthy that my brain is moving away from Instagram and all of these things. It’s more like a visual archive for me now. I got my Twitter completely deleted this year, which I was really excited about. There’s nothing that lets me sleep at night more than knowing that my Twitter doesn’t exist anymore.

I don’t even have that app on my phone.

The Sex Lives of College Girls Is Getting a Season 2

This Basic T-Shirt Is Exactly What I Wanted