The ‘Good Morning Britain’ co-presenter quits the hit breakfast show after it was announced he would be investigated over his insensitive remarks about Meghan Markle’s interview with Oprah Winfery.

AceShowbiz –
Sharon Osbourne and Jameela Jamil have different reactions when it comes to Piers Morgan‘s abrupt exit from “Good Morning Britain“. While the wife of Ozzy Osbourne publicly declared that she stands with the hit breakfast show co-presenter, “The Good Place” actress celebrated his departure.

On Tuesday, March 9, the 68-year-old voiced her support for the British journalist via Twitter. “@piersmorgan I am with you. I stand by you,” she began her tweet. She then went on to point out that he was doing his job. “People forget that you’re paid for your opinion and that you’re just speaking your truth,” she wrote.

Hours after Osbourne put out her post, Jamil took to her own Twitter page to bid farewell to Morgan. She first wrote, “TW: suicide. I almost killed myself a year ago because of Piers Morgan’s relentless campaign of lies and hatred against me last February.”

The British actress went on, “I’m glad I’m still alive today for many reasons.” She continued, “But watching him leave ‘GMB’ today is right up there and has me feeling.” She added a GIF of herself on the red carpet at the 2019 Emmys. 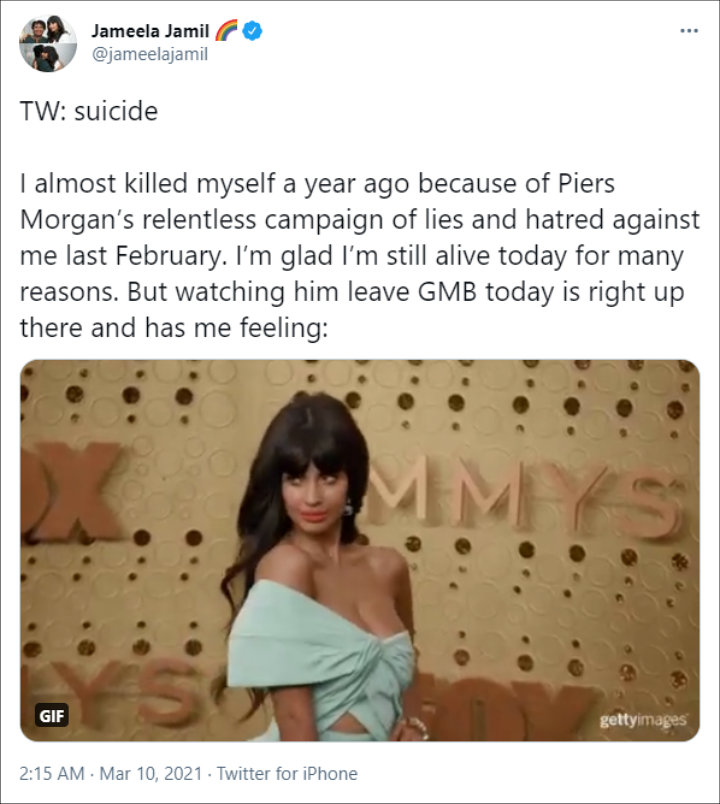 Morgan quit “Good Morning Britain” after it was announced that he would be investigated by U.K.’s media regulator Ofcom over his insensitive remarks about Meghan Markle‘s interview with Oprah Winfrey. Ofcom officials noted that Morgan’s comments about the wife of Prince Harry drew more than 41,000 complaints.

Commenting on Markle’s explosive sit-down, Morgan said in the Monday, March 8 episode of his breakfast show, “I don’t believe a word she says, Meghan Markle. I wouldn’t believe her if she read me a weather report.” He was referring to the former “Suits” actress’ revelations which included confession that she contemplated suicide while living with the British royal family.

Having landed in hot water for his comments, Morgan tried to clarify his statements. “When we talked about this yesterday, I said an all-encompassing thing. I still don’t believe what Meghan Markle says generally in this interview and I have serious concerns about the veracity of a lot of what she said,” he first pointed out on Tuesday.

“But let me just state my position on mental illness and on suicide. These are clearly extremely serious things and should be taken extremely seriously,” he further explained. “And if someone is feeling that way they should get the treatment and the help that they need every time. Every time.”

SZA Seemingly Reacts to Accusations That She Fakes Personal Information