All About Leo Robinton, Emma Watson’s ‘Serious’ Boyfriend of Over a Year

Emma Watson has purposely kept her love life out of the public eye for years, but earlier this week, the Daily Mail reported that Watson was stepping back from acting and has been spending her time with Leo Robinton, her boyfriend of over one year.

It comes after the couple was photographed together in November, where Watson gave a small hint that things were still going strong between her and her California businessman boyfriend. Robinton and Watson were photographed out in London’s Primrose Hill after grabbing coffee. Both wore masks in most photos on the Daily Mail, though at one point, Robinton took his off, as seen below. 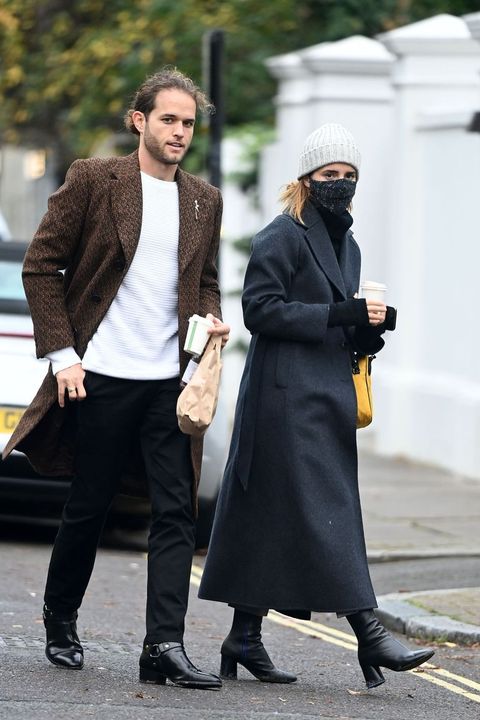 The two were first photographed kissing in London last October, although Robinton wasn’t identified by any outlet until April 2020.

Here, what to know about Robinton and his relationship with Watson.

Watson and Robinton’s relationship became public with a PDA photo in fall 2019.

At the end of October last year, the Daily Mail ran photos of Watson kissing a “mystery man” while out at lunch in London, sparking speculation Watson had a new boyfriend. (You can see them here.)

Watson would go on to describe herself as single in her December 2019 British Vogue issue interview, which was conducted in late summer, seemingly before she met or began seriously dating Robinton.

The actress spoke candidly about turning 30 to the outlet, saying, “I was like, ‘Why does everyone make such a big fuss about turning 30? This is not a big deal…’ Cut to 29, and I’m like, ‘Oh my God, I feel so stressed and anxious. And I realize it’s because there is suddenly this bloody influx of subliminal messaging around. If you have not built a home, if you do not have a husband, if you do not have a baby, and you are turning 30, and you’re not in some incredibly secure, stable place in your career, or you’re still figuring things out…there’s just this incredible amount of anxiety.”

She added then that she was seeing “not one specific person, but I’m going on dates.”

But honestly, she was fine with being single: “I never believed the whole ‘I’m happy single’ spiel,” she said. “I was like, ‘This is totally spiel.’ It took me a long time, but I’m very happy [being single]. I call it being self-partnered.”

Watson hasn’t spoken about her love life since, but it would appear, based off the timeline of the interview, that whatever she and Robinton had going on when they were shot kissing was fairly new.

Watson and Robinton likely didn’t meet on a dating app but rather through friends.

Watson explained to British Vogue that she doesn’t use dating apps, in part because of her celebrity status. “Dating apps are not on the cards for me,” she said. “I’m very lucky in the sense that because I went to university and because I’ve done these other things outside of film, my friends are really good at setting me up. Really good. And what’s really nice is some of my best friends are people I got set up on a date with and it didn’t work out.”

Watson added that initially, she doubted she could make friends with someone she went on a first date with: “I didn’t think it was possible,” she said, “And it really is possible. And it’s actually great.”

Robinton has no social media and reportedly deleted his accounts after pictures of them kissing came out.

Robinton was revealed to be the man Watson was kissing in April 2020 by the Daily Mail. He is believed to be about 31, with a 1989 birthday. According to Daily Mail, when the news became public, Robinton got rid of his Instagram and social media accounts to protect their privacy. The Sun additionally reported that Robinton is a Los Angeles businessman who used to work for a company that specialized in legal cannabis there. He left his role in June 2019, before he met Watson.

Robinton is from a big family and participated with one of his sisters in the 2017 Women’s March.

Robinton is from a big family, with two older sisters (Daisy and Lily), a twin brother named Archer, and an older brother named Charlie. His sister Daisy, a cell and molecular biologist, tweeted a photo of Robinton with her at the Washington D.C. Women’s March in 2017. “Proud of my little bro for trekking across the country to support women’s rights @theresleo #EmpowerWomen #WomensMarchDC,” she wrote.

Robinton and Watson were “serious” in April 2020, according to Daily Mail’s insider.

Not much is really known about Watson and Robinton’s relationship now, the way the couple would prefer it. But an “insider” spoke to the Daily Mail in April about their bond.

“Emma and Leo did everything in their power to keep their relationship private,” that source said at the time—a practice that has seemingly continued.

The source added that Robinton had met Watson’s parents. “Emma introduced Leo to her parents; she was really serious about him,” the source said. “They went for a meal together back in December at The Ivy restaurant in St John’s Wood not long after Emma and Leo first met.”

Robinton and Watson are still going strong in February 2021—and may even be settling down together, according to Daily Mail’s source.

Updates on Watson and Robinton’s relationship remain very rare in 2021, as the two have successfully kept things between them private. But amid Watson’s rep telling Daily Mail that Watson’s acting career is “dormant,” and the actress “is not taking on new commitments,” a source spoke to Daily Mail about what Watson’s life has been like.

“Emma has gone underground; she is settling down with Leo,” that source claimed. “They’re laying low. Maybe she wants a family.” The Daily Mail reported they’ve been living in Los Angeles. Watson, for what it’s worth, has made no statement on her relationship with Robinton. Her social media (Twitter and Instagram) has been inactive since August 2020.

Fausto Puglisi On the Past, Present, and Future of Roberto Cavalli

Becca Cosmetics Is Closing Due To COVID-19 Losses

Tales of Dunk and Egg: What We Know So Far

Jordan Alexander Is in It for the Long Haul

How to Livestream Celine’s Summer 2022 Show