The Canadian star makes it clear that he has no interest in reprising his role as Hal Jordan while responding to a speculation that his appearance is the big surprise in store for the Snyder Cut.

AceShowbiz –
Ryan Reynolds has shut down any hope of seeing him back as Green Lantern. The actor, who has several times poked fun at the commercial and critical failure of his 2011 DC movie, has flat-out denied rumors of his possible cameo as the green-costumed superhero in “Zack Snyder’s Justice League“.

“It’s not me. But what a cool pirate flag to cameo as Hal. Maybe it’s another GL?” the Canadian hunk tweeted on Monday, February 22. Making it clear that he has no interest in reprising his role as Hal Jordan, he added, “But for me, the suit stays in the closet. I mean, computer.” 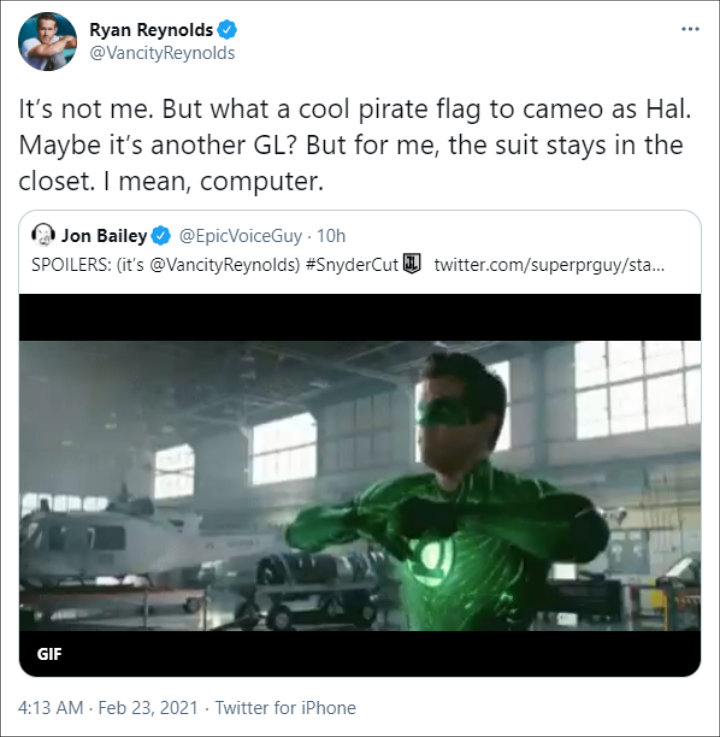 The speculation arose after Vanity Fair reported earlier on Monday that the ending of Zack Snyder’s cut of “Justice League” would include a major cameo. Fans then started suggesting that the big surprise in store could be Reynolds’ appearance as Hal Jordan.

Reynolds portrayed Hal Jordan a.k.a. Green Lantern in the 2011 film directed by Martin Campbell. The movie received mostly negative reviews from critics and underperformed at the box office, grossing $219 million against a production budget of $200 million.

Not a fan of the film either, the 44-year-old actor has mocked the movie over the years, even including jokes about it in his “Deadpool” films. Back in 2013, he expressed that he had “very little interest” in reprising the role in a “Justice League” movie.

“Working on ‘Green Lantern’, I saw how difficult it is make that concept palatable, and how confused it all can be when you don’t really know exactly where you’re going with it or you don’t really know how to access that world properly – that world comic book fans have been accessing for decades and falling in love with,” he explained at the time. “So at this point I have very little interest in joining that kind of world. But, you know, a great script and a good director can always turn that around.”

In his version of “Justice League”, Snyder filmed several minutes of new footage with Ben Affleck (Batman), Ray Fisher (Cyborg) and Amber Heard (Mera). His cut will also include Joker (Jared Leto) and Deathstroke (Joe Manganiello) scenes. It will be released as a four-hour movie on HBO Max on March 18.