Shortly after producers announced that the hit sitcom will wrap up with season 8, the Bonnie Plunkett depicter shares a lengthy message in which she called the show one of the ‘great honors’ of her life.

AceShowbiz –
Actress Allison Janney is heartbroken over the shock cancellation of her hit U.S. sitcom “Mom“, calling her role in the addiction-themed show one of the “great honours” of her life.

Show producers Chuck Lorre, Gemma Baker, and Nick Bakay and president of CBS Entertainment Kelly Kahl announced the sad news on Wednesday, February 17, revealing the show will end on May 6, at the end of its current eighth season, eight months after the sudden departure of series star Anna Faris, who abruptly left the programme in September 2020, days before its now-final season went into production, reportedly blindsiding showrunners and her castmates.

And now stunned Allison, who told chat show host Ellen DeGeneres on Tuesday that she and her co-stars planned to “keep telling the stories as long as we can”, has broken her silence following the cancellation news with a lengthy post on Instagram on.

“Getting to be part of MOM these past 8 years… showing the laughter, love and hope that can come with recovery, has been one of the great honors of my life,” she wrote, alongside a screenshot of the cancellation news in The Hollywood Reporter.

“I want to thank Chuck Lorre, Gemma Baker, Nick Bakay, and all the writers…,” she continued, listing 22 names, “for giving us these wonderfully flawed and lovable characters to bring to life. I miss seeing all of your faces.”

⁣ “And these amazingly talented actors I got to act with everyday!!! Mimi, Jaime, Kristen, Beth, and the coolest man on the planet, Bill Fichtner. and of course Anna Faris. ⁣ Jamie Widdoes [director] for your patience and dedication and enormous talent steering this ship! ⁣ Our entire crew, your laughter and love and dedication to this show has made it a joy to come to work.”

“And last but not least all of our extraordinary fans!!! Thank you for all of your support over the years,” she concluded her post with a praying hands emoji.

There is hope that another network might snap up the series and fans have launched a petition to save the show, which co-stars Mimi Kennedy and Kristen Johnston are backing online.

Kennedy, who plays Marjorie on the show, has shared a link to the Change.org petition on Instagram and wrote, “The audience has a voice and shouldn’t be be ignored.” 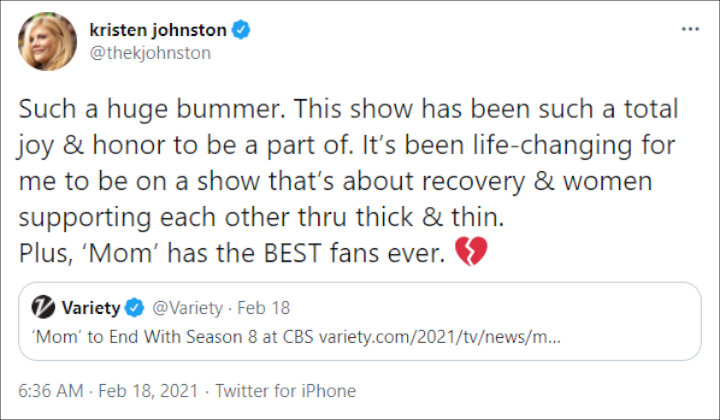 And Johnston, who plays recovering addict Tammy Diffendor, has also shared her disappointment, tweeting, “Such a huge bummer. This show has been such a total joy & honor to be a part of. It’s been life-changing for me to be on a show that’s about recovery & women supporting each other thru thick & thin. Plus, ‘Mom’ has the BEST fans ever.”

Inspired By Tealive, These M’sians Create DIY Boba Kits That Can Be Made As Fast As Milo