The show announces the heartbreaking passing of Smith, who was also known as ‘Alex’s Last Great Champion’, on Twitter, calling him ‘kind, funny and absolutely brilliant.’

AceShowbiz –
A five-time “Jeopardy!” winner has died “unexpectedly.” Brayden Smith, who was also known as “Alex’s Last Great Champion”, passed away at the age of 24 on Friday, February 5 in Las Vegas. His death was confirmed by his mother, Debbie Smith.

On Friday morning, February 12, Debbie took Twitter to share a picture of her late son. She tweeted, “We are heartbroken to share that our dear Brayden Smith recently passed away unexpectedly. We are so grateful that Brayden was able to live out his dream on @jeopardy.”

In the wake of Brayden’s passing, “Jeopardy!” offered condolences via Twitter by replying to his mother’s tweet. “The ‘JEOPARDY!’ family is heartbroken by the tragic loss of Brayden Smith. He was kind, funny and absolutely brilliant. Our deepest condolences go out to Brayden’s family. He will be missed,” so read the message. 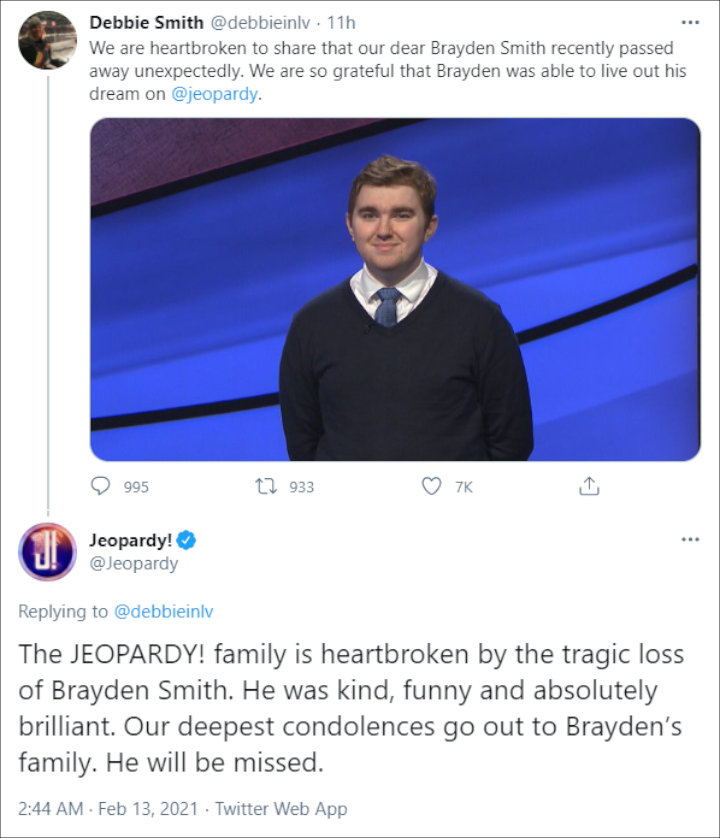 Brayden’s final appearance on “Jeopardy!” was in Alex Trebek‘s final episodes, which aired in mid-December 2020 and early January 2021. He won $117,798 on the game show. In January, he opened up about his experience on the program. “It’s been a whirlwind,” he admitted.

The late champion went on to tell the show’s correspondent Sarah Whitcomb Foss, “Thinking back, a few months, as I wait for my shows to air – it’s been really – I’ve been on pins and needles, I guess. I’m glad we were able to do it, and I’m glad I was able to show what I was capable of.”

“I just wanted to stay there as long as possible. It’s really a great feeling to be on the set. To be around smart, nice, warm people,” he added. “And to be around Alex… who has been a mainstay of my life. To finally be on stage with somebody that I’ve seen five nights a week. Every week. For over a decade – was really a dream come true.”

According to his obituary in The Las Vegas Review-Journal, Brayden was survived by his family including mother Debbie, father Scott, brothers Bryce, Brock and Brody, as well as his grandparents, aunt, uncle and his cousins. His cause of death has yet to be revealed.

‘Ginny and Georgia’ Slammed for Misogynistic Reference to Taylor Swift