‘Waffles + Mochi’ is set to follow the journey of two puppets, Waffles and Mochi, as they try to become chefs with the former First Lady playing a ‘whimsical supermarket’ owner.

AceShowbiz –
Michelle Obama is set to launch a cooking show on Netflix. Titled “Waffles + Mochi”, the upcoming kid-centric show will feature the former First Lady as a “whimsical supermarket” owner as well as two puppets named Waffles and Mochi.

“Waffles + Mochi” is set to follow the puppets’ journey as they try to become chefs. The show’s theme is described to be closely aligning with Michelle’s “Let’s Move!” public health campaign that was aimed at curbing childhood obesity. The wife of Barack Obama has been trying to help families get access to healthy, affordable foods and increase their physical activities with her initiatives.

Netflix said in a statement, “With the help of friendly new faces like the supermarket owner, Mrs. Obama, and a magical flying shopping cart as their guide, Waffles and Mochi blast off on global ingredient missions, traveling to kitchens, restaurants, farms and homes all over the world, cooking up recipes with everyday ingredients alongside renowned chefs, home cooks, kids and celebrities.”

“I’m beyond thrilled to share that on March 16, I’ll be launching a new show on @Netflix called Waffles + Mochi! I’m excited for families and children everywhere to join us on our adventures as we discover, cook, and eat delicious food from all over the world,” Michelle shared her excitement on Twitter on Tuesday, February 9.

She went on saying on the blue bird app, “I’m also excited to work with @PHAnews to help kids build healthy habits and help families in need cook with fresh ingredients together at home. I hope you’ll join us by watching on March 16! #WafflesAndMochi.” 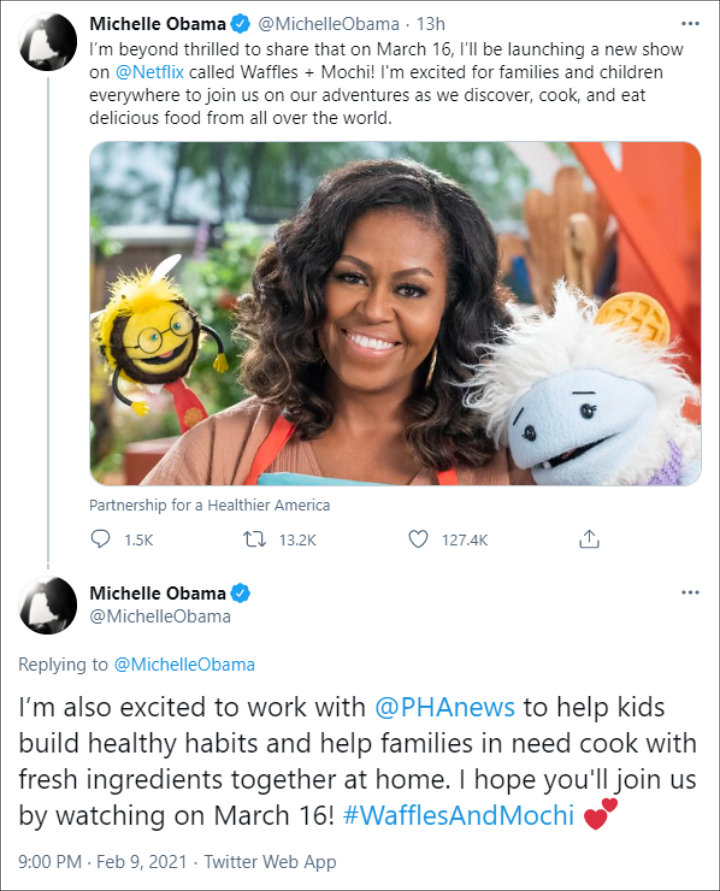 Michelle Obama shared her excitement over the new cooking show.

“Waffles + Mochi” joins Michelle’s many media ventures that include her “Becoming” documentary and “The Michelle Obama Podcast”, the latter of which was launched on Spotify in 2020. There seems to be more to come as the Obamas’ Higher Ground Productions has signed a multi-year production deal with Netflix.

“Waffles + Mochi” is scheduled to be available for streaming on Netflix starting March 16.