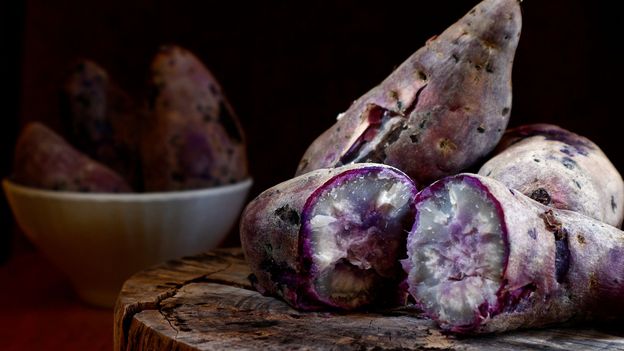 The seller pointed to the large canisters sitting on his vibrantly painted cart and asked me my flavour preference. On that humid afternoon in Manila, nothing sounded better than a heaping bowl of sorbetes, a variety of Filipino ice cream traditionally made with creamy milk from the carabao, a species of water buffalo. But while I had originally been allured by the thought of refreshing mango, I quickly became intrigued by the neighbouring canister’s vibrant purple hue.

“Ube is a popular choice,” said the vendor, noticing my preoccupation.

Abandoning all notions of mango, I turned my attention to the violet concoction the vendor was now scooping into a bowl. The first mouthful proved what sight had already suspected: the ice cream was denser than any frozen dessert I’d ever tasted, rich and full-bodied, with an earthiness that juxtaposed brilliantly with the sweetness. That subtle earthy flavour derived from ube, a purple yam indigenous to the Philippines. This lovely lilac-fleshed tuber has long been one of the country’s most beloved foods, and though chefs around the world have recently begun adopting it for use in all manner of desserts, ube is much more than an ingredient in the Philippines; it reflects the nation’s complex history.

Soon after my memorable taste of ube sorbetes, I started spotting that vivid purple shade in all varieties of Filipino dishes around the city. The traditionally brown-hued champorado, a chocolate rice porridge that is one of the country’s best-loved breakfasts, becomes bright violet when the tuber supplies its pigment. Steamed sapin-sapin, a classic Filipino glutinous-rice-and-coconut-milk dish meaning “layers”, derives its purple sheet from ube. The lavender chiffon and decadent frosting of ube-macapuno sponge cake marries the earthy quality of the root vegetable with the creamy texture of young coconut’s gelatinous flesh.

And yet, amid this wide-ranging selection of ornate purple confections, one of the most popular ways to serve ube in the Philippines remains ostensibly simple. Ube halaya, a creamy yam-based jam that’s one of the Philippines’ most classic desserts, is customarily prepared by boiling and mashing the tubers, then stirring them in a saucepan with sweetened milk and butter until the mixture becomes a thick paste. Paired with a mug of hot chocolate or salabat, Filipino-style ginger tea, the treat makes for a decadent snack. Or, the mixture can be stuffed inside, served atop or incorporated into all varieties of Filipino sweets.

You may also be interested in:
• Sichuan peppercorn: A Chinese spice so hot it cools
• What the Philippines can teach us about giving
• How a South Korean comfort food went global

While ube halaya originally featured fresh carabao’s milk, today’s cooks often forego the ingredient in favour of other dairy that is easier to obtain and work with.

“With the arrival of the Americans [in 1898], condensed milk and evaporated milk became more popular. This speeded-up the process” – and also made the ube halaya sweeter than it traditionally was, explained Jeremy Villanueva, executive chef at Romulo Café, an award-winning Filipino restaurant in London.

The modern-day evolution of ube halaya serves as a reminder of how many occupiers – including Spain, Japan and the United States – have laid claim to the Philippines, and how deeply those eras still impact its food today. The many international influences that have shaped the nation’s cultural and culinary identity is perhaps best embodied in a bowl of halo-halo, meaning “mix-mix” in Tagalog.

I enjoyed several interpretations of this crushed-ice dessert around Manila, and in most, ube halaya was the treat that topped off a rainbow hodgepodge of multicultural components: leche flan; fresh jackfruit; tapioca pearls; a drizzle of evaporated milk; a sprinkling of cereal. Ube halaya also appeared in the ensaymada pastries I sampled, streaks of lilac weaving through the fluffy brioche that was adopted here during Spain’s three-and-a-half century rule over the islands. Throughout history, Filipinos took different influences and adapted them to suit their tastes, creating new and distinct foods in the process.

Because ube is less sweet and more dense than most sweet potato and yam varieties, it has long been a staple ingredient in Filipino kitchens. The vegetable’s starchy texture easily absorbs different aromas – the richness of cream, for example, or the woodiness of coconut – while also subtly offering its own unique nuttiness.

“That’s why I think there’s a lot of different [ube] experimentation,” said Villanueva. “It can be paired with other things and create other products based on its flavour.”

The Filipino tuber has quickly journeyed around the world

That experimentation has grown to colossal heights in recent years, with ube lending its colouring to sweets all around the world and populating social media feeds with images of strikingly violet pancakes, cheesecakes, doughnuts and milkshakes. The Filipino tuber has quickly journeyed around the world, finding its way into coffee cake in California, macarons in Australia and lager in China.

“It creates interest because it’s an unusual colour to have in food,” said Villanueva. “I think the trend is driven by a lot of Instagram posts.”

Though the purple hue is certainly eye-catching, emphasising colour in food is not an uncommon practice in the Philippines. According to Rowena Dumlao-Giardina, a food writer born and raised in the Philippines, while many savoury Filipino dishes are brown, sweets are often eclectic in colour. She notes that mango’s yellow flesh adds a bright sunniness to sweet courses, and juice from pandan leaves – when blended and strained – imparts a vibrant green tint and refreshing aroma to various desserts.

Colour is even used in meat dishes to differentiate sweeter seasonings from their saltier counterparts.

“Tocino is a sweet pork,” said Gil Payumo, Filipino-American chef and co-founder of the San Francisco food truck Señor Sisig. “We add red food colouring to highlight that it is a sweet meat compared to more savoury sisig [a chopped pork dish] or barbecue.”

Such pigments on a plate do grab your attention, but to most Filipinos, ube’s vibrant shade is far secondary to its cultural connotations.

“Because of the effort to make ube halaya, it’s associated with special occasions and celebrations,” said Villanueva.

For many Filipinos, the vegetable, especially when prepared as ube halaya, is imbued with fond memories. Making this cherished dessert by hand is a labour of love, requiring constant stirring to prevent the mixture from sticking and burning.

“I remember during Christmas, instead of asking for material things from my maternal grandmother, we would just ask her to make some ube halaya as Christmas gifts for us,” recalled Dumlao-Giardina, who says seeing other cultures adopt the Filipino tuber has been nostalgic – an experience that Villanueva shares.

There’s a soul to its consumption. It’s part of the culture, it’s part of our heritage

“For me as a Filipino, it’s a point of pride and a compliment that other people from other cultures can find interest in these things,” Villanueva said.

Reflecting on the recent social media stardom of ube’s alluring hue, Villanueva hopes the hubbub won’t drown out the important place the ingredient occupies in the hearts and palates of Filipinos around the world.

“It’s not just a gimmick of something purple. There’s a soul to its consumption. It’s part of the culture, it’s part of our heritage,” he explained. “Ube for me is not a fad. Even if it passes, it will still be part of our culture.”

According to Payumo, in order for that culture to be communicated through food, chefs and cooks should take care to attach ingredients’ legacies to the creations being served. “As long as you’re educated about this product or this dish, by all means, everyone should be trying [ube],” he said.

Greater education could certainly play a part in popularising Filipino cuisine overseas. While many people around the world can pinpoint at least one dish from nearby countries such as Japan, China and Thailand, some Filipino chefs feel their nation’s complicated history of foreign influences has made their cuisine less identifiable to diners outside the Philippines. The nation’s incredible diversity – more than 100 ethnic groups, each with different languages and cultures, call the islands home – makes its gastronomy even more difficult to pin down.

“How you would define Filipino food is not as easy as other cuisines with their hallmark dishes,” explained Villanueva. “I think this is part of the reason why it’s been overlooked, or why it becomes challenging for someone that’s outside of the culture to recognise.”

Payumo hopes ube’s increasing exposure will open the door for more people to explore and delight in Filipino cuisine. “I look at it like a gateway,” he said. “This is the gateway to Filipino food that kind of helps you… understand what the flavours are.”

As ube continues to be incorporated and adapted to international tastes, this time it’s Filipinos who are sharing their culinary culture with others. “In the same way our culture took in influences and expressed ourselves with it, I would imagine that other cultures and people from other backgrounds will use our influence and express themselves in their own way,” said Villanueva.

Invigorated by the taste of ube in traditional Filipino desserts, I returned home to California and hunted for the tuber in in my hometown. A short drive produced brioche doughnuts filled with ube cream, purple cupcakes topped with ube flan and ube yema cake (a Filipino chiffon cake starring a creamy custard filling). Like the sorbetes that captivated me in Manila, these sweets were stunning to behold. But it’s the tuber’s subtle vanilla scent, coupled with a nuttiness reminiscent of pistachio, that made those desserts memorable – and makes ube stand out among root vegetables.

And though one might initially judge ube by its purple cover, one bite will surely dismiss any fixation on its hue. It’s the taste that will keep you returning for more.

The 10 Best Non-Alcoholic Beers With Tons of Flavor, According to Editors