The advent of the solitary vice 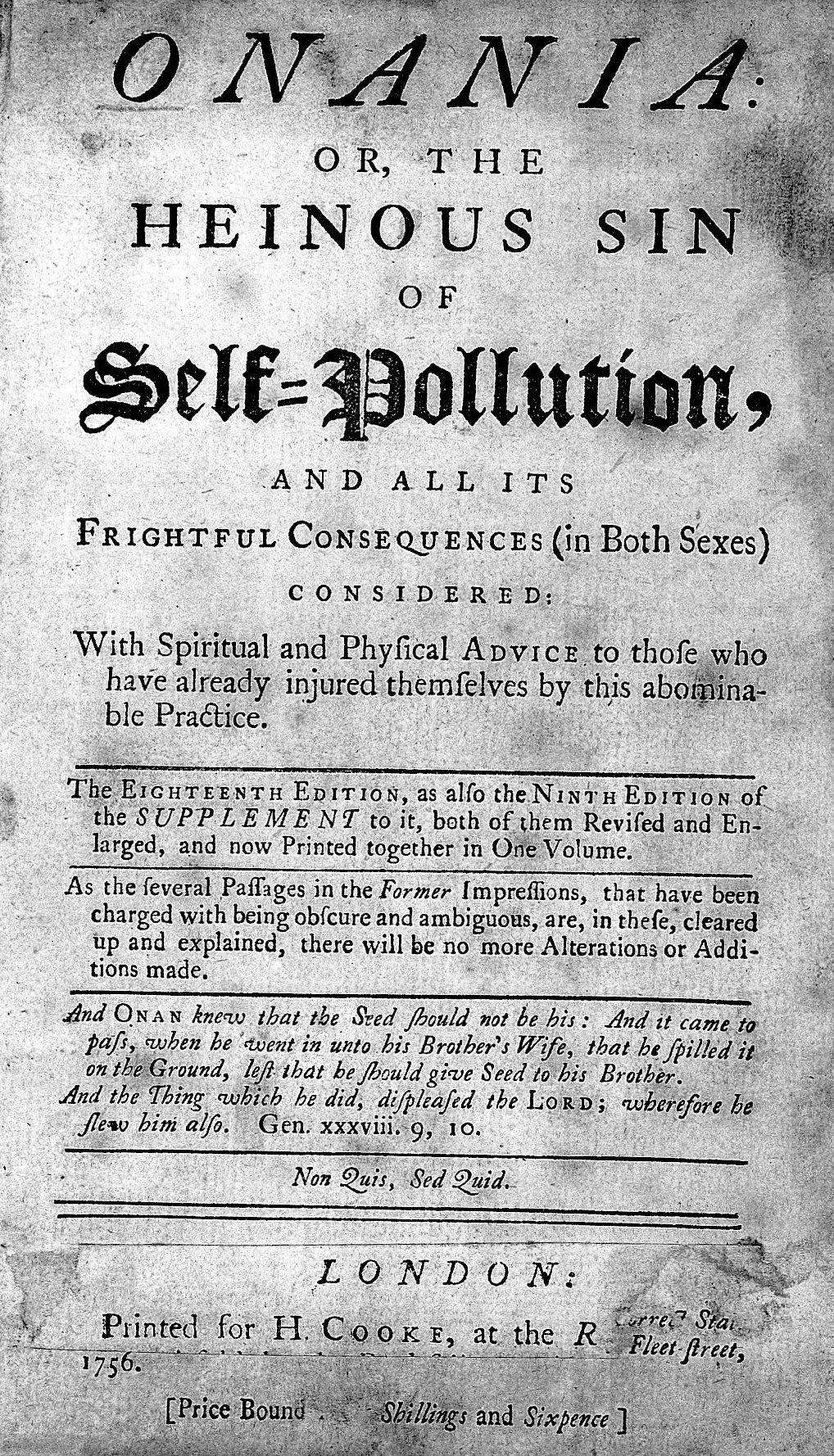 Onania: or, the Heinous sin of Self-Pollution, published in 1756. Image from Wellcome Library, London. Wellcome Images CC BY 4.0 via Wikimedia Commons.

‘In or around 1712’, onanism was loosed upon the world. The problem that had been so long ignored but that would come to play such a large role in the modern Western understanding of self and sexuality was this: ‘That unnatural Practice by which persons of either sex may defile their own bodies, without the Assistance of others. Whilst yielding to filthy imagination, they endeavor to imitate and procure for themselves that Sensation, which God has ordered to attend the Carnal Commerce of the two sexes for the Continuance of our Species’.

In her review of my Solitary Sex: A Cultural History of Masturbation, (London Review of Books, 6 May 2004) Barbara Taylor argued that the book was essentially a history, writ on the body, of a new sort of self in society: ‘the sexuality of the modern self’ I called it. ‘Laqueur’, she notes, ‘presumes a caesura between the modern and the pre-modern. The modern masturbator stands on the near side of a cultural divide whose far side is a world where the moral hazards of sex were not those of rampant individualism but violations of a hierarchical, providential order.’ In other words, a new pathology of solitude, a new and powerful engine of shame was born and flourished as a bulwark against rampant individualism and the hazards of unmoored moral autonomy. The roots of Onanism in my account, Taylor argues, lie in ‘the predicaments of secularized subjectivity’

Taylor accepts these claims but argues, rightly, that it does not fully account for the novel shamefulness of Onanism, the new pathology of solitude. The shame, she continues, is rooted in the Christian notion of concupiscence, the idea most profoundly articulated by Augustine, that the estrangement of the soul from God is marked in the flesh by the autonomy of sexual desire, and, speaking as he does from a male perspective, signaled by the unruliness of the sexual organs. Adam’s shame at his nakedness came from an unwilled erection. (For Augustine the key is unwilled and unwillable.  In a letter to Paulinus of Nola that he wrote in his old age, he said that his present impotence was just as much a sign of concupiscence as the erections of his youth.

If we think of the new shame of Onanism as grounded in the old shame of concupiscence then the stakes of a history of the solitary vice has to account not just for ‘a new relationship between self and society but [the] self’s relationship to the self,’ as Taylor observed. ‘We are none of us, female or male, masters in our own house,’ she writes – Augustine redux without original sin.  She concludes with a Freudian twist: ‘“Shame” Jacqueline Rose wrote recently, “is one of the ways we try to forget part of ourselves,” and it is this amnesia that ultimately lay behind the masturbation panic.’ 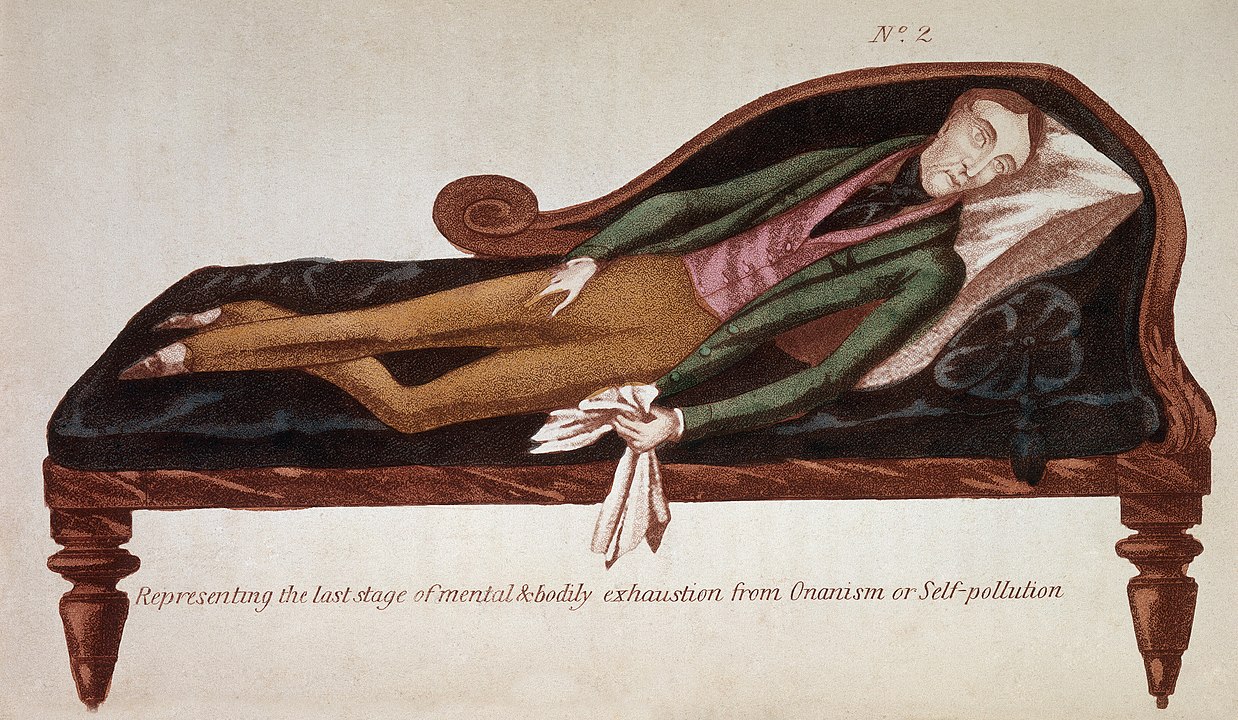 ‘Representing the last stage of mental & bodily exhaustion from Onanism or Self-pollution’ An illustrtation from R.J. Brodie & Co.’s 1845 tractate ‘The secret companion, a medical work on onanism … and on venereal and syphilitic diseases … followed by observations on marriage.’ Image by Wellcome Library, London, CC BY 4.0 via Wikimedia Commons.

We do not have to choose between these perspectives. On the one hand, there is the novelty of a new pathology of solitude that cannot be explained by adducing an abiding engine of shame.  Something changes in or around 1712 that demands an explanation. On the other hand, we need to account for the wild success of a Grub Street pamphlet that makes its way into the inner sanctums of the high Enlightenment and generates torrents of guilt at a practice that before had received almost no attention. It somehow mobilized a deep disquietude about the self’s relationship to its desires that did not suddenly appear with the early philosophes.

I propose briefly to make the case for my history of self and society. That is, I want to offer an explanation for what it was about solitary sex, as opposed to sex that was not practiced in solitude, that was purportedly so dangerous – medically and morally – in the particular circumstances of the eighteenth century and beyond. By offering the sketchiest of sketches of a social and cultural history of shame, I then want to return to Taylor’s argument about the persistent shamefulness of this one particular form of sexual activity – sex with one’s self – that had for so long gone unnoticed. Shame is an emotion that precisely bridges the space between society and self, outer and inner.

As Protagoras tells Socrates, after Prometheus had distinguished humans from other animals by giving them fire, Zeus gave them all equally both shame (Aidos) and justice, a sense of moral order, (Dike) so that they could live together in harmony. I will end with a modern redemptive twist on the solitary vice as a form of healthy self-discovery in solitude.

There is no question that that there is something specifically modern about the medical and moral anxiety surrounding sex in solitude. It emerged more or less from nowhere around 1712. The editors of the most exhaustive of the nineteenth-century medical encyclopedias gave over twenty-six pages and a long bibliography to its article ‘Onanisme’ because the author thought that no problem more deserves the attention of philosophers and doctors, as it represented a conjuncture of private health and public interest.

And while a long line of Church fathers and the theologians who followed them developed an exquisitely refined hermeneutics of sexuality – concupiscence was a central but by no means the only issue – they had almost nothing to say about solitary sex. St. Thomas Aquinas includes what we might interpret as the act under ‘mollities’ (from the Latin mollis for a condition of softness), but it is one in a long list of non-reproductive sexual acts that are not singled out as especially noteworthy. One unpublished fourteenth-century tract by Jean Gerson which Foucault in the History of Sexuality vol. 1 regards as one of the sources of later discourses of masturbation, does seem to address the subject, but it is a rare exception that proves the rule.

What then is the problem that beginning in 1712 captivated Europe’s  – and later the whole world’s – doctors and moral philosophers and through them made men and women, boys and girls guilty and ashamed of a practice that in earlier ages would have passed notice? It was not sexual excess per se. S.A.D. Tissot, whose 1759 book on Onanism was translated into twenty languages over hundreds of editions and became the foundational text of modern masturbation, thought that it was ‘far more pernicious than excesses with women’ because these were mitigated by some measure of reciprocity and engagement. (Although much was made of the dangers of solitary sex, for women no one made the argument that it was more dangerous than excesses with men; in the case of children, it did not apply.

A central problem with solitary sex as understood by the canonical text of the Enlightenment was that it was generally driven from within, driven by a ‘voluptuous, a fiery imagination’ that had only the most tenuous connections with all those charms, tricks, arrangements and physiological natural processes that drive a more social passion.

‘If he [an educator’s pupil] were to know one time the dangerous supplement’ as a way of satisfying his sexual instincts, ‘he is lost’, declares Rousseau unequivocally. Not only would ‘he carry the doleful effects of this habit, the most disastrous to which a young man can subjugate himself, to the grave’, but by the very act he would be lost to his teacher.

Ambivalent as Rousseau’s feelings were about the role of society in making us who we are, society still offered grounds for redemption. Pure interiority was harder, perhaps impossible, to reach. And pure interiority, driven by the possibility of endless, self-generated sexual pleasure was the most extreme case. ‘Deceitful’ and ‘counterfeit’ were the adjectives that came to Rousseau’s mind when he described the teacher’s worry in Emile about the collapse of his whole educational project should his pupil succumb to the secret vice. 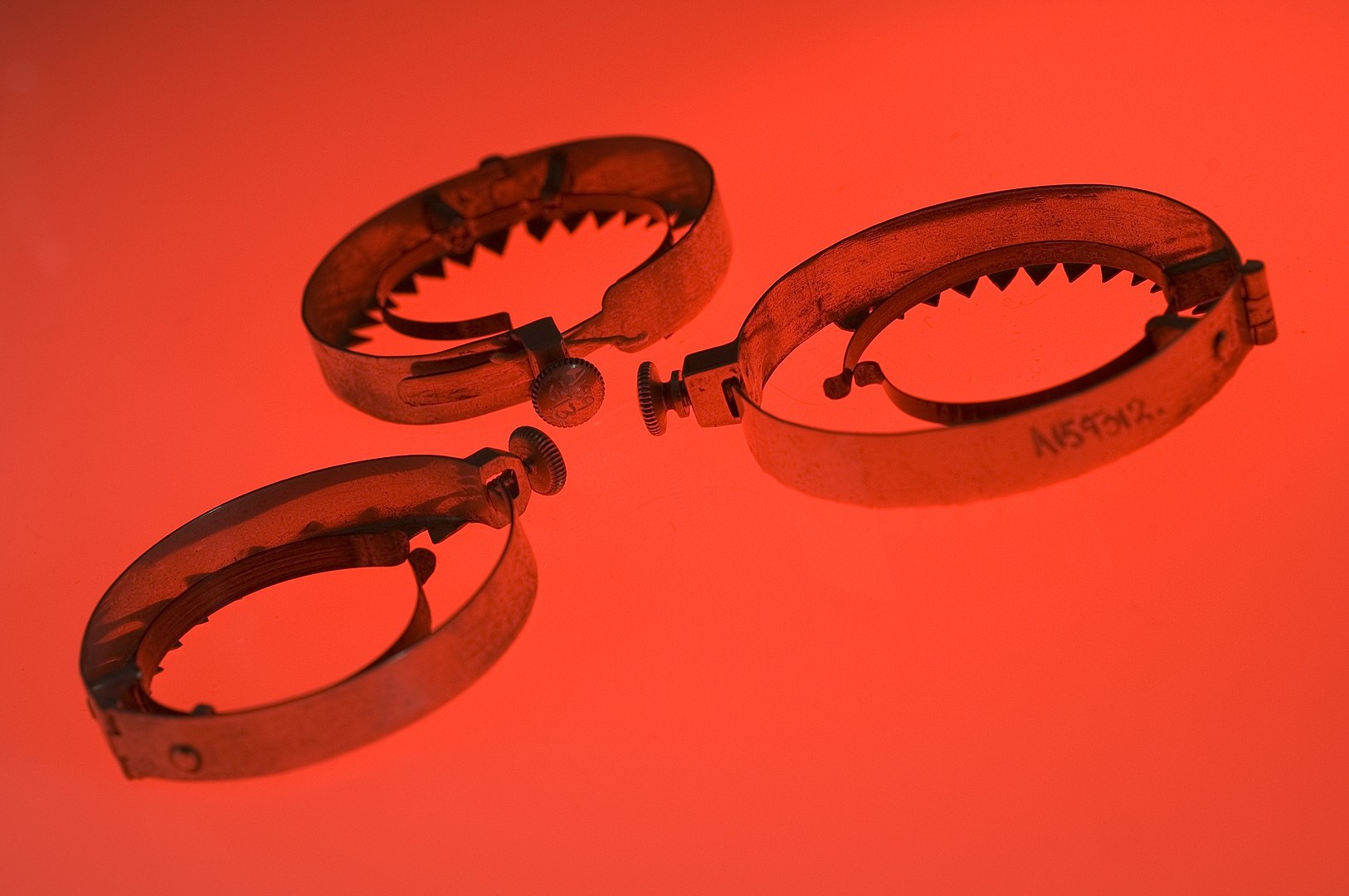 Late 19th century male anti-masturbation devices, the likes of which were often used in mental institutions, and sometimes in the home. Photo by Wellcome Library, CC BY 4.0 via Wikimedia Commons.

Taylor is right. For the old-fashioned ‘concupiscence’ – desires of the flesh as a sign of the estrangement of the soul from God, of the lack of singleness of heart – we could substitute ‘the fiery imagination’, something unbounded that could not be laid to rest, even if the doctors and moralists of the eighteenth century wanted to distance themselves from so theologically loaded a term.

And she is right that ‘Protestantism, by drawing God – and the devil – into the individual psyche upped the ante. The inner world of the believer became a cosmic battleground, with sex as its front line.’ But it is not the only line of battle. A fiery imagination stimulated by the passions, as Taylor writes, ‘led believers to confuse inner states with outer objects, to mistake their own desires and fantasies for the living God,’ that is, to succumb to the dangers of Enthusiasm. I might add that other forms of secular concupiscence were also creatures of the Enlightenment; ‘alcoholism’ was another eighteenth century neologism.

The question remains why this one particular sign that we are ‘none of us, male or female, masters of our own house,’ – this act of solitary sex –  became a new, lasting and paradigmatic engine of shame. If the gods gave humans shame to allow us to live together, the pedagogues, doctors, and philosophers of the Enlightenment worked so hard to make sex with ourselves shameful in an effort to allow us to live alone. It was a hard road to make something private and solitary shameful because shame is an emotion evoked in public through the real or imagined gaze of others. It was their project to make it shameful in the eyes of the self. And, in the long Augustinian tradition, they located it in the desiring flesh – an asecular appropriation of concupiscence.

But solitude still bears something of the sense that it is had behind closed doors and is therefore suspect. There is a passage early in Proust’s Swann’s Way in which the narrator, certainly no enemy of the imagination, writes of a room at Combray: ‘it was the only room whose door I was allowed to lock; whenever my occupation was such as required inviolable solitude, reading or day-dreaming, tears or sensual pleasure’.

News: Viking Aton to join fleet in Egypt next year

‘Colour Is the Keyboard’ Music & Art throughout Modern History

The Haunted Visions of Otto Dix