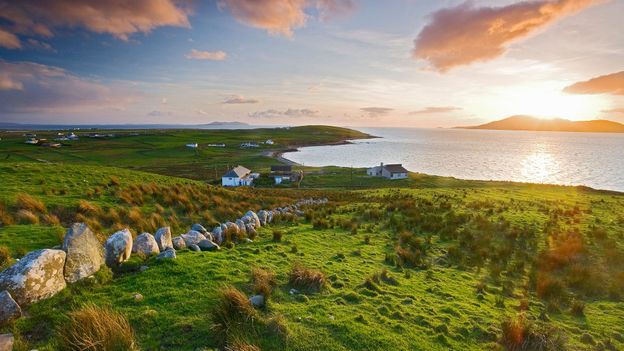 My mother first told me the tale when I was three years old. Somewhere, in a forest near her hometown of Swinford, Ireland, lay the buried treasure of a folk hero who gave power to the powerless. More than 200 years ago, while Ireland’s County Mayo was patrolled by British soldiers, controlled by English gentry and riven by poverty, one group of Irish men launched an unconventional revolt.

They didn’t seek to end British rule, or even take back their families’ land. Instead, armed with blunderbusses and an intimate knowledge of Mayo’s mountains, bogs and rivers, these outlaws used surprise and force to reappropriate the wealth of Ireland’s British landlords. Like England’s Robin Hood before them, they robbed the rich and gave to the poor. Irish legends soon developed about their ferocity, ingenuity and generosity.

None of these highwaymen was bolder than Mayo’s Roger “Captain” Gallagher. As a young boy growing up in Australia, I cheered as my mother recounted the stories of him ambushing Ireland’s privileged British occupiers, winced when he was fired upon by soldiers, held my breath as he charged them on horseback and exhaled when he left them in his wake.

Now, as an adult, I’ve realised these stories revealed how my ancestors were subjugated by the British, and the way acts of rebellion gave hope to this downtrodden corner of western Ireland. As the Republic of Ireland prepares to celebrate the 100th anniversary of the Irish Free State and a century of independence from Britain in 2021, Gallagher’s tale offers a little-known example of Irish dissent against the occupying British.

With my 72-year-old mother by my side, I recently followed in Gallagher’s footsteps through Mayo. From Attymass to Barnalyra, Roosky to Lough Talt, we visited locations where Gallagher and his gang of bandits tormented affluent British landowners from the late 1700s until his death in 1818. It was a fascinating excuse to explore the verdant forests, pristine lakes and craggy hills of a county where I’d lived on and off for eight years. More importantly, it allowed me to bond with my mother and absorb her passion for Mayo’s wild landscape and rich history before I had to fly back to Australia.

Our pursuit of Gallagher’s ghost began in a place my mother and I knew well. Hemmed by mountains, the glassy lake of Lough Talt long is one of our most cherished locations in Mayo. It is a place where we walked and laughed with my late father, whose passing four years ago drew us even closer. Gallagher was also partial to this lake. As we sat on its shore, with the Ox Mountains peering over our shoulders, my mother explained how Gallagher and his men emerged from nearby trees, firearms cocked, and held up mail coaches laden with the valuables of local British gentry. Suddenly, the bandit was brought back to life.

Gallagher was a character so large that, as a child, I could see him clearly from 15,000km away in Perth. My mother used his tales to connect me with my Irish heritage and, when she felt marooned in her new home of Australia, to transport herself back to the wilderness of Mayo.

Despite being a lead character of so many historical Mayo legends, there’s surprisingly little public recognition of Gallagher today. There are no statues of him anywhere in Ireland. Printed records of his life are limited. I contacted almost every university history department in Ireland and found that no-one knows much about the man’s life. One of the very few experts who does is Stephen Dunford, a historian and writer from Killala, a tiny Mayo village about 15km north-west of Gallagher’s old stomping grounds. Dunford wrote The Irish Highwaymen, the definitive book on these bandits, so named because the robbers typically assailed their victims as they travelled the roads.

To understand Gallagher and his colleagues, Dunford told me, you must first know the environment and era that birthed them. By the time Gallagher first raised a weapon, Ireland had been occupied by the British for 600 years. Recollections were fresh of the atrocities of the mid-1600s, when English general Oliver Cromwell invaded Ireland, quelled an Irish rebellion and his troops likely slaughtered thousands of civilians – including women and children – in the process.

You may also be interested in:
• A shipwreck undiscovered for 47 years
• Is this the world’s most dangerous sea route?
• A father-and-son pilgrimage on the Tour du Mont Blanc

Under Cromwell’s direction, many Irish landowners were dispossessed. Their farms were given to well-off Brits, who acted as landlords, charging the Irish to live on the same land that had been in their families for centuries. Income generated from these properties, through rent and agriculture, went into British pockets. According to Dunford, Mayo became one of the poorest corners of Europe and stayed that way for centuries thereafter.

“The Irish people knew why they were destitute, they knew exactly who to blame,” Dunford said. “The British were villains. People in Mayo, who had nothing [and] couldn’t even feed themselves properly anymore, were looking at their old homes and old land and then seeing Brits living in them. Then along came Gallagher and his boys, plundering the rich Brits and everyone loved it. Ireland desperately needed some heroes at that time, they needed something to believe in, and the Highwaymen gave them that.”

Robbing powerful Brits was, of course, a dangerous occupation. It earned the attention and wrath of police, British soldiers and armed mercenaries hired to protect these landlords. While being hunted, Gallagher needed somewhere to hide, to regroup, to plan his next heist.

Start your journey at one of County Mayo’s most beautiful lakes, Lough Talt, before driving south to Aclare. Then head west into the Ox Mountains to Roosky, where Gallagher often hid. On the other side of this range, you’ll reach Attymass, where Gallagher met his demise. Then head south to his birthplace of Ballycong.

“That’s a great spot to avoid detection, isn’t it,” my mother said to me, pointing at Glass Island in Lough Conn, which served as one of Gallagher’s safe havens. These days, the narrow, 13km-long lake is a popular swimming destination on the odd occasion it exceeds 20C in Mayo. A smile broke across my mother’s face as she recalled me wincing from the cold when I bathed here as a boy on holiday.

While Gallagher relied on refuges like Glass Island, he wasn’t intimidated by his pursuers, Dunford said. Gallagher had the skills, motivation and courage to survive his perilous trade for two decades. He and his cohorts had extensive military training and, crucially, the support of locals who related to Gallagher’s impoverished upbringings in Ballycong, a tiny farming community in the shadows of the Ox Mountains.

But according to Dunford, what really earned the respect and loyalty of locals was the generosity of Gallagher’s gang. After robbing mail coaches, they spread their spoils through the community. They also tried to protect Irish peasants bullied by British landlords.

“Gallagher made a British landlord eat his eviction notices right here,” my mother said, as we drove into Killasser, the tiny town where this bandit stood up for dozens of Mayo tenement farmers who were being unfairly tossed out of their homes. Ringed by gently sloping green pastures and boasting little more than a church and a pub, Killasser is indicative of dozens of quaint, idyllic villages sprinkled across County Mayo.

While Killasser itself may not be remarkable, according to Dunford, what Gallagher did here was extraordinary. When he and his men raided the plush home of this ruthless landlord, they discovered a stack of eviction notices, gathered them up, and demanded the Brit consume them. He was convinced to comply by the gun pressed to his temple.

The Highwaymen had dual motivations, Dunford said. First and foremost, they were driven by a desire to help the county’s impoverished residents. But they also knew this charity earned the allegiance of Mayo locals, who would warn them of pursuing authorities and offer them safe haven. Eventually, though, Gallagher’s fortune ran dry in a perpetually rain-soaked land. In 1818, he was hiding in a cabin in Attymass, a picturesque village in the foothills of the Ox Mountains, when he was spotted by a local man with British loyalties who tipped off the soldiers hunting him. Soon, Gallagher was surrounded by 200 British fighters.

As he faced execution, Dunford said that Gallagher made one final play. He told the soldiers of a haul of valuables he’d buried in the nearby Barnalyra forest and promised to reveal its location in exchange for freedom. It didn’t work. As soon as Gallagher had been killed, soldiers descended upon Barnalyra, combing the land for days to no avail. Many a treasure hunter has since entered those woods with lofty hopes and exited with vacant hands. The lure of this concealed fortune continues to propel the legend of Gallagher.

Yet, more than a cartoonish hero or a colourful folk character, Gallagher is a symbol of Irish defiance. That’s what my mother reminded me as we drove beyond Attymass, through the mountain gap at Roosky, flanked by lakes, ridges and meadows so glorious it’s no wonder Mayo people didn’t want them occupied. “This is your land, too – your past,” she said to me, her tone and expression so earnest that I received it as a plea to keep Mayo with me when she’s gone.

I grasped her hand and allayed her fears. Mayo might not be my full-time home, but its imprint on me is permanent. So, too, is Gallagher’s legacy. Forever this county’s sharp winds will carry the tale of an outlaw who challenged the British, galvanised Mayo and enthralled an Australian boy sitting on his Irish mother’s knee.

Travel Journeys is a BBC Travel series exploring travellers’ inner journeys of transformation and growth as they experience the world.

This vacation hotspot is offering vaccinations to visitors