The football quarterback and activist takes to his Twitter account to react to the casting news for ‘Colin in Black and White’, sharing a side-by-side picture of himself when he was younger and Michael.

AceShowbiz –
Upcoming Colin Kaepernick series on Netflix has found its young Colin on Jaden Michael. Michael has been cast to play the former NFL quarterback and civil rights activist on “Colin in Black & White“.

The six-episode series will center on Kaepernick’s childhood as a young African-American teen growing up in a white adoptive family. The limited series will also show how his experiences shaped his football talent. It will also explore Kaepernick’s journey to become a civil rights advocate.

Michael’s credits include Netflix’s “The Get Down“. The 16-year-old also appeared in some episodes of “Gotham” and “Blue Bloods“. He also played the lead role in Lorne Michaels‘ comedy “Vampires vs. The Bronx“. His additional credits include Todd Haynes’ “Wonderstruck” and indie movie “Custody” which also starred Viola Davis and Ellen Burstyn.

In response to the casting news, Kaepernick took to his Twitter account to gush over Michael. Sharing a side-by-side picture of himself when he was younger and Michael, the athlete wrote, “I never thought I would be casting a young me in a show about my life. I can’t wait for the world to see @ItsJadenMichael be an all-star on @netflix #ColinInBlackAndWhite @ava.” 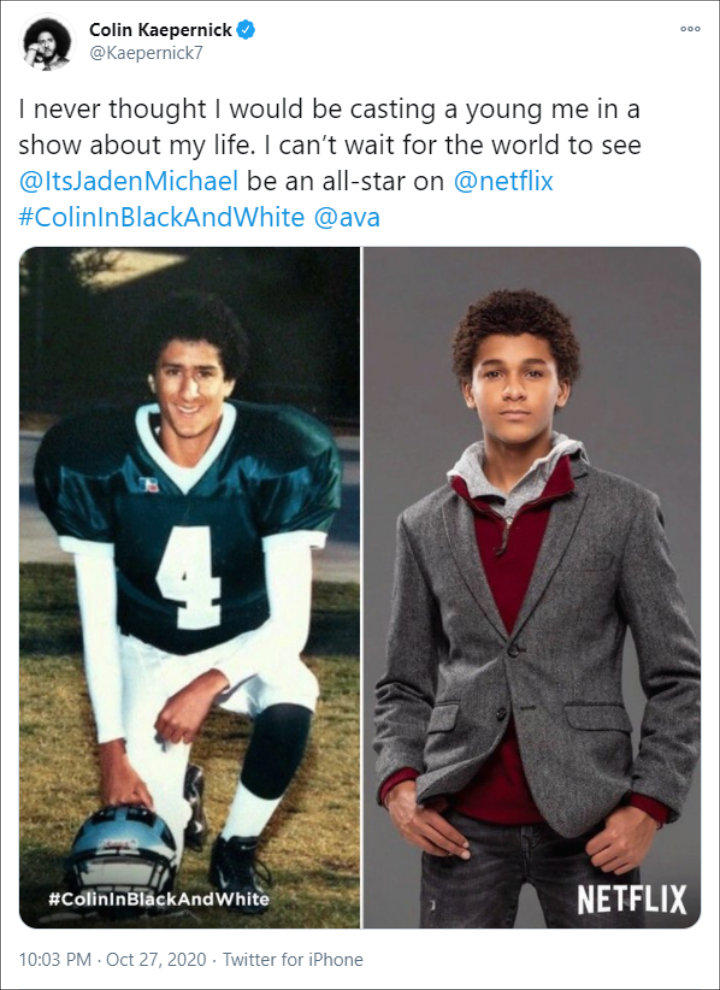 “Colin in Black & White” will have Ava DuVernay directing its first episode. Meanwhile, Michael Starrbury, who previously teamed up with DuVernay on Emmy-winning series “When They See Us“, has been tapped to pen the script for the series.

In addition to narrating and appearing on the show as himself, Kaepernick serves as executive producer. He is joined by DuVernay and Starrbury.

Kaepernick has set multiple records and won numerous accolades while playing six seasons in the NFL for the San Francisco 49ers. He made headlines in 2016 after starting kneeling campaign during the national anthem before games in protest of police brutality and systemic racism in America which led to him not being hired by any team on NFL. After filing a lawsuit against the league, they reached a settlement in 2019. He’s still a free agent player as of now.

Netflix has yet to reveal a premiere date for “Colin in Black & White”.

IATA warns governments must help or airlines will fail